So, in building with Ajani, Strength of the Pride, what are we looking for?

Okay, so to start with, Ajani’s Pridemate itself is actually legal. 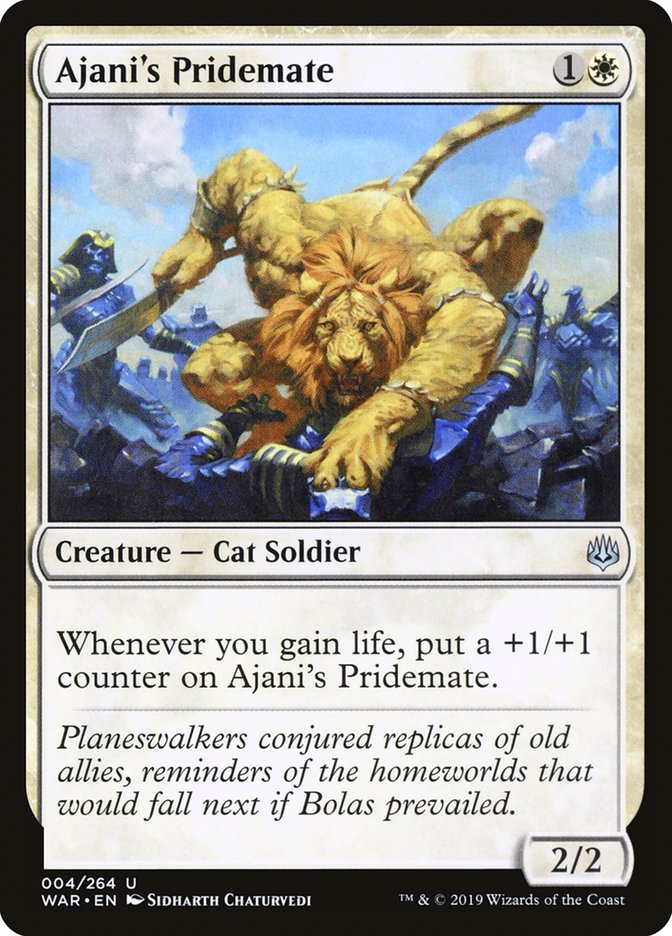 This is super-convenient because it means we can be very focused on building around it. One thing we do have to be mindful of, however, is that this may give us increased vulnerabilities in some areas. For instance: 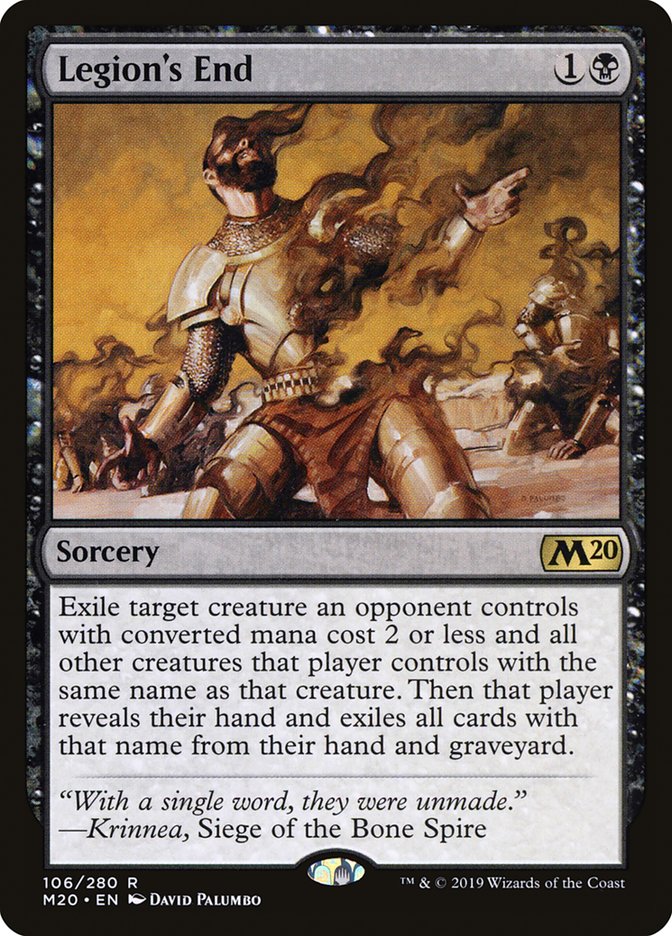 Legion’s End is an interesting Smother variant to start with. It may be sorcery-speed and only hit two-cost or less, but the ability to sweep multiple creatures can be huge when you hit. This can obviously just hit two copies of the same thing: two Tarmogoyfs are on the battlefield, or one on the table and one in their hand. Alternatively, it can be used to kill a bunch of tokens, since they all have the same name. Ajani’s Pridemate is particularly vulnerable here, as both the Pridemate in your deck and the token created by Ajani, Strength of the Pride have the same name.

The other thing Legion’s End has going for it is the exile clause, which even matters against actual copies of Ajani’s Pridemate, since it means they can’t be reanimated by Ajani, Adversary of Tyrants or Sorin, Vengeful Bloodlord. 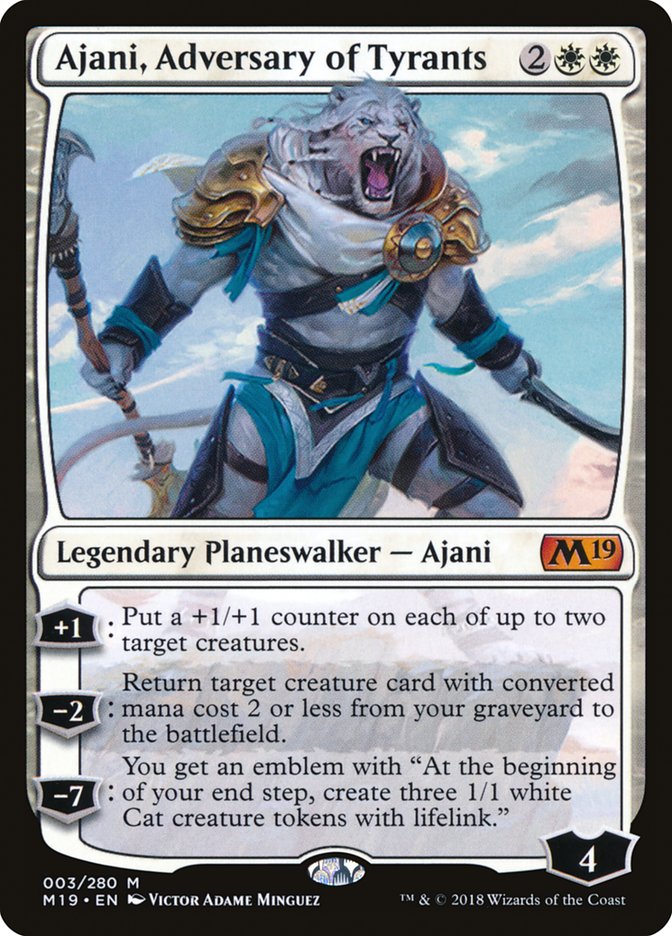 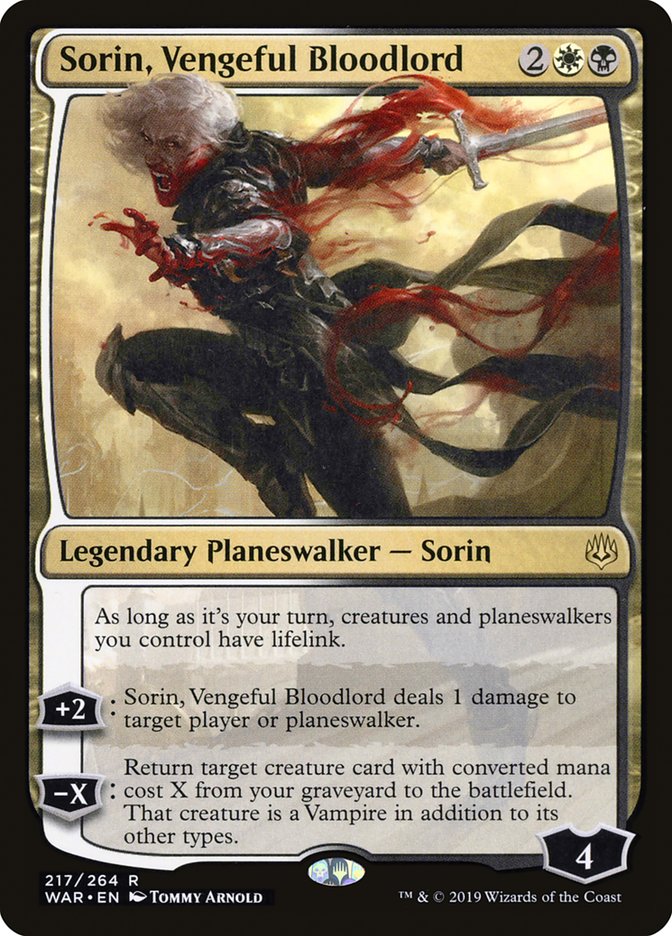 It could also be exciting for fighting Gravecrawlers and Bloodghasts, though it is, unfortunately, disappointingly weak against Carrion Feeder and Altar of Dementia (since sacrificing the target will fizzle the rest of the spell).

So, what kind of a deck could be really into Ajani’s Pridemate?

Yeah, I mean, sure, you could go this route. The thing is, this isn’t actually the best Ajani’s Pridemate deck or anything. It’s good here, sure, but we’re already going so wide and looking to buff our creatures. Besides, this deck is not actually very good at defense at all, and stalling the game out isn’t really gonna be great for us, Ajani or otherwise. 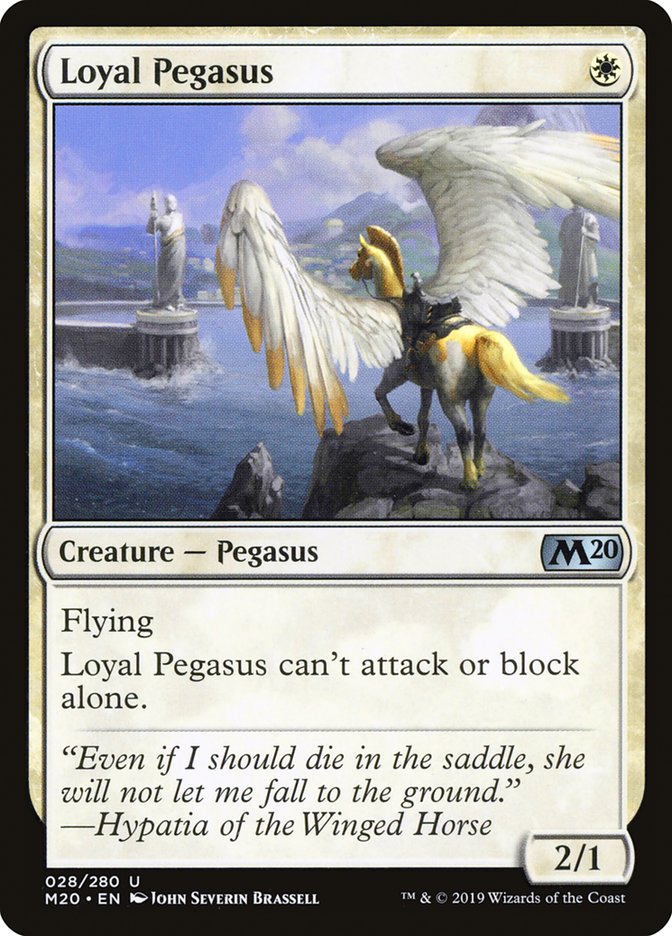 As for as Mono-White Aggro goes, I can’t help but wonder if being super-duper all-in on one-drops is actually the place to look. I would definitely keep an eye on whatever Tom Ross cooks up in this department. 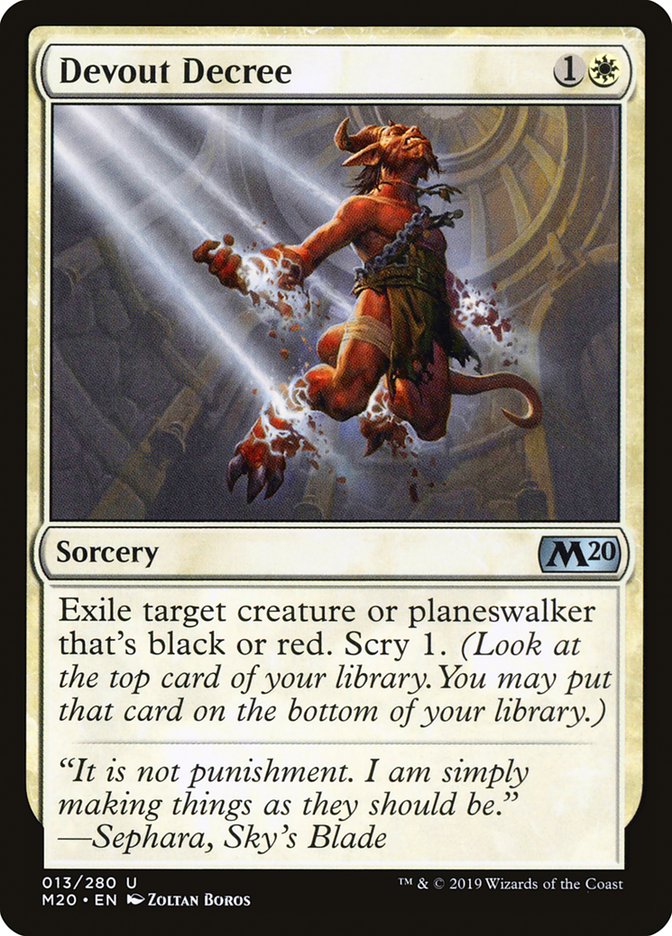 Whatever white deck we’re looking at, you’d better believe we’ll be wanting Devout Decree. While the inability to hit Blood Moon basically invalidates it for Modern, in Standard, it’s mostly a sorcery-speed Celestial Purge that picks up scry 1. 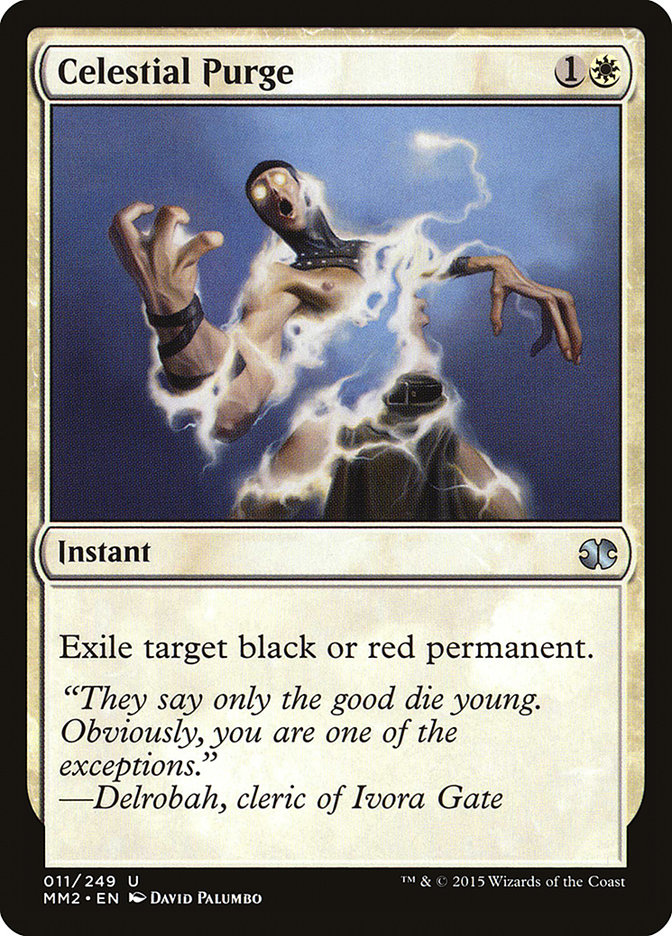 Having such a versatile answer to proactive threats and big planeswalkers alike is a great option for sideboards. You do have to be careful, however. The black and red threatening permanents may be mostly creatures and planeswalkers, but there are a few enchantments out there. 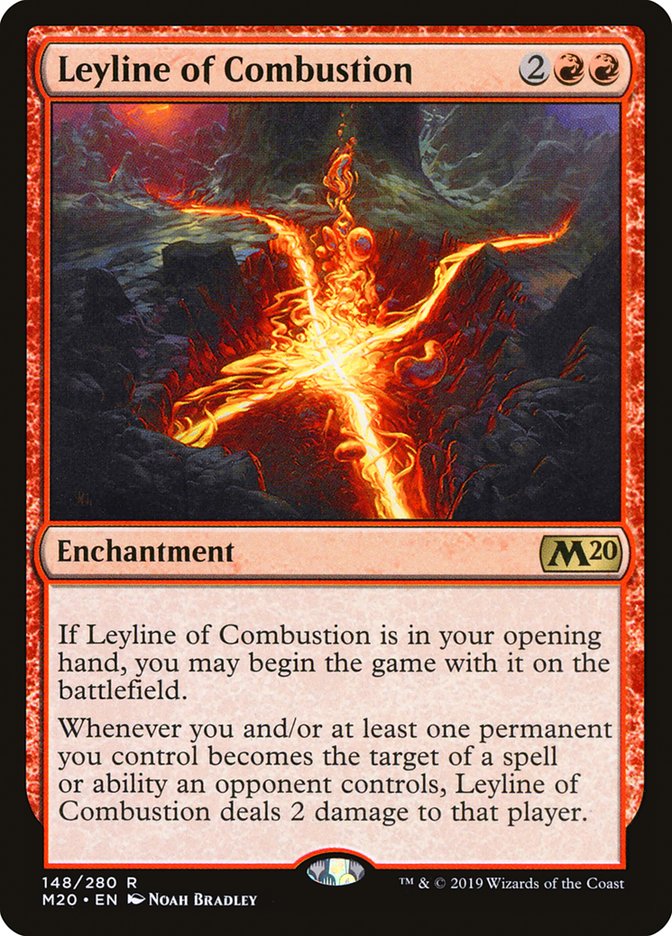 As for Ajani’s Pridemate, I think we’ve got to look bigger. One intriguing path to pursue may be to build around Angels, now that Bishop of Wings gives us such a powerful and potentially synergistic payoff. 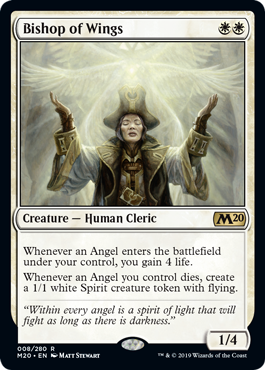 For starters, a 1/4 body for two is already a little unusual. It’s also quite efficiently distributed for making life hard for red aggro. Even if you never trigger the lifegain ability in some games, you’re not necessarily doing so badly. Trigger it even once, however, and you’ve already turned a profit. I mean, there are plenty of spots where a 1/3 for two that gains you three life would be great. Once you move that up to a 1/4 for two that gains you four life, you are kind of killing it already. 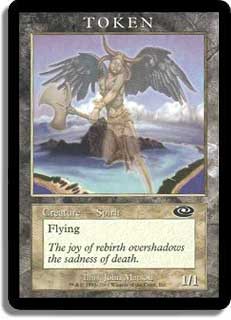 And as if that wasn’t already enough, there’s even a little extra juice in the form of the 1/1 Spirits with flying you get as compensation for your Angels dying. 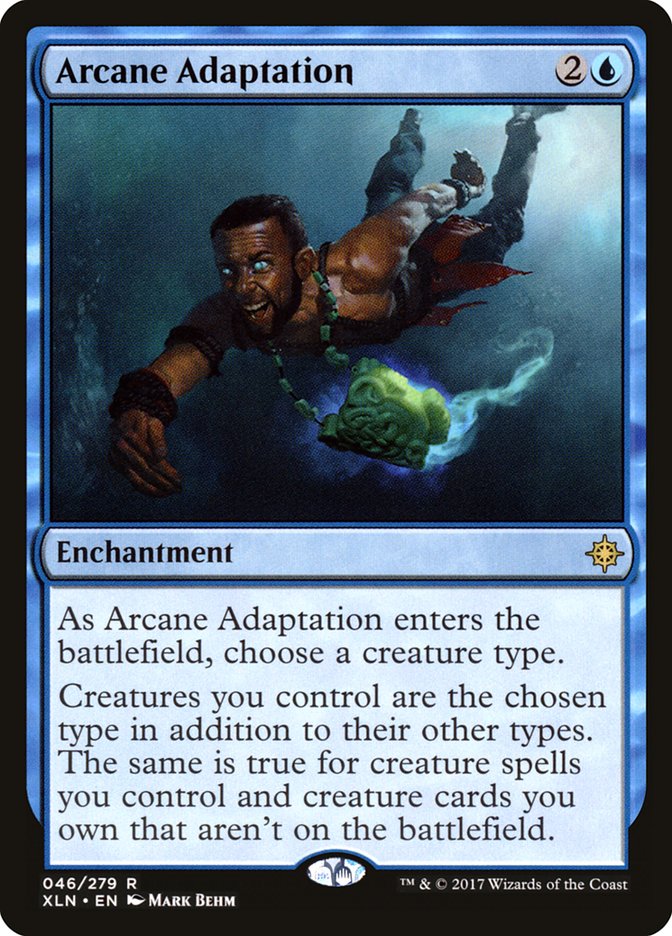 If you want to go extra deep, Arcane Adaption makes all your creatures Angels. Now every creature you cast will gain you at least four life from your Bishop of Wings. What’s more, if you can find a zero-mana sacrifice outlet, you can go infinite. For instance: 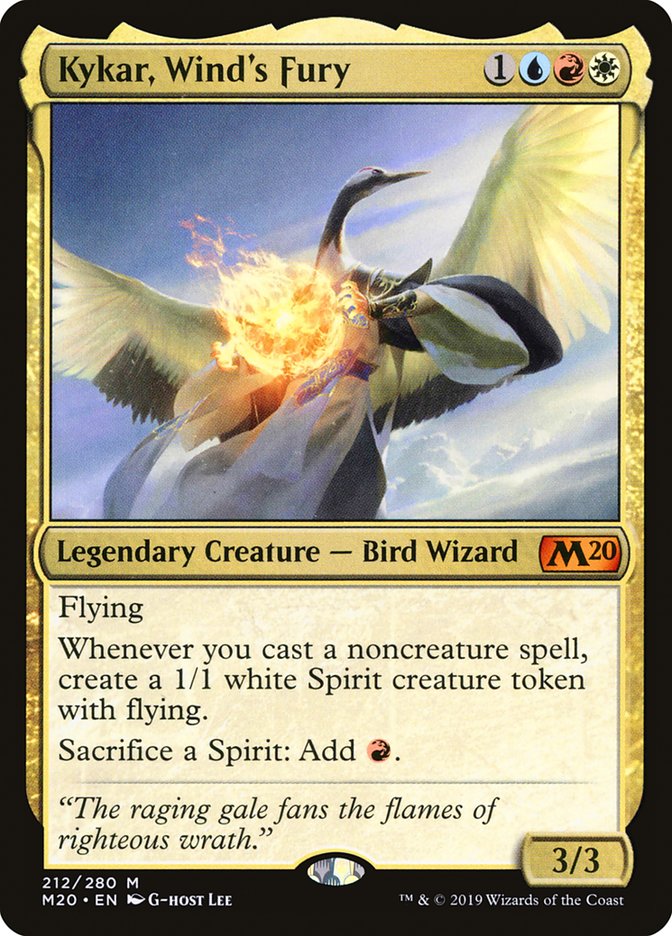 With Kykar, Wind’s Fury, you can sacrifice Spirits to make red mana. If you have Bishop of Wings, you will get a 1/1 Spirit every time you sacrifice an Angel. If you have Arcane Adaptation, those 1/1 tokens will be Angel Spirits, meaning they replace themselves every time you sacrifice one. All you need is something to get the party started, which can be another Spirit (like Thoughtbound Phantasm or whatever), a token created by Kykar (from casting any noncreature spell), or a creature that dies, triggering Bishop of Wings (like Fanatical Firebrand or Skirk Prospector).

Hrmm, that’s a lot of moving parts, but there could be something there… 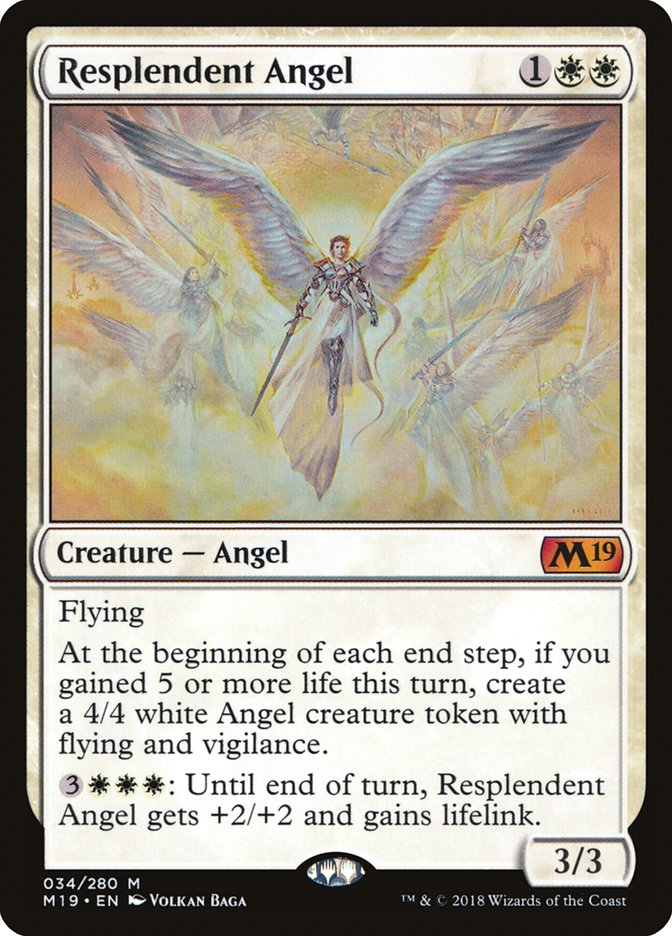 The most obviously good and on-plan way to do this in-color is with Resplendent Angel. I mean, yeah, of course, Lyra Dawnbringer can be in the discussion, but Resplendent Angel comes down earlier and occupies a spot on the curve with a little more wiggle room (while also working fantastically with Lyra). Unfortunately, Bishop of Wings only gains four life, so we’ll need one more source of lifegain to then trigger Resplendent Angel’s ability. Maybe we’ve got a Healer’s Hawk or a Diamond Mare or a Leonin Vanguard or a Legion’s Landing token, but even if we don’t get there, it’s not necessarily that big of a deal. 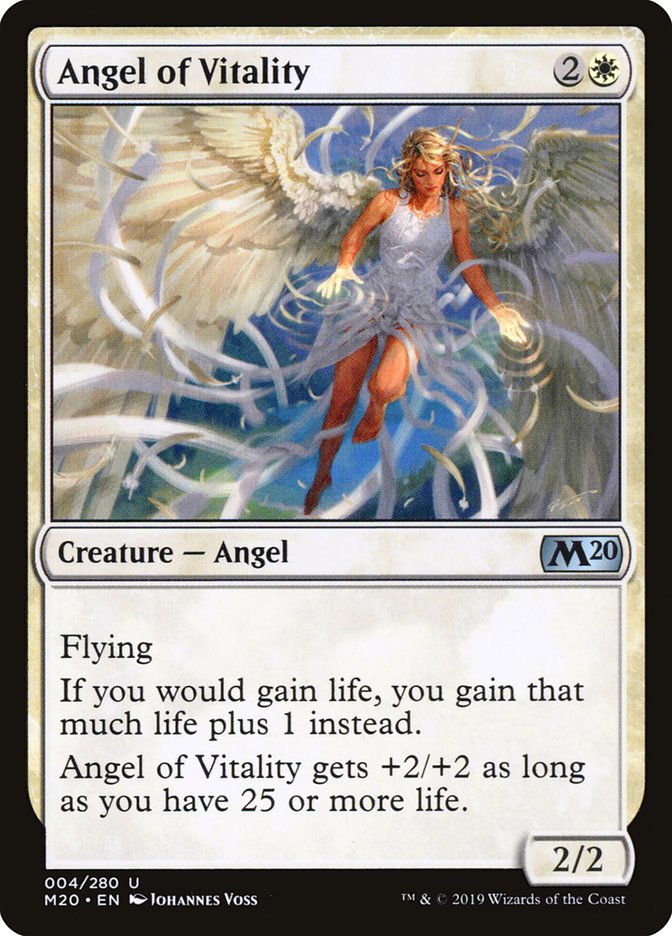 Angel of Vitality is a bit more modest of a rate than Resplendent Angel, but gosh darn is it good with Bishop of Wings. First of all, the +1 to lifegain ability means the Cleric is gaining us five instead of four. This means we’re all the way up to 25 right away, making Angel of Vitality a 4/4 flier for three (best-case scenario). What’s more, gaining five life per Angel means any Angel will be enough to trigger Resplendent Angel (which will then give us another Angel and another five life).

Sketching out a Mono-White Angels deck really reveals how much of a weakness we have when it comes to removal.

Surely there’s got to be something we can cast for two. I mean, we can’t really be stuck playing Pacifism, right? 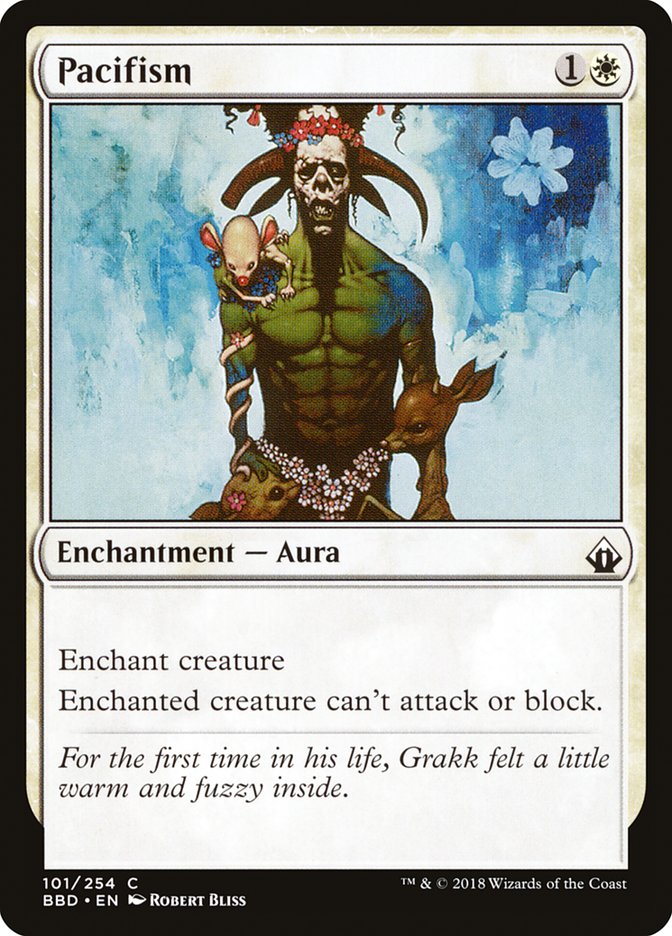 I like that this list is a lot better-suited to playing defense, and Cryptic Caves is kind of a great fit here. I’m not sure how many we will feel comfortable playing, as Bishop of Wings on Turn 2 is important, but the card seems solid. 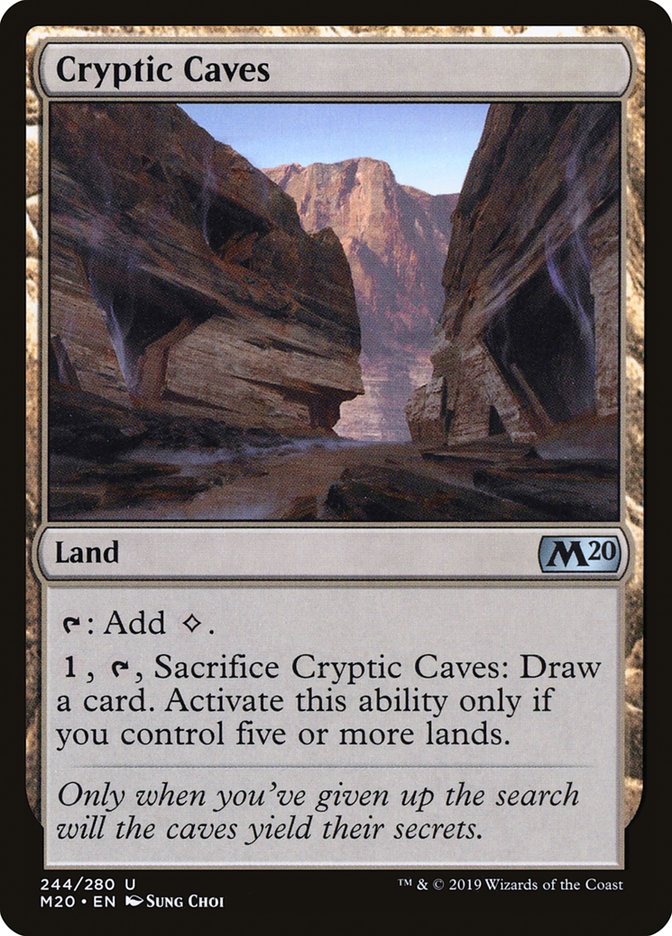 It’s kind of a Horizon Canopy, but instead of the painful part of Brushlands, we’re getting the “tap for colorless” part. We won’t be able to cash it in until a little later, but this deck is trying to get up to five mana anyway. 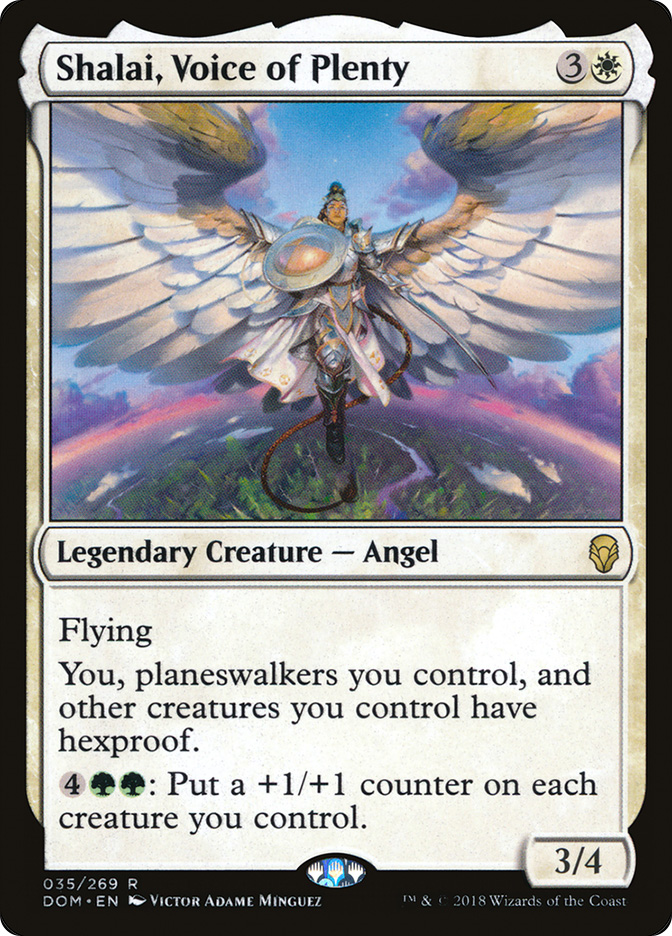 Yeah, we could be interested in Shalai, Voice of Plenty, with or without a green splash, but we do have to be careful of how many fours we are packing. If we’re okay cutting down on Ajanis, we could get a little Shalai action in here, though. 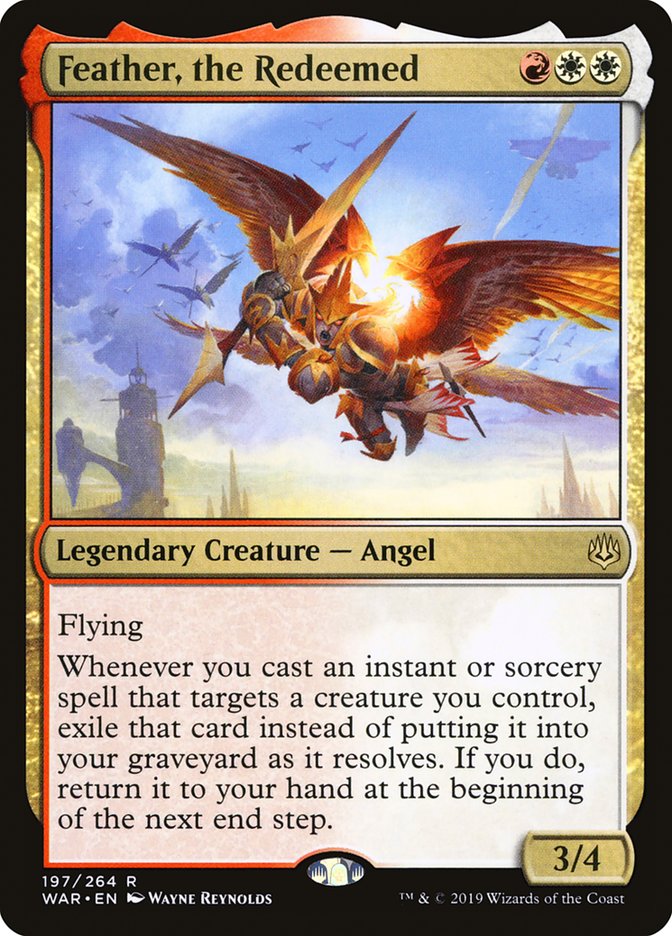 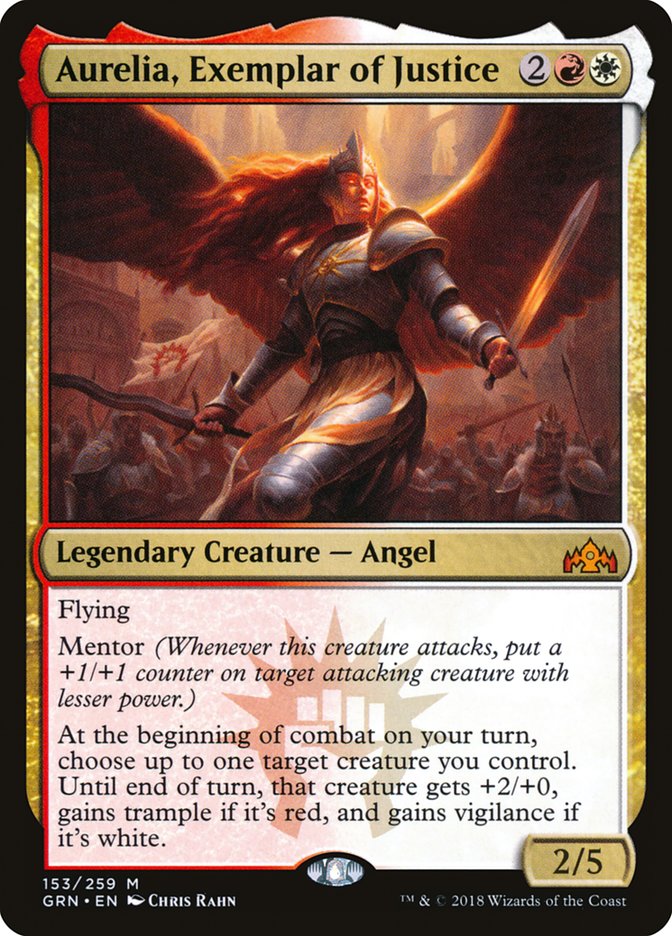 Splashing red gives us some serious upgrades for Angels, though we are going to have to figure out how much we’re willing to warp our list around Feather, the Redeemed.

It’s kind of awkward playing Feather without much support, but once you go down that path, it’s hard to stop. I mean, only going halfway can be really awkward. Maybe it’s just good enough as a 3/4 flier. I mean, that could be the case. 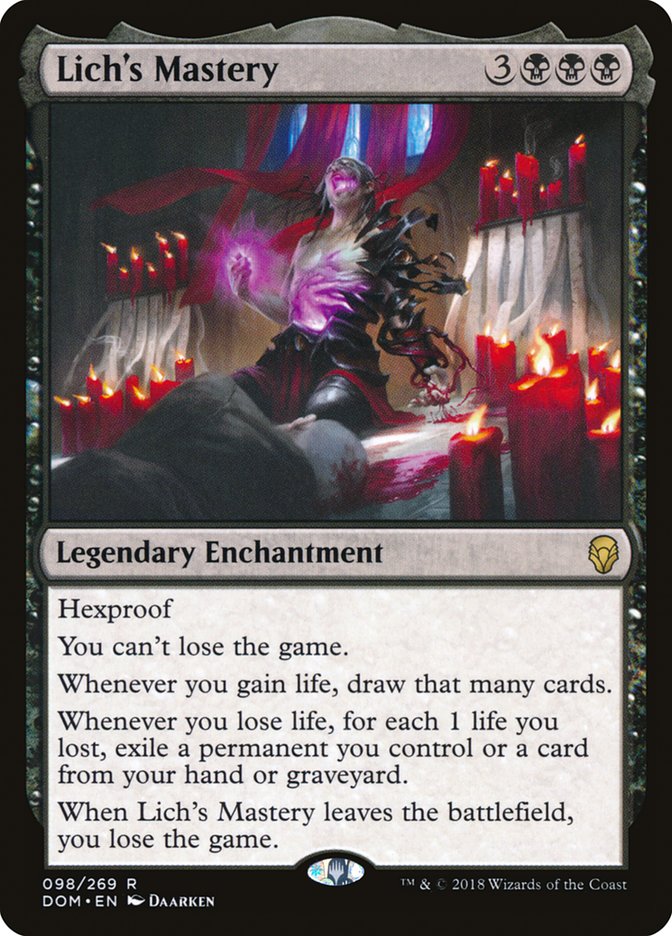 Another really attractive home for Ajani, Strength of the Pride is in some kind of Orzhov deck, whether Lich’s Mastery, Bolas’s Citadel, or some other such lifegain-centric nonsense.

The addition of Bishop of Wings gives us extra reason to consider a creature-heavy build, but I could easily imagine us instead building a more battlefield-controlling midrange-control deck, depending on what the rest of the format shapes up like. 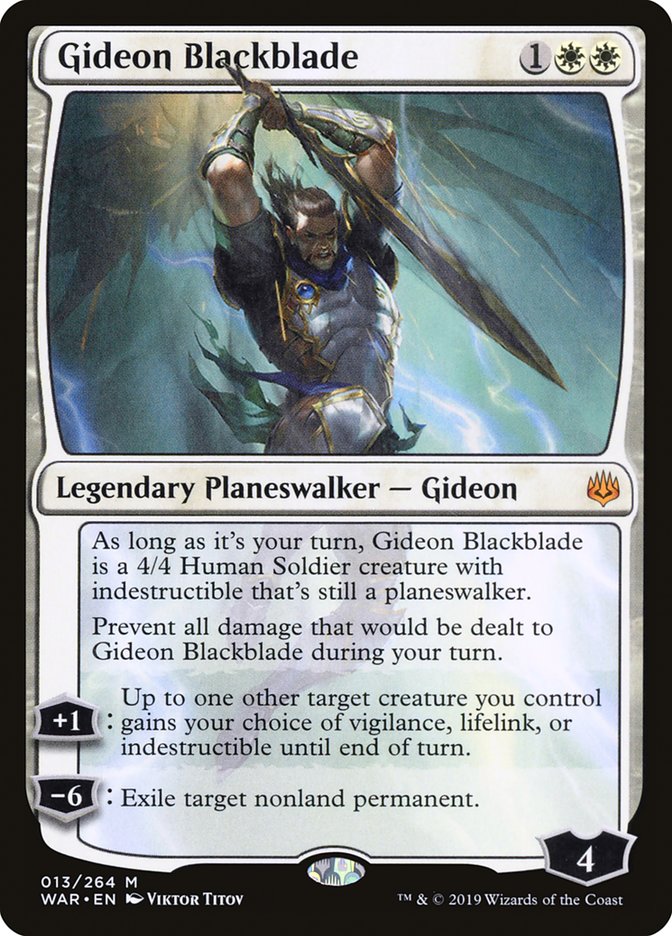 Granting lifelink is a big game! 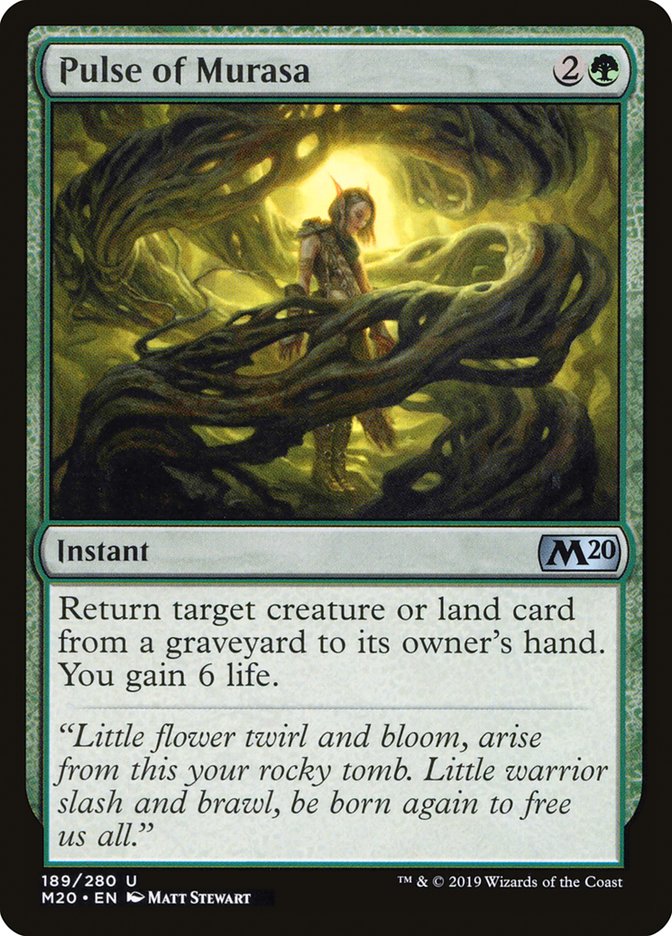 The reprinting of Pulse of Murasa makes me want to figure out if there is a way to get green in here, though. It’s such a powerful lifegain spell, I could imagine it as part of a light splash (particularly with Evolving Wilds!), or something heavier, like with Bond of Flourishing, Wildgrowth Walker, Jadelight Ranger, and Merfolk Branchwalker. Explore is particularly nice for making sure we have stuff in the graveyard to get back with the Pulse.

Ajani, Strength of the Pride is definitely on the opposite end of the spectrum compared to cards like Teferi or Narset. You can’t just throw it into a deck and expect everything to work out. However, if you do the work, he promises to be a fun and rewarding payoff that can completely take over the game.