My issues weren’t even centered around being unable to find the appropriate colors but around having key land drops enter the battlefield tapped. Playing so many fastlands in a deck that wants to use all its mana for the first four, five, or even six turns of the game can lead to a lot of awkward draws, especially if your opening hand is heavy on basic lands. Too often I found myself having to wait a turn to cast my Verdurous Gearhulk or unable to cast both a creature and a removal spell, and those tempo losses were critical. But when the deck hummed along, it was quite good at beating the creature mirrors by simply having access to a more powerful suite of cards and a planeswalker that dominates combat. 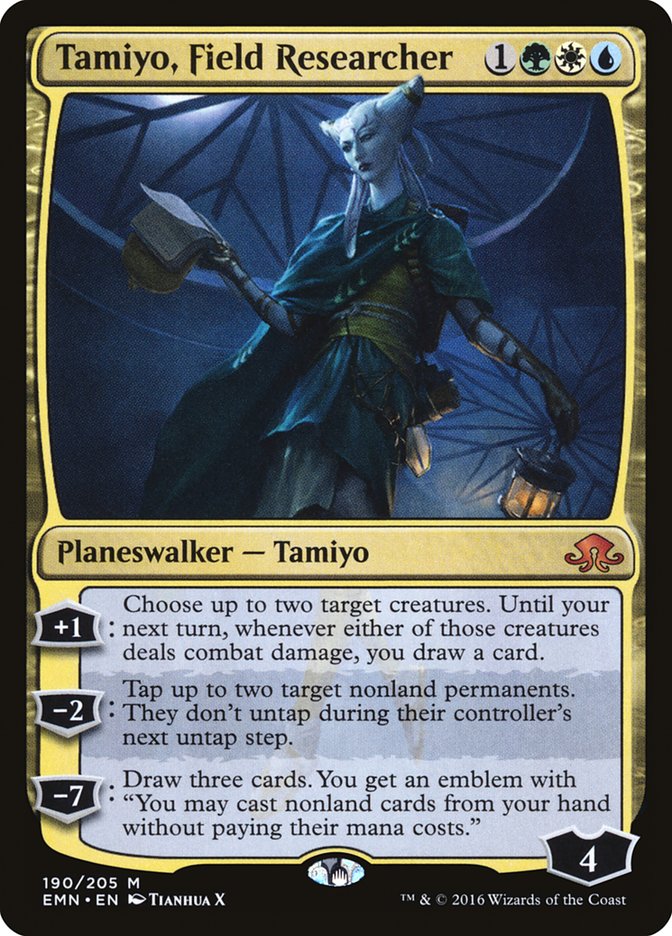 And the metagame ended up being aggressive enough that this deck was a fine choice. Tamiyo, Field Researcher is great at pressing your advantage on the play while buying you the necessary time to catch up while on the draw. The fact that it taps any nonland permanent and not just creatures means that Vehicles aren’t an issue, which is critical. However, Tamiyo, Field Researcher didn’t help against control decks as much as I had hoped. It’s difficult to reliably resolve the four-mana planeswalker unless your opponent has tapped out for something else, that something else almost always being a removal spell on the creatures you’re trying to target with its +1 ability, and the ubiquity of Disallow means that the ultimate is a very risky proposition.

In fact, my expectation of a control-heavy field was another key factor in declining to play this deck. Being reactive seemed like the best way to protect yourself from combo decks while being able to handle powerful creatures. As it turns out, having a consistent aggressive deck that can race the combo sometimes while having a few ways to disrupt it in other games proved enough, leading to a very different metagame from what I expected.

Had I accurately predicted the metagame, I may have had the courage to register the deck I worked on most stridently during testing, only giving up on it a few days before the Pro Tour as the control matchups proved too difficult:

This is the last version of the deck that I had, with Gideon, Ally of Zendikar being the last addition as I continued to stretch the mana as far as possible to help fix the deck’s holes. At one point the sideboard card of choice against control decks was Tireless Tracker, since the Clues have such obvious synergy with Improvise, but card advantage really isn’t helpful here since the deck has such a low threat density. The best way to win against control decks is to resolve an awesome threat like Gideon, Ally of Zendikar or protect the combo, hence the abundance of Dispels over similar cards like Negate or Transgress the Mind.

Honestly, the mana in the deck is so flexible that you can play almost any card in the format, which made the process of tuning it incredibly daunting. I lamented many times over the weekend that I could’ve found the right list had I had more time, but “more time” could’ve meant several weeks. The “best” list of this deck, if there is such a thing, could be twenty cards different than this one and I wouldn’t be too surprised; it has changed immensely from where I started. The original genesis for the list came as I was browsing Twitter and came across this list from Noah Koessel:

At the time I was looking for a deck that could use the combo pieces as effective cards by themselves, and making copies of Gearhulks seemed like as good an idea as any. As you can see, that plan didn’t really stay, but the deck had a lot of cool synergies and Improvise is a powerful mechanic that merited exploration. The primary issue the initial list had was a lack of early pressure.

Heart of Kiran was the key addition there, and it quickly became one of the best cards in the deck. Combined with your high-loyalty planeswalkers, it creates a ton of pressure and you can easily protect it with Metallic Rebuke or simply combo your opponent out if they tap out to answer it. The games where you start on a turn 2 Heart of Kiran are much different from (and much easier than) the games you don’t. 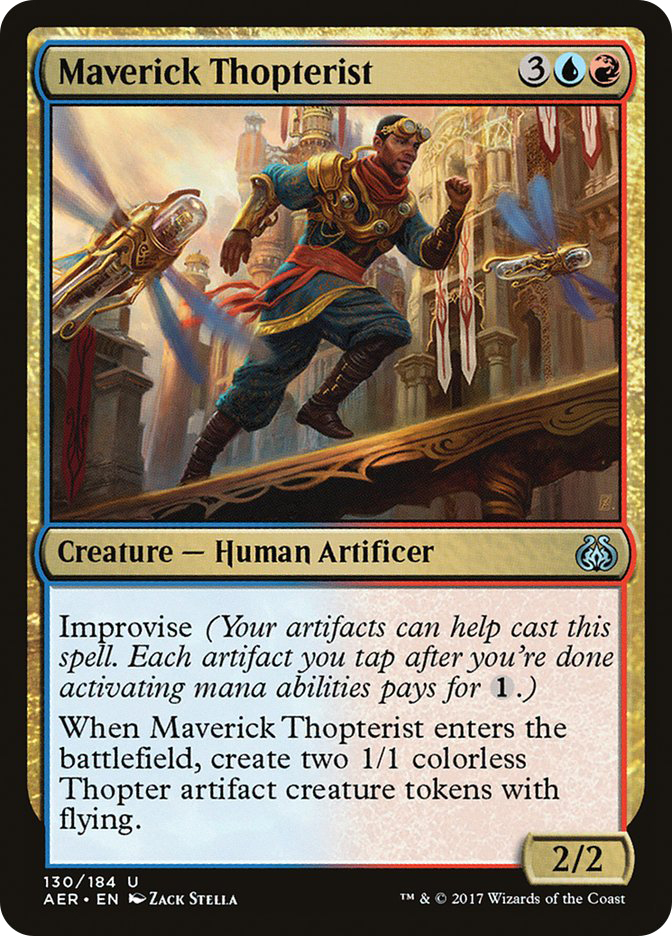 Maverick Thopterist helped the deck apply pressure, and doing so in a package that is hard to answer with traditional removal made it a welcome addition. But after playing with it, I found that the card did a lot of other little things that made it even better and made me chastise myself a little for not adding it earlier. It gives the deck another way to crew Heart of Kiran, it’s a great target for Felidar Guardian or Saheeli Rai’s -2, and the two artifacts it provides jump-start any other improvise cards you may have. Being able to land a threat with one mana open and immediately have Metallic Rebuke up creates some huge tempo swings that will end games when ahead and catch you up when behind.

The last really vital addition to the deck was Fatal Push. My early forays with the card showed that turning on Revolt reliably was more difficult than anticipated, so I was hesitant to include it, but this deck turns on Revolt better than any other in the format. The first time you tap out for a Tezzeret the Schemer to make an Etherium Cell and then Fatal Push your opponent’s attempted Felidar Guardian is simply sublime, and the threat of it lets you tap out more liberally against the combo than most midrange decks.

Having such a good one-mana removal spell is of course good against aggressive decks, but it’s especially important here since you spend a lot of your early turns setting up the Improvise engine with Renegade Maps and Prophetic Prisms. You’re going to fall behind against aggro decks in many games, but a well-placed Fatal Push or Metallic Rebuke lets you turn the corner quite easily. 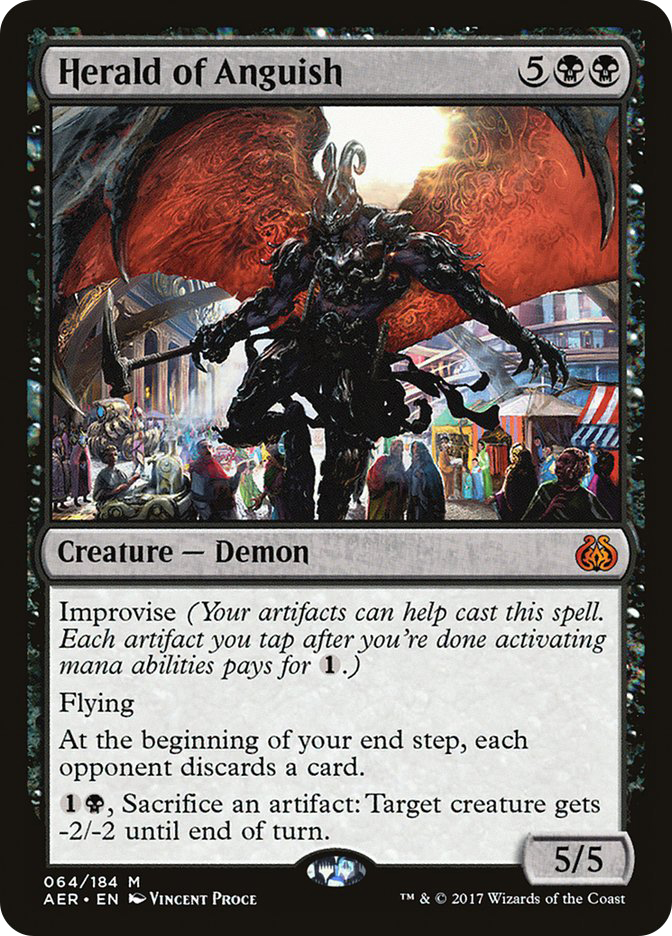 The card I’m most unsure of at this point is Herald of Anguish. Impressed by the other Improvise cards, I tested all of them that seemed of Constructed power level, and the giant Demon quickly impressed against green creature decks that mostly lacked a good answer to it. It pressured planeswalkers against G/W Tokens and answered hordes of little creatures, all while draining your opponent of resources. But in a format where Unlicensed Disintegration is everywhere, tapping out for a big creature is often a liability. I held onto this card for too long in testing and as a result didn’t have a suitable replacement in mind, but I’ll be looking for one moving forward. 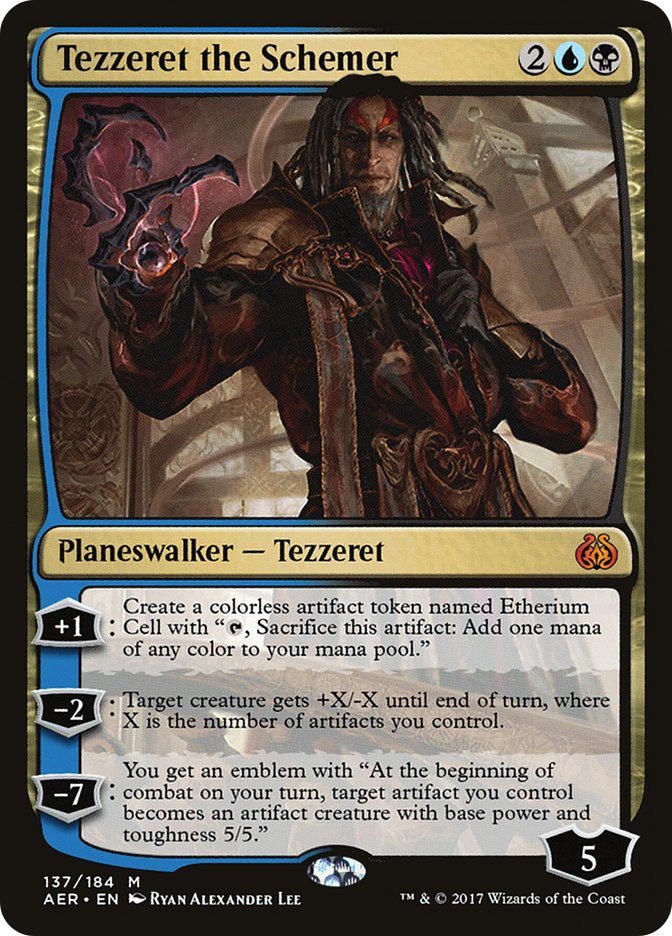 The deck still has issues against control, since Saheeli Rai and Tezzeret the Schemer aren’t good threats in the matchup outside of their ultimate abilities and Disallow often stops them, but if you can apply early pressure with Heart of Kiran or Maverick Thopterist, then you can play a solid aggro-control gameplan with your counterspells or cause them to take their shields down against the combo. Fortunately, I’m expecting control to be down in the coming weeks, which makes this deck much more attractive.

Outside of the control matchup, its primary weakness is the number of moving pieces in the deck. You need to draw the right mix of cheap artifacts, improvise cards, and significant threats and your margin for error is smaller than most decks. That is to say that the draws where things don’t come together well are pretty ugly. Missing your one-drop means that Maverick Thopterist can’t come down until turn 4, which means you have to spend your entire third turn holding up Metallic Rebuke instead of double-spelling on turn 4, etc. The awkwardness can quickly snowball out of control, but Fatal Push really does help fill in a lot of the gaps against aggressive decks, which makes me hopeful that this deck has a future.

And so, for the second year in a row, I find myself having started the season with two Pro Tour invites in the bag and then, halfway through the season, unqualified and scrambling to salvage another season of Silver.

Feeling like you’ve stagnated is of course frustrating, but it’s something all Magic players deal with, and it isn’t new in my Magic career. We like to think of progress as a slow but constant process where we improve a little bit every day, but that’s often not the case. In the beginning you’re seeing tons of new concepts in every game and quickly grasping universal concepts like tempo, card advantage, and the like, but after a while, your rate of progression naturally slows, since the hurdles you face grow ever steeper and you have to work ever harder for every gain.

But when the worst-case scenario is to spend your weekend exploring a European capital and walking through rooms like this: 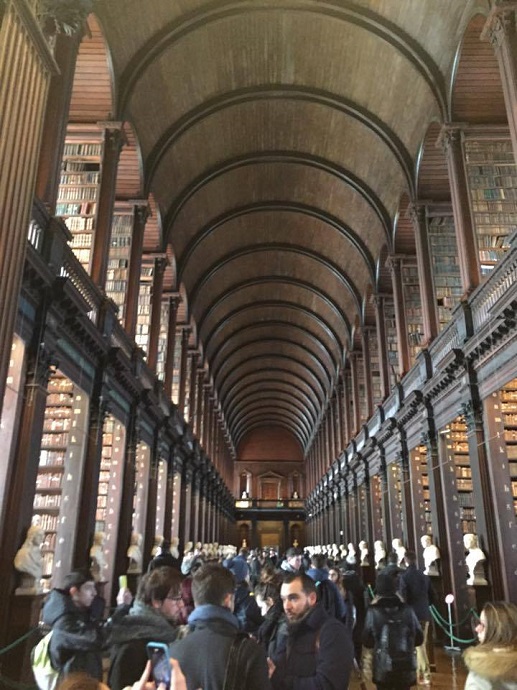