Today’s been a long week. Ikoria: Lair of Behemoths previews are underway, and this morning, Wizards of the Coast (WotC) gave us a taste of the mechanics and flavor of the plane.

Wait, Humans walling themselves up to hide from the giant behemoths of a hostile outside world? Where have I hard that one before?

“On that day, humanity received a grim reminder.”

All kidding aside, the return of Throne of Eldraine’s Humans versus non-Humans theme is still as refreshing as it was a few months ago. That’s to say that not treating Humans as the default creature type with a bunch of associated benefits via Thalia’s Lieutenant and friends is great.

One of the leading Humans on the plane, and a central character in the story, is Vivien Reid. As a result, she’s naturally getting the new card treatment:

There’s a lot to unpack with Vivien, Monsters’ Advocate.

First things first, without even acknowledging the text of her abilities, we can see that static abilities on planeswalkers aren’t a thing of the past. This is just something that’s going to keep happening on planeswalkers from time to time.

You may look at the top card of your library any time.

You may cast creature spells from the top of your library.

Once we actually take a look at the static effect, it’s the same ability as Vizier of the Menagerie. The first thought here is that Vizier didn’t see much play during its time in Standard, but it’s worth noting that it had to compete with the likes of Aetherworks Marvel and Felidar Guardian upon printing. 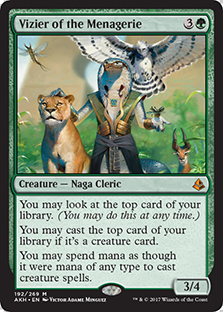 Another point to look at is that it’s one more mana to attach a planeswalker with two additional abilities onto the card. That’s more than a little value, and something that puts Vivien head-and-shoulders above Vizier.

[+1]: Create a 3/3 green Beast creature token. Put your choice of a vigilance counter, a reach counter, or a trample counter on it.

Her first loyalty ability is something similar to what we’ve seen on other successful green planeswalkers in Standard, which makes me optimistic for her viability. 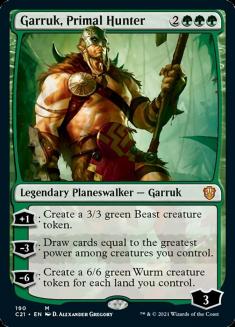 To anybody who’s played any Standard at all in the last year or so, seeing a +1 that generates three power and toughness isn’t exactly something that you’re going to have to be sold on. One of the nice things that Vivien has going for it is that she actually is generating a resource when she does it.

One of the biggest drawbacks that Nissa has is that she isn’t always the best card against cards like Shatter the Sky or Deafening Clarion. This is because what she does is simply upgrade resources into more proactive ones. Vivien, on the other hand, actually generates more resources that don’t come at the cost of anything else. This means she’s going to do a ton of heavy lifting against grindier decks that would otherwise be able to simply beat up on creature decks by casting a ton of removal.

Having the upside of a simple up-tick for her first loyalty ability is a big deal because she’s a planeswalker that more or less demands you untap with her in order to do anything – a tall order when she only starts at three loyalty.

[-2]: When you cast your next creature spell this turn, search your library for a creature card with lesser converted mana cost, put it onto the battlefield, then shuffle your library.

Her -2 ability, like her static effect, demands more mana be invested into her in order to see benefit from her effects. Her first effect allows you to spend more mana on creatures, and her last ability pays you for doing so. It’s a nice one-two punch, but what are the best ways that it can be applied?

In this take on Gruul Aggro, Vivien helps capitalize on mana. Gruul Aggro, throughout its time in Standard, has thrived on winning in the mid-game by outclassing what other players are doing in the first stages of each deck’s curve.

Vivien can exacerbate this by allowing it to be a five-drop that generates a 3/3, but then -2s in order to cast a Skarrgan Hellkite and a Questing Beast on the following turn. This is about as fair as the card can get, and it still is generating an impressive amount of proactive real estate for its mana cost.

What she’s also doing here is helping diversify the actual threats in the deck in order to get around sweeper effects. Something we’ve seen throughout Gruul’s history is stumbling a bit whenever a player has a sweeper on-curve. Vivien provides a ton of insulation against those effects on a similar spot on the curve. Paradise Druid cranking her out early makes it even easier to kick these decks’ teeth down their throat once they tap out for a sorcery-speed answer.

Here’s a deck that’s very interested in abusing how Vivien’s -2 interacts with creatures that have X in their casting cost. I know pairing big green mythics with Hydroid Krasis is a bit old hat by now, but come on. What else is there to do?

All kidding aside, the Simic deck is leaning into the synergistic bullet-esque cards that Vivien can help search for. It’s doing something similar to what we’ve seen from the Finale of Devastation builds of Simic Ramp, with fewer clunky cards filling out the list. It’s rare that Thassa, Deep-Dwelling is actually that incredible, but what if Vivien’s controller gets to automatically search for Thassa when they cast Agent of Treachery? It’s a whole different ballgame.

That isn’t even the most that the selection aspect of Vivien can be pushed.

For anyone who has been living under a rock for the last few months, these cards have been tearing up Standard since Throne of Eldraine hit shelves. One of the primary questions with the deck has been whether it should be a larger, grindier Jund deck or an aggressively slanted Rakdos deck.

There are upsides and downsides to both versions, with most of them being how aggressively costed the synergy pieces were or how resilient to disruption one wanted to be. Sure, Korvold may be more powerful than most of the cards in the Rakdos deck, but costing five is a real detriment for a deck that’s trying to close the game around then.

Playing Vivien allows the deck to dip its toes into a little bit of both. The above decklist is obviously incredibly raw, yet allows for a bunch of backdoor synergies off a Vivien minus. For example: 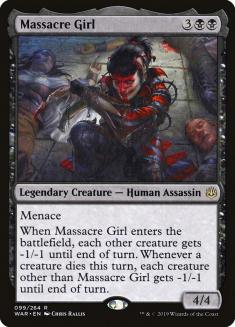 If you roll up Vivien for a 3/3, and then roll her down the following turn, subsequently casting Massacre Girl, you can get Woe Strider. This makes an 0/1, a 3/2, and a 3/3 – a perfect chain to wipe almost any battlefield out of nowhere. 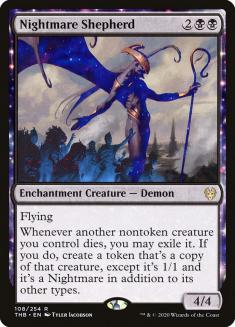 Cast a Korvold, get Nightmare Shepherd, immediately get a copy of any creature that you sacrifice.

Rankle into Woe Strider provides a bonus body to freely Edict both players with Rankle.

The list goes on and this deck is likely leaning too hard into the theme, but it’s a great place to start playtesting a card like Vivien for the sake of seeing how worthwhile it is to lean into the fact that she tutors for creatures.

The most necessary “sacrifice” to compensate for Vivien when deckbuilding is a need for a pile of creatures, which isn’t even a drawback most of the time. Consider a list like this:

This is the kind of deck that has a couple of cute inclusions but is mostly trying to abuse the fact that Vivien can live in a similar space as Experimental Frenzy. In a deck with enough cheap spells, she can be worth upwards of three or four cards a turn and then activate one of her loyalty abilities. 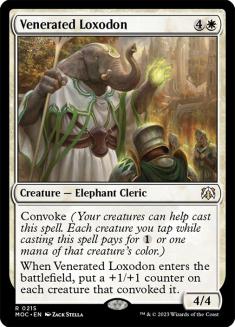 It’d also be remiss of me not to mention how favorably the convoke mechanic interacts with Vivien’s -2 ability. Oakhame Ranger is its own version of an Anthem that would come stapled to a Venerated Loxodon being cast, which fits this deck’s play patterns. Rather than trying to apply a bunch of consistent pressure, we can expect this deck to use things like Unbreakable Formation and Venerated Loxodon to build up huge one-shotting attacks after accruing some advantage with Vivien.

The biggest challenge Vivien faces in this Standard is that she’s competing with Nissa, Who Shakes the World. It’ll cause some amount of tension when choosing which planeswalker to include, but I’m confident that the two aren’t always going to fight for slots in the same decks.

Most of the decks in this article, for example, wouldn’t be interested in Nissa as a tool to try to translate to their late-game. Instead, Korvold, Questing Beast, and the like will put the nail in the coffin. Vivien is just making it easier to work around other pieces in the deck, providing additional layers of consistency and insulation from traditional means of interaction.

Either way, I’m confident that we’re going to see Vivien taking a bit of time off from her work on Ikoria to shine on the battlefield.