These are probably my three favorite words I can use when I’m starting an article. They signify so many things. I’ve learned something. I’ve gained a better understanding of a game I’ve played for 25 years. I’ve got something I’m excited to share with you. Magic has surprised me yet again, validating the massive amount of time I’ve invested in it.

If I weren't routinely getting things wrong about Magic, I would have lost interest a long time ago. And so, I’m happy to be able to report that I was way off base with my initial impressions of D&D: Adventures in the Forgotten Realms. I’m not claiming it's an all-timer or anything, but my last four days with the set has convinced me that it’ll be a positive addition to an extremely powerful Standard. I don’t know if any of these decks that I’ve been working on are about to crack the top tier and redefine the metagame, but they’re all competitive, and some are dramatic changes of pace from the way we’ve been playing the game for the last couple of years. Let’s look at some of the cards and strategies that have stood out to me thus far. 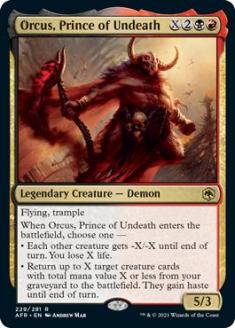 I believe Orcus, Prince of Undeath is the best card in Adventures in the Forgotten Realms, primarily for how it interacts with the best mechanic in the format, Adventure. The various flavors of Adventure decks all make their living by going wide and generating more value than non-Adventure decks could ever dream of. Orcus challenges all points of the Adventures gameplan.

It controls the small bodies like Edgewall Innkeeper or Toski, Bearer of Secrets that are generating the obscene amounts of card advantage. It can level the playing field after Adventures decks have successfully gone wide. It even can generate some of the same type of battlefield explosions that have been the sole domain of Adventures decks since they first arrived in Standard.

So what’s the best possible home to take advantage of all of these angles?