Over half of Ikoria: Lair of Behemoths has been previewed, and it looks . . . complex. There are two new mechanics, companion and mutate, and there are now keyword counters, allowing cards to grant keywords like flying and trample permanently. While both companion and keyword counters are interesting mechanics to introduce to Magic, neither of them will have a dramatic impact on Ikoria: Lair of Behemoths Limited. Companion is only on rares, and moving around keywords just adds texture and complexity, but doesn’t tell us anything about the format. Mutate and cycling, on the other hand, give quite a bit of vision into the expected Limited environment.

Cycling is one of the best mechanics for Limited of all time. Unlike in Constructed, Limited decks are not chock-full of powerful cards. And most of the powerful cards in a format will be fairly expensive. Cycling solves this problem singlehandedly. The risk of including too many expensive spells disappears and there are fewer non-games determined by mana flood or mana screw. 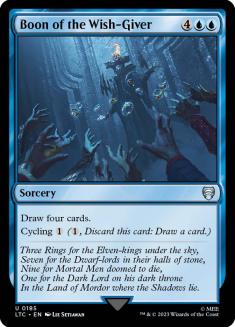 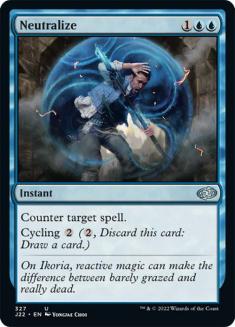 Cards with cycling often have specific windows where they are great. Cancel is historically a poor card in Limited because holding up three mana has a high opportunity cost, and when a player falls behind, countermagic doesn’t help them pull back. Yet Neutralize can always be cycled and this yields a card significantly more potent than Cancel.

Boon of the Wish-Giver is almost a bomb. Opportunity is a grossly powerful card in most Limited formats and cycling for just one colorless mana means it never rots in hand. In fact, cycling for just a colorless isn’t something we’ve seen before outside of Ash Barrens, and I expect it to have a large impact on the format. I will include Boon of the Wish-Giver in any deck, even nonblue decks, as long as they can get two blue sources in them. Splashing cards becomes much more palatable when they can be cycled outside of the splashed color commitment. 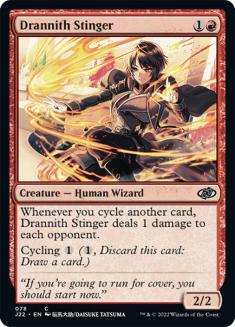 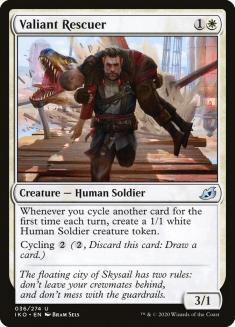 And even outside of the abundance of colorless cycling cards, there are plenty of cards that care about cycling. I’m unsure exactly which archetypes will end up focusing on the mechanic, but it looks like Boros will be one of them. Just like expensive creatures, cheap creatures greatly benefit from cycling. Early-curve plays get outclassed later in the game, which means that cycling mitigates the risk of running out of impactful spells.

But what does cycling mean for a Draft format? Cycling rewards longer games. This is because cycling not only increases the amount of decisions made in a game, it pushes some set of those decisions into drawing cards rather than committing to the battlefield. But just because cycling is in a set does not mean it will be a slow format. Amonkhet, for example, is a famously fast format with cycling.

The important notes related to cycling are twofold:

Both of these observations are related to the second mechanic, mutate, and I believe this mechanical marriage was purposeful.

Wow does mutate has a lot of reminder text.

What it boils down to is a super-fancy Aura that can only be attached to non-Humans. However, mutate doesn’t have all the downsides that Auras do. Most cards with mutate have a card-advantageous trigger whenever they mutate. Additionally, every card with mutate has the option to be cast as a normal creature. Both of those mitigation factors make up a mechanic that is quite powerful in Limited. Like cycling, mutate just provides more options. It will often be difficult to decide whether or not to mutate, similar to how it is difficult to decide whether or not to cycle. 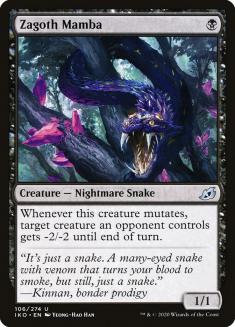 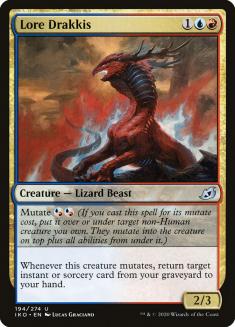 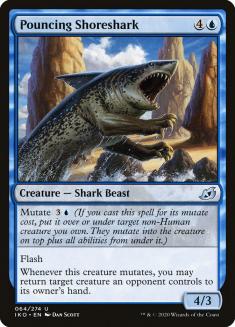 A key to understanding the impact mutate will have in Limited is the prevalence of the “whenever this creature mutates” clauses. Zagoth Mamba is about as powerful as a one-drop gets. And both Pouncing Shoreshark and Lore Drakkis have impressive mutate abilities. If mutating is often worth a full card of value, I expect it to have a profound effect on games. However, if all the mutate cards are that good, there won’t be a “mutate deck” because it will be difficult to get a density of cards with the mechanic. 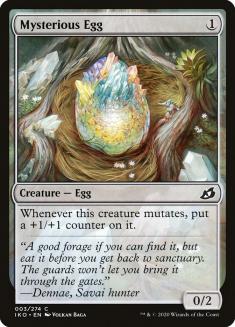 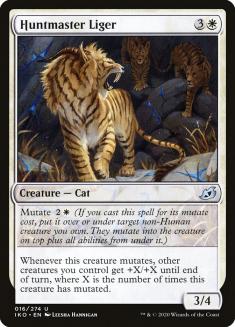 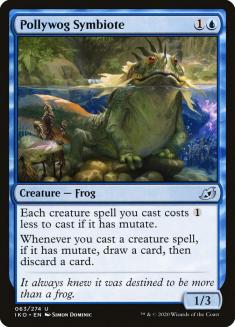 What I’m most curious about is the speed related to mutate. If every deck has desirable Aura-esque cards, this may push towards faster strategies. Mysterious Egg, Pollywog Symbiote, and Zagoth Mamba are cheap creatures that reward mutating early. If this is combined with large augmentations, games could end extremely quickly.

That will hopefully provide a nice tension with cycling, as that mechanic pushes towards slower strategies. Both mechanics increase decisions while having different types of benefits for decks slanted in both directions. And it makes me excited to see what the Ikoria: Lair of Behemoths Draft format is like.