Preview season is an exciting enough time, especially with two sets going simultaneously, that Cedric has asked me to hang up the Satchel for a week and dive on in with everyone else. Of course, this is a precarious position for me, since I help make the cards now. Thankfully, Ikoria: Lair of Behemoths was mega-locked by the time I started my contract, so I’m not revealing anything proprietary by selecting one of the many tournament-plausible cards that have been shown so far. That means a couple of things:

[A quick aside: it is a little weird to cycle for a colorless. Were I tasked with steel-man’ing that call, I would point to two things. One, having these cards show up a bit more might make Best of One (Bo1) on Magic Arena healthier, since it’s situationally very powerful but you can get away from it easily, much like Dissenter’s Deliverance. I would argue that Boon of the Wish-Giver is more of the type of thing I’d like to see compared to Dissenter’s Deliverance for Bo1, because “we are accruing advantages on different fronts” is generally more fun, dynamic, and replayable than “you’ve got an enchantment and I blow it up sometimes.”

Second, if part of the purpose of cheap cyclers is to help get people off the ground and play more “real games,” I’m not sure it’s correct to balance it around “you can’t cycle it sometimes if you’re playing two or more colors.” I definitely see the arguments in the other direction, but it doesn’t strike me as obviously reckless or nonsensical or whatever critiques have been offered up.]

I’m not prepared to make a deep dive on the mutate cards as a whole. Sea-Dasher Octopus is an easy call to make because it’s easy to conceptualize at “full retail” of being decent, and busted with Merfolk of the Pearl Trident or Kraken Hatchling. Many of the others are trickier and multicolored, more expensive, and more sensitive to the stuff they’re mutating, so they’re going to take a little while to flesh out, even if many appear at least reasonable even if the mutate was taken off.

If the mutate cards are a bit tough to analyze, the companions are a whole other thing, a blend of restrictions and incentives not before seen for competitive Magic. I would bet on at least one making an impact in each Constructed format. Analysis and iteration will take years, and will require updates with each new release.

However, if you’re in the market for some simple, no-context rate for Ikoria: Lair of Behemoths Standard (and maybe beyond), one card in particular stands out to me. That card is Chevill, Bane of Monsters.

Much has been made about Simic’s multi-format dominance over the last few years, but Golgari has not lagged far behind, partially due to how well it pairs with Simic, but also because it has the tools to play a robust, text box-agnostic game. From explore strategies of previous Standard formats, to Jund Sacrifice and Sultai decks of current Standard, to various Jund decks over Magic’s history, the core concept is the same – accrue extra cards, have enough catch-alls to cover all of your bases, and bury your opponent with your leftovers.

I think Chevill has the potential to fit into all such decks, and may have enough play for Pioneer and beyond, at least as a sideboard card. A 1/3 with deathtouch isn’t the most exciting body, but definitely worth a card against someone attacking on the ground. The real meat is that Chevill is so hostile towards opposing creatures, assuming that you’re playing with a reasonable density of removal.

If your opponent casts Chevill on the play and you’re without a removal spell, I’m not sure how reliably you can cast creatures, full stop. If you cast your two-drop and your opponent answers with a removal spell, they’re up a card and you are forced to answer the same question the following turn. If the opponent is broadly interested in attacking, a single successful trigger, netting three life and a card, should be enough to provide an advantage that will be very hard to overcome.

There are a few limitations here. Legendary, one power, and a text box that assumes the other player is engaging on the battlefield won’t do much against spell-based control and combo, and that might be enough to relegate Chevill to sideboard play. But it is very hard to fight the types of decks that Chevill will go into with a load of removal; too many sources of card advantage, other permanent types, and planeswalkers will make that too fraught. But if a creature-based strategy fails a removal test against Chevill, the game will be very hard to manage. It might be useful to think about Chevill as Olivia Voldaren, except two mana instead of four and just as durable. 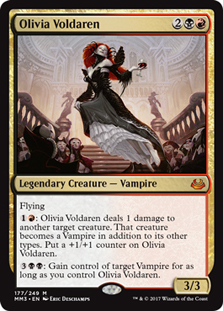 Chevill jumped out at me in part because the types of strategies I gravitate towards are just not beating this card, and I think a number of other decks, even those not as vulnerable to a 1/3 deathtouch creature at a baseline, will find Chevill something akin to a more anti-beatdown Tireless Tracker – high floor, high ceiling, and no “clean” way of mitigating it besides taking your lumps and hoping to avoid the avalanche. I would be shocked if Chevill wasn’t an important part of Standard over the next couple of years, and I’m bullish that he’ll find his way into Pioneer sideboards, at the minimum.

There’s lots of new design space in Ikoria: Lair of Behemoths that’s hard to analyze, but Chevill, Bane of Monsters is a useful reminder not to ignore the more innocuous-seeming cards, either.