When I was twelve and The Dark had recently come out, my best friend’s deck was based on legendary creatures, and saving his own creatures with Karakas was the only real payoff for playing a lot of legends (aside from the fact that we were kids and legends were awesome).

I’ve always had a soft spot for the various bones we’ve been thrown to try to create “legendary matters” tribal decks. Kamahl’s Druidic Vow never really made it, so I’m still waiting for something to make it happen.  It’s a tall order, because you want the deck to do something, but legendary creatures are often focused on doing their own thing, rather than being designed to work together.

Further, there aren’t that many and they’re evenly spread between colors and the Legend Rule means that you don’t want to play too many copies of most of them, which means you need to find even more unique cards that work together.  Can Kaldheim finally let us overcome those challenges and create a competitive legendary tribal deck? 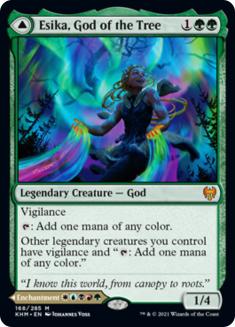 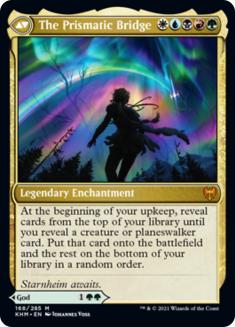 It’s hard to be optimistic after so many failed attempts, but the DFC Gods are a really big deal.  They smooth the curve by offering two different casting costs and mostly bypass the Legend Rule by offering two options so you can always cast a second copy.  We also have amazingly good mana in Standard for playing a lot of colors thanks to Fabled Passage, Triomes, and Pathways, and there are an impressive number of legendary creatures in Standard (thanks, presumably, to designing sets with Commander in mind).

Autumn Burchett has already written about a mono-green version inspired by Kolvori, God of Kinship, and they concluded by alluding to the idea that we might almost have enough support for a five-color version.  I’d like to continue where they left off and examine what such a thing might look like and why we might want to do it. 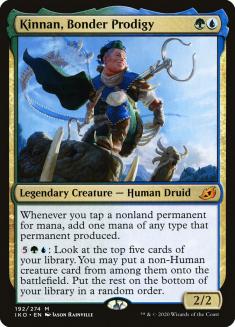 If we’re going to build around legendary creatures, we have to prioritize finding ways to make the cheapest legendary creatures work. Kinnan is one such option, and it combines with Esika to offer large amounts of mana rather than just a little boost.  It also offers a pretty powerful way to spend that mana.

Valki, God of Lies is another strong two-mana legendary creature that offers a great use for extra mana, in that Tibalt, Cosmic Impostor is an extremely strong planeswalker, especially if Esika lets you cast it significantly ahead of time. 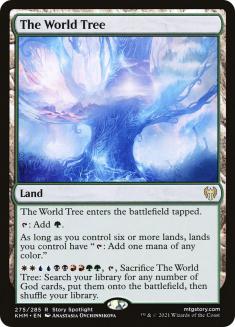 The World Tree helps guarantee that we’ll eventually be able to cast cards of any color, like a possibly loosely supported red splash for Tibalt, while also offering a pretty amazing way to spend large amounts of mana.

When building a tribal deck, I always start by looking at the best creatures of the appropriate type at each casting cost.  There are currently no legendary creatures that are legal in Standard that only cost one mana, which means we need to be sure to play plenty of twos. (If we get a one-mana legendary creature in Kaldheim, that might help, but it’s not too important in a deck that’ll definitely want to play some tapped lands).

I think the best two-mana legendary creatures we can play are Kinnan, Valki, and the back sides of Kolvori, God of Kinship (not technically a creature) and Alrund, God of the Cosmos.  Those creatures suggest that the mana will be easiest if I can prioritize Zagoth Triome as a starting point, which seems manageable.

I like the idea of attempting to use a companion, and as I see it, the reasonable options are Umori, the Collector; Keruga, the Macrosage; and Yorion, Sky Nomad.  Let’s see what those look like.

As you might expect, interaction is somewhat limited in the “everything is a legendary creature” deck, though Tibalt, Cosmic Impostor; Barrin, Tolarian Archmage; Polukranos, Unchained; and Kogla, the Titan Ape allow you to interact.  This deck is extremely straightforward, but as a proof of concept, it has good mana, a reasonable curve, and a good density of powerful cards with a lot of grinding potential.  I suspect the sideboard would involve removing Umori as a companion to get access to additional interactive spells of various sorts.

Jegantha, the Wellspring isn’t a very strong card, but it does make activating The World Tree relatively trivial, which is an interesting interaction to keep an eye on.  Attempting to use Jegantha as a companion in a deck that looks anything like this wouldn’t really work, since it’s incompatible with both Esika and Kolvori, as well as a number of other strong legendary creatures.

Without Valki there’s no compelling reason to play black, so this deck shifts its focus to red to support Bonecrusher Giant as an additional two-mana play that’s compatible with Keruga.

This deck makes good use of Thassa, Deep-Dwelling and Yorion, Sky Nomad both to turn the cheaper back sides of the DFC gods onto their front side and to combine with Llanowar Visionary, Barrin, Keruga, and Kogla.

I’m struck again by how great the mana is in this deck.  Triomes pair extremely well with Pathways to minimize the number of tapped lands you have to play while also mitigating the inflexibility of the Pathways thanks to the strength of the Triomes.

Access to every color allows me to play all my favorite Yorion targets, but I’m particularly excited about Path to the World Tree here.  Between blinking that and blinking Yasharn, Implacable Earth, this deck should have absolutely no trouble making all its land drops once it gets going, so I expect that spending seven mana to activate Path to the World Tree will actually be remarkably easy, and while a lot of what it does is fairly low-impact, the “draw two cards” part really matters to make sure you don’t run out of things to do. Esika is particularly strong here, as seven is right around the sweet spot for “amounts of mana that Esika should make it easy to hit.” 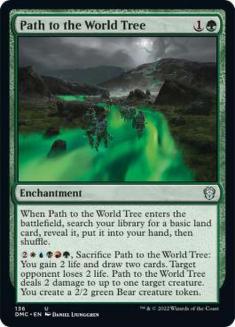 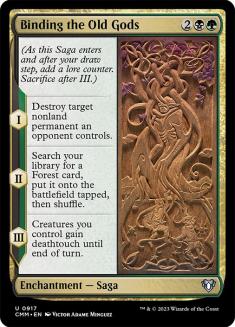 Binding the Old Gods is an impressive twist on Elspeth Conquers Death, and I’m not sure what the right mix of these cards is, or whether I should just be playing more of both of them.

Again, I’m really struck by just how good this deck is at grinding.  The combination of extra mana and extra cards is exactly what you need to go over the top of anything, and this deck is really overflowing with both

The mana here is really different from the mana in the other decks because the size of this deck offers enough room to play enough basic lands to take advantage of large numbers cards that search for basics — this deck uses Path to the World Tree, Yasharn, Binding the Old Gods, and Fabled Passage, but with twelve basic lands, I think I can pretty safely get away with that (though I do expect to run out of Forests and Plains occasionally).

It’s worth noting that mana like this is compatible with switching to Snow-Covered basics if there are snow-matters cards that a deck like this ends up wanting to play.

Of these decks, it should come as no surprise that I’m most excited about the Yorion version.  I think Umori and Keruga have much harder restrictions and that the creatures themselves are weaker than Yorion, so it was kind of bound to work out that way.  As it is, I think the Yorion deck benefits from having more cards, since I’m optimistic about the manabase that’s enabled by the larger deck here, and I feel like I’m already really pressed for space in the maindeck.  I’d be happy to play Glass Casket, and I’d love to have room for additional copies of all the expensive spells I’m playing.

This is a great example.  This card offers so much value upfront and it’s such a good card to blink with Yorion, but I struggled to find room for even a single copy.  I’d be happy to play more, but Yasharn, Acolyte of Affliction, and Binding the Old Gods are all similarly compelling.

At this point in Kaldheim preview season, it’s easy to get excited about all the cool decks the new set might enable before facing the reality of an established competitive format.  While the Gods-and-legendary-creatures part of this deck might not work out, I think Path to the World Tree as a foundation to five-color Yorion decks (which may focus more on controlling elements rather than overwhelming threat density) is a likely staple that I’m excited to explore in a variety of ways.

I also think that while The World Tree may ultimately function primarily to let Golos, Tireless Pilgrim activate in mono-color decks, I think it would be a mistake to discount its activated ability in Standard.  It’s not as strong as Field of the Dead, but it definitely serves a functional role as a source of inevitability; if you can’t kill me, I’ll eventually use an uncounterable ability to put a bunch of creatures onto the battlefield in your end step.  This might not matter in most matchups, but when you’re trying to get there, eleven really isn’t as much mana as it sounds like in long games.