Adventures in the Forgotten Realms may be the least-heralded Magic set in the game’s history. Most of that is due to unfortunate timing, with its release coming on the heels of one of the most anticipated sets in recent memory in Modern Horizons 2, so many players have had their focus on the Modern format, where new Standard-legal sets tend not to have much of an impact.

Compounding this is the fact that Standard continues to be dominated by Throne of Eldraine, with most players so sick of the overpowered cards in that set, despite several of the most egregious already being banned, that they’d rather wait out the summer and jump back into Standard once it rotates in the fall.

But these unfortunate circumstances are still masking the set’s low power level. It’s clear that recent sets have been powered down, and while breaking the trend of high-powered sets is a welcome change, it does create a stagnant metagame dominated by the older sets. I suspect we’ll see some impact on Standard before rotation, but considerably less than we would for an average set, and that’s a bummer.

So instead I’m focusing on Modern, where Adventures in the Forgotten Realms's impact was small, but significant. A handful of cards made their way into successful lists last weekend, affecting some of the more popular decks in the metagame. With so many powerful decks, Modern has always had a tenuous balance of power, so even a small shift can create major ripple effects. But you have to be careful when evaluating Week 1 results, since players are eager to try out new cards, and after more testing they often turn out to be weaker than the previous options.

With that in mind, I’ll be looking at three cards: Tasha’s Hideous Laughter, Ingenious Smith, and Portable Hole, that made their way into the Top 8 of a Modern Challenge on MTGO last weekend, and offer my thoughts as to whether I would buy or sell on the card making a lasting impact in its archetype. And without further ado, let’s get to the cards. 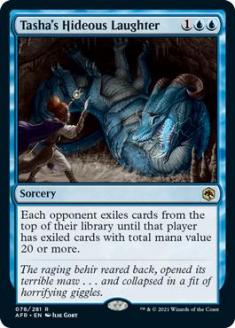 Oddly enough, I first recognized the power of Tasha’s Hideous Laughter in Standard during an episode of VS Live! that was very early on in preview season. There weren’t many cards and I decided to build a Dimir Mill deck that I didn’t expect to perform well. But when I won the first game on Turn 5 while having some disruption, I knew Tasha’s Hideous Laughter had some legs. Enough that I was curious as to its potential in Modern.

Dimir Mill had been elevated from fringe archetype to solidly Tier 2 even before Adventures in the Forgotten Realms, operating in a similar space to Dredge where it would pop up for a week or two and then recede when the sideboard hate turned up. But any time you’re forcing opponents to put Gaea’s Blessing or Kozilek, Butcher of Truth in their sideboards, you know you’re doing something right.

With the addition of Tasha’s Hideous Laughter, Dimir Mill may have taken the next leap from gutsy metagame call to consistent viability. All three Dimir Mill decks that were in the Top 32s of last weekend’s Challenges played the full four copies, a strong initial endorsement, and it’s easy to see why if you take a minute and crunch the numbers.