As you probably already know if you’ve been following my content for a while, I’m a huge fan of flexibility. I believe that being useful in two completely different situations is one of the most powerful characteristics a card can have, and as such it’s no surprise that I have high hopes for my preview card, Boon of the Wish-Giver.

There are many different ways of analyzing a card like Boon of the Wish-Giver. One could, for example, compare it to Hieroglyphic Illumination: 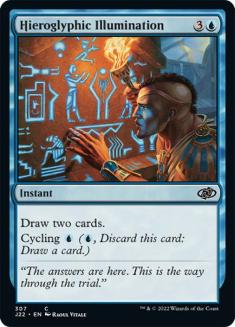 Or, my preferred way, we could look at it as an Opt / Tidings split card: 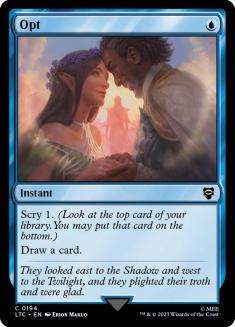 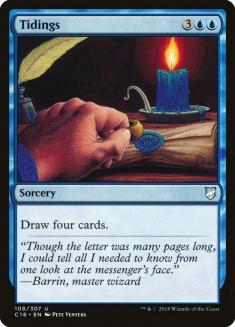 Opt is and has been a Constructed staple for some time now. Boon of the Wish-Giver is a worse one-mana card than Opt, but it’s not strictly worse – there are a couple of advantages here that could be relevant.

First of all, Boon of the Wish-Giver is colorless to cycle. This is actually a big thing, and could be the difference between keeping or having to mulligan an opening hand. Opt is the kind of card that can actually warp manabases to support it, and with Boon of the Wish-Giver you don’t have to worry about that – it’s very easy to cycle on Turn 1 regardless of what else you have, and very easy to slot it somewhere else in the curve. Imagine, for example, an opening hand of Temple of Abandon and Opt in Temur Reclamation – you might keep it, you might not, but it’s certainly riskier than a hand of Temple of Abandon and Boon of the Wish-Giver. You could even potentially play the card in a nonblue deck if you need a card in your graveyard (for example a sorcery for delirium), which is pretty unusual.

Second, it can turn on potential cycling synergies. Right now there isn’t any deck that is interested in that, but it’s possible that cycling comes back in full force with Ikoria: Lair of Behemoths, and then it could matter. I was a fan of the Drake Haven deck back in Amonkhet, and if something similar exists in the new Standard, Boon of the Wish-Giver will slot right in, whereas Opt wouldn’t. In fact, Boon of the Wish-Giver is the easiest card to cycle that we’ve ever had in the game outside of cards with alternate costs such as Street Wraith and Edge of Autumn.

Third, you’re not casting a spell, which can sometimes be an advantage. Boon of the Wish-Giver cannot be countered if you cycle it, for example – people usually don’t counter Opt anyway, but they could, and with this card they can’t. It also bypasses certain permanent-based restrictions such as those on Thalia, Guardian of Thraben; Eidolon of the Great Revel; Damping Sphere; Chalice of the Void; and Teferi, Time Raveler. If your opponent has both Teferi, Time Raveler and Narset, Parter of Veils on the battlefield, then that locks your Opt out of ever drawing a card, but you can bypass both planeswalkers by cycling the Boon on their turn. You can also cycle Boon of the Wish-Giver if you’re under Fires of Invention, whereas Opt costs you a spell. The downside is that this won’t trigger certain positive effects that happen on cast, such as Arclight Phoenix.

But all in all, I’m going to agree that, as a whole, Boon of the Wish-Giver is going to be a worse card to “cast” for one mana than Opt. What you’re getting in return, then, is the ability to cast Tidings later in the game for one extra mana. How relevant is that?

I think it’s quite relevant – drawing four cards is potentially a game-winning effect. It’s easy to envision scenarios where you just cast reactive cards early in the game and then, once you hit six mana, you cast Boon of the Wish-Giver and refuel completely, and that closes out the game. Or scenarios in which they cast a couple of Thought Erasures and empty your hand, and then you draw Boon and undo all their work – in spots like these, it’s several times more powerful than Opt. 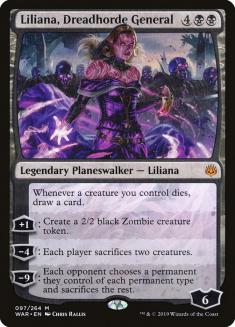 In most of these situations, having a big creature such as Dream Trawler or a planeswalker like Liliana, Dreadhorde General would be better, but you must consider that playing these cards has a cost – they’re expensive and sometimes the game effectively ends without you ever casting them. There’s a reason we only played one Dream Trawler in our Azorius deck at World Championship XXVI, and it wasn’t because it wasn’t good; it was just because we didn’t feel we could afford having another dead card early on. With Boon of the Wish-Giver, you’re not paying that price. If you draw two of them in your opening hand, or if you’re stuck on four or five lands, you can simply cycle one or both away. You could in theory play four copies of the card without ever really worrying about it clogging your hand, and in fact you could play four copies of it alongside other six-drops if you wanted. This gives you a very powerful late-game without compromising your early-game as much as any other late-game card.

Boon of the Wish-Giver is not the kind of card that spawns entirely new archetypes by itself, so I’m not going to have a super-innovative list for you, but I think any slow blue deck could potentially be interested in it – the more cheap, reactive cards, the better. Historically speaking, sorcery-speed card drawing spells like Tidings have seen play in tap-out decks, but in the case of Boon of the Wish-Giver, I think it could actually see play alongside counterspells – first because you can cycle it as instant speed if you’re in this type of game, and second because nowadays most counterspell decks run Teferi, Time Raveler and Boon is a very good card to use on their turn.

Take, for example, a deck like traditional Temur Reclamation. Temur Reclamation currently plays Opt. Could it replace some or all of its Opts with Boon of the Wish-Giver? Could it potentially add Boon on top of the Opts it’s playing? I think so. Being a sorcery means you can’t use Wilderness Reclamation to cast it with less than six mana, but it can still work with Reclamation because you cast it and draw four cards, and then can untap your lands and cast any instants you drew. Temur Reclamation is already incentivized to fill its graveyard because of Uro, Titan of Nature’s Wrath, and playing some Boons alongside Opts is a way to accomplish that early in the game while not giving up a lot of power in the late-game.

In this list, there are four Opts and two Boons, but it’s definitely possible these numbers could be swapped or even increased to four copies of each in the future, depending how things shape up.

Other decks that might potentially be interested in a card like this are Azorius Control, Sultai Control, Bant Midrange and any sort of Grixis or Dimir control deck that ends up appearing with the new set. You could also play it in, say, Temur Adventures – early on it can help you find your Lucky Clover or Edgewall Innkeeper, and later on it can act as an additional Escape to the Wilds. It’s also possible it slots right into a Fires of Invention build, since it has potential applications in all stages of the game – early on you can cycle it to help you find lands or Fires of Invention, in the mid-game you can cycle it without it using up a spell slot, and then in the late-game you can just cast it to draw four cards for free.

As with most flexible cards, Boon of the Wish-Giver will not be the easiest card to play with. I think that, with this card specifically, it’s important to not be greedy, especially if you play multiple copies. The more of this card you have in your deck, the more inclined you should be to cycle away early copies. I suspect that, most of the time, you’re going to be cycling away Boon of the Wish-Giver at your first opportunity if you have it in your opening hand. Exceptions to that are when you already have your plays scripted out (so you don’t need to find anything else) or when you have reason to believe your opponent is not going to pressure you, so you’ll get to six mana comfortably. Then, if you draw it later on, you reassess the situation.

Overall, I’m excited for Boon of the Wish-Giver. It’s hard to say which decks exactly will want it and which decks won’t, but my inclination would be to at least test a couple of copies in all my slow blue decks – I think the flexibility of a passable early-game cantrip combined with a powerful late-game draw spell has a lot of potential, and some deck is going to want it.

Past that, I’m hoping we get some more cycling synergies in Ikoria: Lair of Behemoths, and if we do, then Boon of the Wish-Giver will definitely see play.