The results are in and Azorius Control is the top option in Theros Beyond Death Standard. The online metagame gave us a sneak peek at what this archetype was capable of and it delivered at SCG Richmond last weekend. I of course have my control bias, but the results are hard to refute from any conscientious observer. Not only was Azorius Control the Standard seat on the winning team in Richmond, but it also took down the Standard Classic there as well.

This article will focus on the build Corey and I developed. Zach Allen masterfully maneuvered through his tournament to hoist the trophy; however, his build is close to the stock version that was popular on Magic Arena. The list that was produced by Team BCW had pivoted to the next level, utilizing the most powerful new tools from Theros Beyond Death and the previous control staples at a higher density. 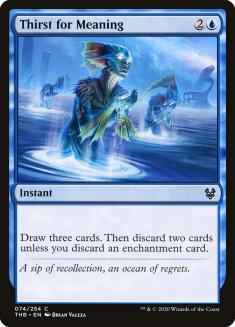 Zach’s list, like many online, looked to find powerful interaction through traditional card draw. It brings me joy that he came to a similar conclusion that we did and quickly abandoned Thirst for Meaning as the card advantage vessel. There aren’t enough disposable enchantments to make this card a reliable source for bonus cards. It incentivizes playing removal with attached liability such as Banishing Light and that is not where Azorius Control should be rooted in the current Standard. There are also very few scenarios where you actively want to pitch the best enchantment we have seen in years, Elspeth Conquers Death, to avoid dropping two cards. He decided to use a couple of Narset, Parter of Veils and Chemister’s Insight to draw a few extra cards.

This was the polished list I piloted to an 11-2 record in the Team Constructed Open last weekend. Although our team fell short, I felt unstoppable during both days of competition. I had a quick loss to Will Pulliam due to my inexperience playing against Temur Reclamation and his tight play but I quickly rebounded against my next Temur Reclamation player, using the valuable lessons from the match prior. My other loss was to Mono-Red Aggro; however, I had an overall record of 3-1 against the archetype. Those two matchups are the toughest you’ll run into, which is a very good sign for control moving forward. If there are only two decks that challenge the might of Azorius Control, then we need a few tweaks around the edges to tackle that challenge, while keeping the other decks at bay. Easy enough.

Beating Combo and the Mirror

The list you see above has a few non-negotiables that must be kept in their entirety. Cards like Glass Casket, Brazen Borrower, Elite Guardmage, and Omen of the Sea can have the numbers shifted or get cut entirely. These are the flex slots of Azorius Control and can help reduce the difficulty of some matchups, while increasing it for others. After weeks of testing on Magic Arena, discussing options with Team BCW, and then dominating live play, I have a good idea of what cards can move the needle to gain percentage points in the metagame.

Beating Temur Reclamation is a must and the deck’s popularity will only grow. This is easily the toughest matchup, with Game 1 being the most difficult spot for the Azorius Control pilot. The silver lining is that any changes to boost this matchup will help against the mirror, as the threats are rooted in noncreatures. I ended up splitting against Temur Reclamation at 1-1, but Corey stumbled with a 2-3 record against it, finishing 12-4 overall. That is still a very respectable record; however, it shows a weakness that can be exploited. The fix is not too difficult.

Dovin’s Veto is required in the maindeck of Azorius Control to help defend against the upcoming increase of both control and combo in Standard. The Elite Guardmage was a nice cantrip that fed me land and life, but it needs to go for Dovin’s Veto to save the day. This cut, along with a Brazen Borrower, will finalize the new maindeck for Azorius Control. 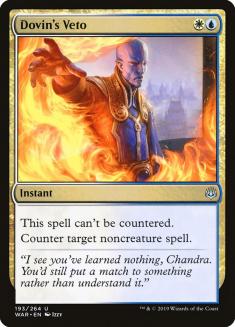 With Dovin’s Veto now in the maindeck, Temur Reclamation will not get that easy win that it has enjoyed Game 1. An uncounterable Negate is one of the toughest cards for them to deal with, especially when they fully rely on Expansion // Explosion to solely carry them to victory. Azorius Control can’t rely just on a couple of new counterspells, but add in eight of the most devastating planeswalkers to their strategy, and panic mode sets in.

The way to defeat this deck is patience and that is what I lacked in my first match against it. Resolving one of the three-mana planeswalkers early is a start and usually makes it tough for their deck to operate. Aggressively mulliganing away Shatter the Sky and Time Wipe is a must due to their lack of use in the matchup. Glass Casket was a decent card to keep in all three games, as it hits every creature that Temur Reclamation produces. It isn’t intuitive to keep in the clunky removal spell, but it is the cheapest and cleanest answer we have access to by a mile.

The main way to lose this match is to get forced to fight over their Brazen Borrower late, requiring too much mana being taxed and allowing them to produce a Wilderness Reclamation. Azorius Control doesn’t have a great deal of instant-speed answers to creatures, which makes this line of loss frustrating. Avoiding it with a timely Glass Casket will produce wins, especially with the new support from Dovin’s Veto for the big stuff.

The control mirror is won by implementing the same strategy used against Temur Reclamation. The early planeswalkers are the most important, followed by Elspeth Conquers Death to answer theirs. Building up resources, while denying the opponent, is the tried and true strategy in the control mirror. Even though I take great pride in my mirror match capabilities, this version of Azorius Control comes equipped to bash it into the ground with minimal effort.

While other control fans are still trying to play a bunch of mediocre card draw to make up for lower threat density, we will be on the optimal layout. Having all these threats and six counterspells will lead to a natural advantage Game 1. The sideboard doesn’t make it easier for our control opponent, providing us with an additional five counterspells and a fourth Elspeth Conquers Death. This setup sounds like I have it out for my control brothers and sisters, but the reality is that these threats are good against nearly every deck out there.

I toss Simic Ramp into the combo/control category because the strategy to defeat it follows the same model as described above. Counterspells are great against Simic Ramp and prevent it from getting its devastating team captain, Nissa, Who Shakes the World, onto the battlefield. The only spells that can maneuver around counterspells eventually are Hydroid Krasis and Uro, Titan of Nature’s Wrath. Unfortunately for Simic fans, both of those spells get mightily embarrassed by the four copies of Narset, Parter of Veils and the set of Elspeth Conquers Death to bring them back. This matchup can be tough without the maximum amount of Narsets but luckily that doesn’t apply to us.

The sideboard has only two changes and the first is adding a second Aether Gust over the Sorcerous Spyglass. The Sorcerous Spyglass was a hedge against Jund Sacrifice and Heliod’s Intervention carried that burden well enough. The other change is removing one Dovin’s Veto for a Glass Casket. I play a dangerous game with only a couple of copies of Glass Casket maindeck, but the five sweepers usually come through in the clutch. It wouldn’t hurt to have seven, two-mana removal spells to help combat the black and red aggressive decks out there. Although these sideboard changes do not impact the control and combo matchups, the maindeck inclusion of Dovin’s Veto will.

The most popular aggro decks in Standard are primarily black or red. This streamline in aggression makes it easy to prepare for, as Devout Decree becomes an automatic four-of in the sideboard. The sideboard for Azorius Control has limited flexibility and there aren’t many viable options to tackle the best decks out there. Therefore I often find it confusing when I see players use a couple of copies of this hate card and a couple of copies of another, when there is clearly a best option that needs to be maxed out. The correct amount of Devout Decree is four for Azorius Control and it will save your life against the most played aggro decks. 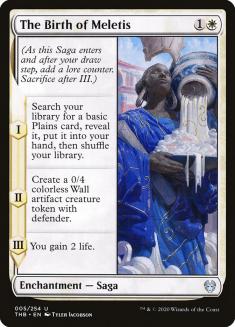 Sideboarded games are important; however, I enjoy having a Game 1 that isn’t hopeless. Beating aggro Game 1 is much easier than I anticipated, relying on the power of The Birth of Meletis. I could not believe how absurd this card would end up being during preview season. I wrote about how it would be an easy inclusion into a two-color control deck, but I did not think it would provide this much of an edge against all aggro decks. Mono-Red Aggro, Rakdos Aggro, Mono-Black Devotion, and Gruul Aggro all bend the knee to the land drop, the 0/4 Wall, and the two life it produces.

This new Wall of Omens is the primary support in the war against aggression, but it is not alone. Just as Wall of Omens did before The Birth of Meletis, it provides the control user precious time while building toward a powerful four-mana sweeper. That four-mana sweeper returns to us as Shatter the Sky, which initially hurt my feelings when released. I still think that Day of Judgment needs to return to circulation, but this is a wonderful placeholder until then. With the delay power of The Birth of Meletis and Brazen Borrower, Shatter the Sky is all that is needed to have a strong Game 1 against the aggro decks in Standard. 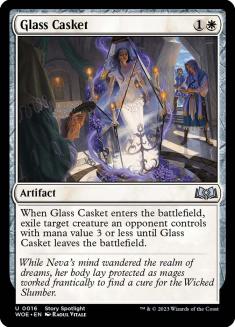 The tricky part is the amount of Glass Casket that you want to play in the maindeck to guarantee time to hit a sweeper. It is rare for me to lose a game where I have a Turn 2 Glass Casket or The Birth of Meletis, followed by a planeswalker to absorb a hit, then devastate them with a Shatter the Sky. Guaranteeing that two-mana spell is a gamble with only eight in the deck. We are still ahead of the game in comparison to other Azorius Control players that skimp even further on two-mana creature disruption, but we could always play more. So far, that number has worked for me and can increase if Temur Reclamation and Azorius Control aren’t too popular in your targeted metagame.

A big reason why Azorius Control is the best deck in the format is its matchup strategy overlap. Just like the Temur Reclamation and control mirror, the strategy behind midrange and aggro is similar. Sweepers are very good against both, which has not always been the case. Mono-Red Aggro decks of the past contained minimal creatures and a bunch of burn. Aggro decks in this format all use a bunch of creatures, just like their midrange counterparts. Jund Sacrifice, Gruul Aggro, Rakdos Knights, and Mono-Red Aggro get hit hard by a Time Wipe or Shatter the Sky. When the control spells have reach across a multitude of matchups, the world better watch out. The king of Azorius Control also happens to be good against every single deck in the format.

Lastly, there’s Dream Trawler – the best win condition that control has had in many years. I hear comparisons to Torrential Gearhulk; Teferi, Hero of Dominaria; and Elspeth, Sun’s Champion. That is some esteemed company; however, Dream Trawler is better than all of them in their respective Standard. The amount of pressure that one Dream Trawler can race, its immunity to virtually all removal, and the card advantage it produces make it a one-of-a-kind creation that will haunt enemies of control for a very long time.