Are you having fun with any of the new Elder Dinosaurs from Rivals of Ixalan yet? I really love that they made an entire five-color cycle of them, and how cool the ones outside of the Naya color shard where all the other Dinosaurs live are. If you haven’t been reading along, I wrote about Ghalta, Primal Hunger here; Zetalpa, Primal Dawn here; and Tetzimoc, Primal Death here. Last week I dipped outside of the five-card cycle and wrote about Zacama, Primal Calamity, but this week I’m back in the cycle, and this time I’m zeroing in on blue. Dinosaurs are scary, but there’s something about a giant carnivorous lizard that swims underwater that’s downright terrifying. Let’s build a deck worthy of the fear! 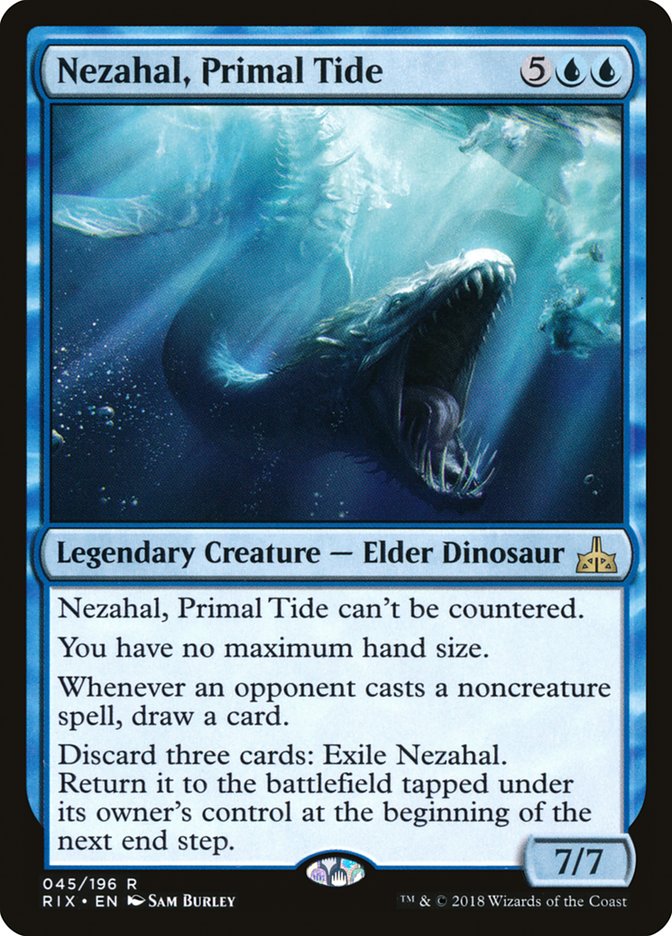 Just look at that majestic monster! That creature means business. First of all, it can’t be countered, so you can be sure it’s hitting the battlefield once you’ve got the mana available. And once it’s out there, it’s got a pretty sweet way to dodge removal so long as you have plenty of cards in your hand…and we’re playing blue, so there are lots of blue cards that can ensure it. But Nezahal even helps out with that, letting you draw a card each time your opponent casts a noncreature spell. So if you’ve only got two cards in hand and your opponent casts a noncreature spell to try to kill Nezahal, boom, you’ve got your third card to discard!

Another wrinkle to this ability to dodge removal is that it’s a discard outlet, and there are certainly plenty of cards that you don’t mind discarding or that provide benefits when a card is discarded. Let’s dig into that a bit.

When I think of cards I don’t mind discarding, I think of the madness mechanic. The good madness cards available in a mono-blue deck are limited, but I did find a couple, like Obsessive Search and Welcome to the Fold. Wonder also doesn’t mind getting tossed into the graveyard. What’s scarier than a giant carnivorous lizard that swims underwater? One that also flies, of course!

Amonkhet and Hour of Devastation provided us with some “discarding matters” cards to tie into the returning cycling mechanic. The most exciting of these was Drake Haven, but Curator of Mysteries is another good one. While it’s nice to have discarding payoff cards to add value to Nezahal’s ability, a significant portion of the game is going to go by before you get a chance to cast your seven-mana commander, so I’ve also included some other discard outlets, such as Geier Reach Sanitarium, Jace’s Archivist, and Prognostic Sphinx.

I like the idea of holding Memory Jar as an emergency escape hatch, just sitting there ready to refuel your hand with up to two exile activations.

We’re mono-blue, so counterspells are probably a given. There are going to be times when someone at the table casts a spell that’s going to end the game, and only someone with a counterspell can be the hero to stop it. I like to be stingy with my counterspells for just those sorts of occasions because otherwise you’re really killing some of the fun of Commander. An exception could be made if someone casts a spell that costs a lot of mana and you’ve got a Spell Swindle in hand: lots of Treasure is lots of Treasure, right?

Commit is a great inclusion here, and not only as a way to temporarily counter the uncounterable. The Memory side gives you a way to refuel your hand for more discarding.

If I’m playing blue, I’m playing Pongify and Rapid Hybridization. Too many people skimp on pinpoint removal spells in Commander, but I feel it’s always important to have a cheap way to point at one problem creature and get them gone. The 3/3 body they leave behind is going to be relatively inconsequential in a game of Commander.

Cyclonic Rift is Cyclonic Rift. Everyone is going to hate you, but you’re blue, so what do you expect? But hang on, let’s go a step further. Nezahal’s ability exiles it temporarily, so that means you’ve got a built-in loophole to get around spells that bounce all creatures or permanents. Like Crush of Tentacles.

I would rarely, rarely ever advocate casting a card like Sunder in Commander, but if you could bounce all creatures at instant speed with Evacuation, pitch some cards to dodge it with Nezahal, and follow it up with a Sunder, that would leave you with a 7/7 creature that could kill someone with Commander damage in three hits. Rather than setting the game back to zero, you’ve cleared the path for imminent victory.

Okay, if we’re going to want to have extra cards to discard, we’re going to need lots of extra cards, and blue has no shortage of ways to draw cards. I’m biased a smidge towards cards like Dictate of Kruphix; Mikokoro, Center of the Sea; and Temple Bell, since giving my opponents more cards means they cast more noncreature spells, which means I get to draw more cards from Nezahal’s triggered ability. I went ahead and made room for the raw card drawing power of Pull from Tomorrow, Blue Sun’s Zenith, and Stroke of Genius. And since we’re drawing all these cards, I’ve included some other cards that like all the cards drawn: Empyrial Plate, Sphinx’s Tutelage, and Chasm Skulker. I’m also hoping that Kefnet the Mindful will be able to attack and block most of the time.

Arcanis the Omnipotent is particularly sweet, since each activation provides fuel for protecting Nezahal. Kozilek, Butcher of Truth is technically card drawing, but most of the time I imagine it’ll be used as a way to shuffle your graveyard back into your library so you don’t accidentally deck yourself.

Like many of the other Elder Dinosaurs, Nezahal isn’t super-cheap mana-wise, so we want to have plenty of ramp. Ixalan block’s transforming cards are a boon to all nongreen Commander decks that are interested in ramping, so we’ll again make use of many of them here along with the usual suspects like Sol Ring, Worn Powerstone and Caged Sun. Mage-Ring Network is a great card in a blue deck, since it lets you bluff a counterspell and not have to waste your open mana, since you can just charge up instead.

What do you think? How would you go about building this deck differently? Do you think the big blue Dinosaur has legs?

Speaking of mono-blue decks all about drawing cards, be sure to read Mark Nestico’s column last week where he talks about his Kami of the Crescent Moon deck. And for more Commander content, make sure to check out Sheldon Menery’s great strategy article Adventures in Deckbuilding, where he pulls back the curtain on how he goes about building his Commander decks. It’s a great read!

Last but not least… did you hear about the Commander Celebration going on at SCG CON June 8th – 10th? I’ll be there, along with Sheldon and the Commander VS. crew Jonathan, Stephen, Justin, and Jeremy. If you’re within driving distance of Roanoke, Virginia, come down for a fantastic fun weekend and play Commander with us! I am super-stoked and hope to see a lot of you there!