When I started writing this week’s column my intention was building a black
deck around Whisper, Blood Liturgist from Dominaria. That card is
a sweet build-around commander! It’s a nice callback to the venerable
Hell’s Caretaker, a card that I loved from the moment it was printed but
realized long ago that the card was just terrible. Despite the cool factor.
Whisper as your commander means you have it to cast whenever you have the mana, and once summoning sickness is gone you can activate it at instant
speed, which is huge! Sure, it costs two creatures to sacrifice to bring
something back from the graveyard, but there are tons of great sacrifice
fodder available in the Commander card pool. There are some great giant
creatures you can discard into the graveyard and reanimate with Whisper at
instant speed, and I was having a great time researching and sketching out
my deck list.

But then… but then this card was previewed, and my previous plans just
didn’t matter anymore. 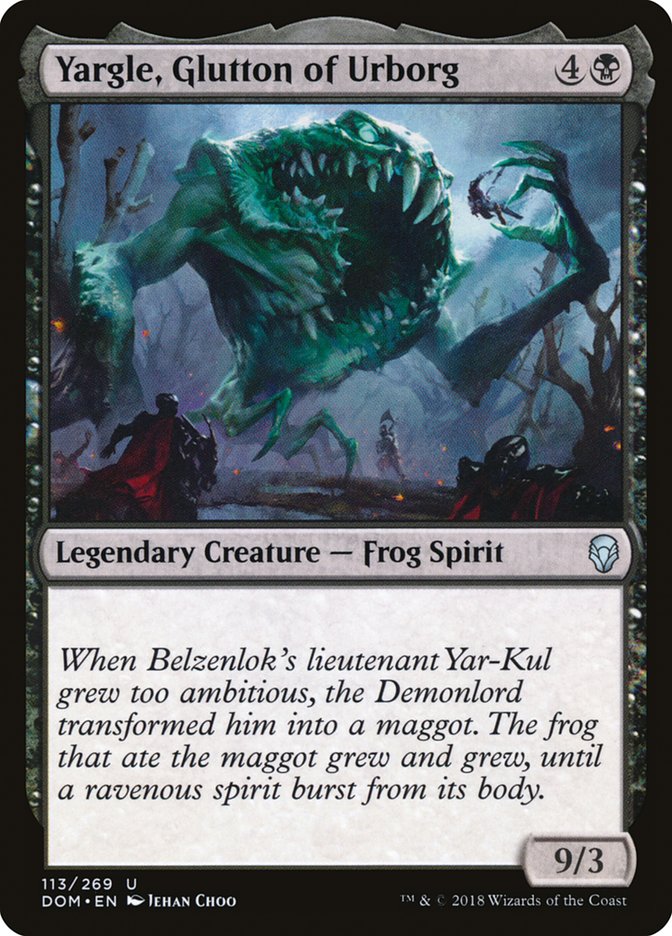 This card just made me laugh and laugh, literally out loud. Traditionally,
I’m drawn to Commanders due to their special abilities, and love building
sweet synergies that nuzzle up to my legend’s text box. The wonderful joke
here is that Yargle doesn’t have a text box. It’s a legendary vanilla
creature. It has no special abilities, outside of a 9/3 Frog Spirit with
some funny flavor text.

Yargle is the kind of card that you slow roll reveal once everyone else has
shown their commanders, and you just casually slide Yargle, Glutton of
Urborg out there for everyone to see. They’ll justifiably laugh, and you’ll
laugh right along with them. And you’ll laugh even harder when you kill
them with it.

Yargle is awesome. I just had to build a deck around Yargle.

The first order of business was to sprinkle in some flavor text flavor. We
of course needed Demonlord Belzenlok, who’s a high-quality card on its own.
It’s big, it’s bad, it’s got an attitude. If your opponent wastes a removal
spell on Yargle, they may regret their decision when the Elder Demon comes
calling.

To round out the flavor we needed a frog and a maggot. The choices in
mono-black are a bit thin, but I’m not unhappy with these two. Pretty sure
if I can get all three of these out with Yargle I’ve won on sheer flavor,
right?

Next order of business is to encourage your opponents to stop laughing at
Yargle and start sweating instead. 9/3 is already a formidable size, so it
doesn’t take much to make Yargle capable of killing with Commander damage
in two hits. The new card Blackblade Reforged, if drawn in the late game,
can turn Yargle into a one-shot beater. Loxodon Warhammer and Batterskull
provide a serious infusion of life each combat. Glistening Oil can be a
nasty surprise and let you kill someone with poison or beat through an
otherwise indestructible creature.

While 9 power is fierce, that 3 toughness is laughable, so it’ll be
particularly good to have black’s ample removal spells to help clear away a
key blocker to let Yargle rumble on in. Ravenous Chupacabra is a welcome
addition since it can pick up some of Yargle’s Voltron pieces if Yargle is
resting in the command zone. Custodi Lich can help deal with a big,
hexproof Voltron on the other side of the battlefield, while giving you a
little bonus card draw as the monarch. That’s King Yargle, if you’re nasty.

One nice thing about playing mono-black with Dominaria in the mix
is we get yet another cool card that cares about swamps with Cabal
Stronghold. While not as good as Cabal Coffers when combined with Urborg,
Tomb of Yawgmoth, I’m going to refrain from running too many non-basic
Swamps to power up the Stronghold as much as possible. Once people realize
the power of Yargle black’s swamps matter mana generation can pay the
Commander tax with ease.

Since we’re playing with so many Swamps, Korlash seems like a good
inclusion, and it plays along with our theme of having a huge beater. We
can even go for the flavor win by equipping it with Blackblade Reforged,
right?

Outside of the Swamp-matters mana ramp we can certainly make use of other
ramp cards. Conqueror’s Galleon transforms into a land for ramp but it’s
also a Swiss army knife of value, depending on the extra mana you’ve got
floating around. Yargle may be vanilla, but the Frog Spirit can crew a
Galleon just fine, thank you very much!

Ah yes, we want plenty of card draw to keep our hand cooking with gas the
whole game long. Disciple of Bolas seems particularly insane if you
sacrifice Yargle to it. I mean, sorry about that boss, but 9 cards and 9
life is a heckuva deal and heck, maybe we can even equip Yargle with a
Skullclamp beforehand! Since Bolas appears to be messing around in
Dominaria, we can even chalk this up as a flavor win too.

Let’s round things out with all sorts of mono-black goodies. We can toss in
Dark Depths and Vampire Hexmage to draw removal away from Yargle. Dead
Man’s Chest is one of my favorite new cards to combine with pinpoint
removal spells. Vampire Nighthawk and Ophiomancer can play defense pretty
darn good. Ghoulcaller Gisa is another card that loves Yargle’s ample
power.

I traded for a judge foil Xiahou Dun, the One-Eyed quite a few years ago
and am always looking for a good reason to play it. Not only is it a good
utility card (and combos nicely with Nim Deathmantle) but being legendary
helps dial up the threat level with Blackblade Reforged.

Pack Rat and Phyrexian Reclamation can build a decent battlefield presence
out of nowhere if you need to.

Last but not least is the awesome Helm of the Host. It costs a lot of mana
to get going, but I just have to live the dream of equipping it to Yargle
and start churning out extra non-legendary copies of Yargle. Who’s laughing
now, huh?

While I normally go hog-wild on the special lands when running a
mono-colored deck, there are enough Swamp payoffs that I think it’s a good
idea to keep the non-basics to a minimum.

So, what do you think? Am I the only one to be so amused with Yargle,
Glutton of Urborg? Are there any other cards I overlooked to help me get
the last laugh when Yargle takes down another opponent?

For some more Commander goodies, be sure to check out
Sheldon’s recent article where he taps fellow Commander Rules Committee
member Toby Elliott
to help him answer questions from the Commander community. The Rules

Committee isn’t just one monolithic body that moves in lock step, so it’s
nice to get a peek at another perspective from within the group that keeps
our format awesome! Also,
Mark Nestico returns after a brief hiatus to talk about Pauper,
including Pauper Commander
, which takes advantage of the new influx of uncommon Legends from
Dominaria-kinda like Yargle, right?

If you’re disappointed I didn’t write about Whisper this week, here’s the
deck list as it was before I got distracted by the superior Yargle, Glutton
of Urborg. The deck is basically all about getting something big and bad
into the graveyard and then reanimating it with Whisper. I probably need to
work in some other reanimation spells in case opponents keep killing
Whisper, but you get the gist.