Once upon a time, Pete Hoefling decided to create a website to enhance his business buying and selling Magic cards. To bring people to the site, he recruited a handful of people who wrote about Magic to provide content, and I was one of the lucky ones given the job. In that time, I have seen StarCityGames.com grow into a major force in the Magic community and I have been proud to be along for the ride. I have seen many writers come and go since then. Pete has always made being involved with StarCityGames.com feel like family, and each time a writer joined the ranks, I felt like I had gained another brother or sister. I may not have been able to meet most of them face to face, but I still felt a kindred spirit, and have cheered them along the way in their endeavors.

I was thrilled for my brother Gerry Thompson when he won Pro Tour Amonkhet. While I focus on writing about Commander these days, I do still enjoy playing competitive Magic and Gerry regularly delivers honest and entertaining insight into competitive. He also is by all accounts a genuinely nice person, which is a very important quality in my book. So having one of my SCG brothers and a genuine good man win the Pro Tour hit all the right notes for me. Congratulations Gerry! 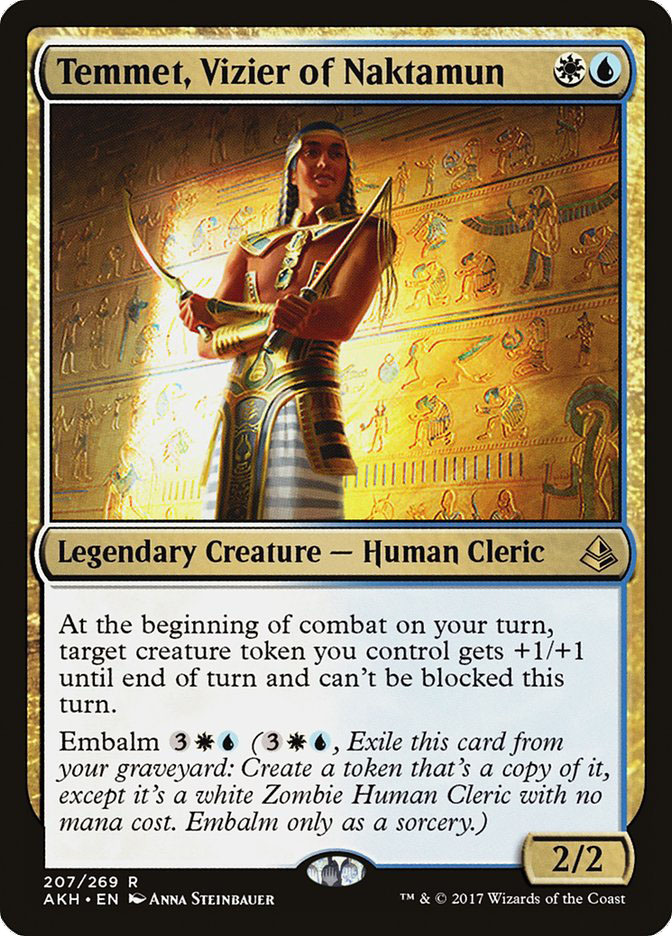 I have to say that Temmet is a flavor home run. The card art certainly invokes the spirit of Tutankhamun, the boy king, and while Temmet cannot be a pharaoh on Amonkhet for story reasons, he has plenty of authority as a vizier despite his young age. Giving the card embalm so that when Temmet dies we can see him again as a mummy, just like King Tut—just brilliant. But R&D didn’t stop the hits there. As a legendary creature with one of Amonkhet‘s feature mechanics, embalm, they figured out a nice way to make him boost a mummy you have on the battlefield – even himself!

They could have easily made his ability just focus on mummy cards – white Zombie tokens – but instead of narrowing the focus, they opened up the ability to target any token creature, which makes Temmet, Vizier of Naktamun Commander gold, especially given Temmet’s color identity. Blue gives us a ton of ways to create tokens, especially tokens that copy good creatures, and white gives us populate to copy the tokens. Before we go too far astray, let us start on Amonkhet and the anointed mummies!

While not every embalm creature made the cut, most of them are at least decent. Sacred Cat may be small, but its superpower is that cheap embalm cost! Turn 1 Sacred Cat; turn 2 Sol Ring, tap it for mana, cast Skullclamp and equip to the Cat, draw two cards. Pay the embalm cost for Sacred Cat, and now you have a token for Temmet to play with next turn. Plus—mummy Cat is adorbs!

Embalmer’s Tools will provide some help shaving down the embalm cost, but the other ability likely will not win any games outside of a dedicated Zombie deck. However, I do like the utility it can provide in disrupting opponents who may want to manipulate the top of their library, particularly with something like Vampiric Tutor.

Pull from Eternity is a weird little card. Originally designed as a way to hose suspend cards, I’ve seen it very rarely used in Commander as a way to rescue a key card that’s been exiled. You do typically need to jump through additional hoops to retrieve it since Pull from Eternity puts the card in the graveyard, but in this deck, when you target a creature that’s been exiled due to its embalm ability, the graveyard is exactly where you want it to be! In addition to bringing back Aven Wind Guide, I can see utility in bringing back Vizier of Many Faces or Angel of Sanctions for another round.

White gives us a bumper crop of “tokens matter” cards. There is the boost of Intangible Virtue and Phantom General. There is the sweet populate mechanic on cards like Rootborn Defenses and Scion of Vitu-Ghazi. Twilight Drover makes lemonade out of the lemons of your tokens dying and then makes more tokens. Then of course there is the big sweeper Hour of Reckoning, which happens to leave behind all your token creatures. Hopefully you are not also being overwhelmed by Goblin or Saproling tokens your opponents have been pumping out.

So we have the embalm mechanic to make tokens and populate to copy tokens. We need more token creatures! The blue side of our color identity provides us with a lot of fodder here. Rite of Replication is the big haymaker if we can kick it, and I like Supplant Form as a way to temporarily remove a threat while making your own, particularly since Temmet can make the copy unblockable. Imagine bouncing Lord of Extinction and getting a token copy that you can make unblockable!

Back from the Brink does a good impression of giving “embalm” to dead creatures in your deck without embalm. Mimic Vat has long been a great Commander card for capturing value creatures to make copies of, so teaming up with Temmet is icing on the cake.

There are some potent pieces of Equipment that often find themselves on the battlefield, including ones that do something sweet when they deal combat damage to a player, so being able to steal one at instant speed, equip it to a Germ token creature, and then make it unblockable with Temmet makes Grip of Phyresis a super-fun inclusion!

Speaking of those sweet Equipment cards, we should definitely play some of our own. Sword of Feast and Famine, Sword of Light and Shadow, and Sword of War and Peace are powerhouse cards that love to be able to attack unblocked, so equip them to a token creature and let Temmet show them the way. Stoneforge Mystic is here to bring the noise and the Swords, and maybe a Blade of Selves to make more tokens (even if they are temporary). I mean, attacking with Stoneforge Mystic equipped with Blade of Selves has to be good, right?

I am not 100% sure on the cipher cards, but I want to try them. Encoding them on a token creature that Temmet can make unblockable seems like a worthy goal, especially Stolen Identity, that makes even more token creatures. We will probably want to pick a time to cast them when it seems that we can at least get one attack through.

We’ve got a few free-standing permanents like Bident of Thassa and Noble Purpose that will give us benefits whenever our creatures deal combat damage, whether unblockable with Temmet or not.

I am rounding things out with some “good stuff” cards that could be found in just about any U/W deck. I went with Pongify over Path to Exile because destroying a creature rather than exiling can be more useful with Mimic Vat. Archaeomancer and Mnemonic Wall might look a little out of place, but with sorceries and instants that make copies, I figure they have some added utility. Who knows, we may want to equip Archeaomancer with Blade of Selves, attack, and make some copies to get back Pull from Eternity to put a creature with embalm back into the graveyard. 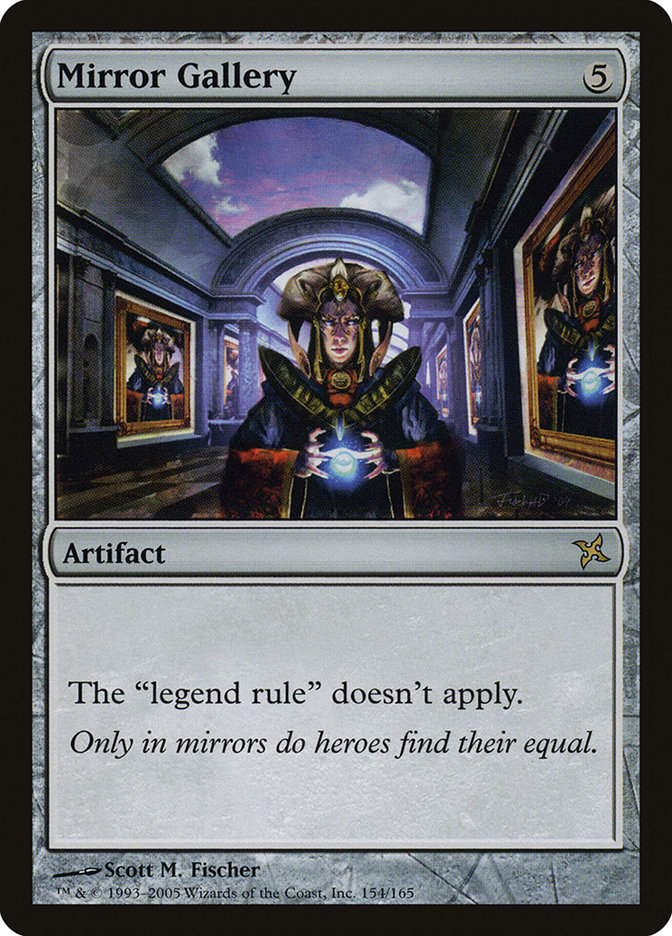 Last up, I am going to add in Mirror Gallery. It would be a mana-intensive slow haul, but with Mirror Gallery, you could build an army of mummy tokens named Temmet, Vizier of Naktamun by putting the card in the command zone rather than exile when you embalm it. Realistically, you could make added copies with populate and other copy effects, which would let you make more and more tokens unblockable. Rite of Replication kicked targeting Temmet, anyone?

Here is what I have dug up from the sands of Amonkhet:

What do you think of the deck? Have I missed any great token synergies that should absolutely be in here? Should I find room for Trading Post so I can attack with unblockable Goat tokens?