I have to hand it to Wizards of the Coast for a block that is just chock-full of awesome flavor. Amonkhet and Hour of Devastation have amazing Ancient Egyptian-inspired callbacks while also forging its own identity. I really like that they added Curses into the mix as a shout-out to the legend of Curses inflicting people who disturb the tombs of ancient pharaohs. 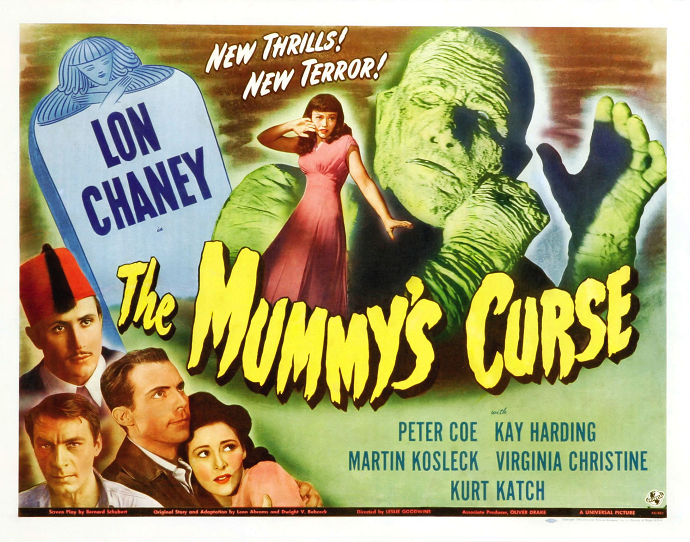 The mummy’s alive and he’s dancing with the devil.

They included a few Curses in Hour of Devastation, and they are fairly high on power level, particularly this one: 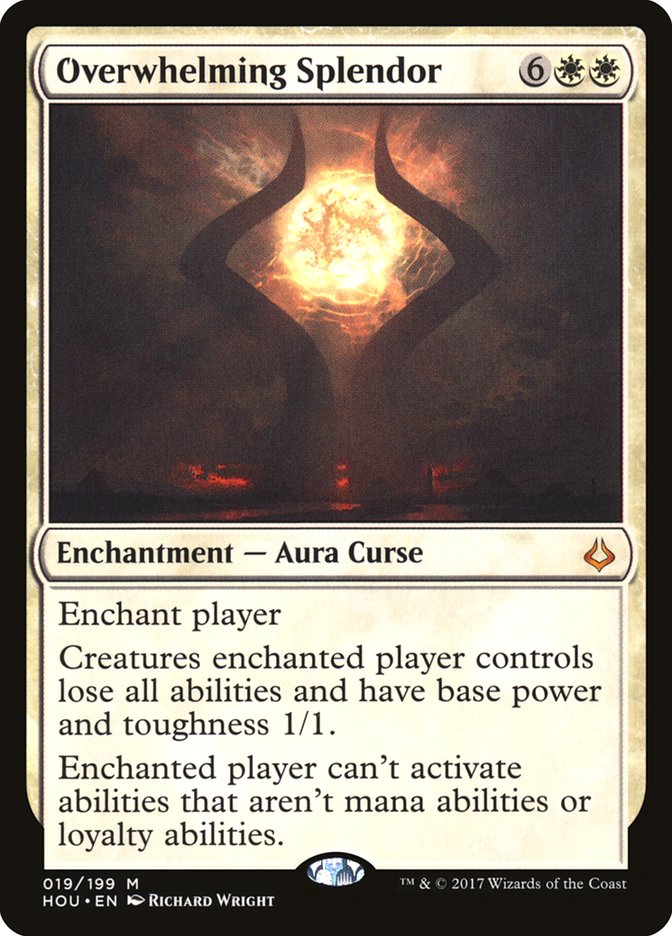 The power of this card is reflected in its high mana cost, which limits its playability in Standard, but we have more options when it comes to Commander! With a new infusion of Curses from the past two sets, it makes me want to build a Commander deck chock-full of Curses. The first thing I did was take a look at all the Curses available. With Commander 2013 we have Curses across all five colors, but there is only one in green. 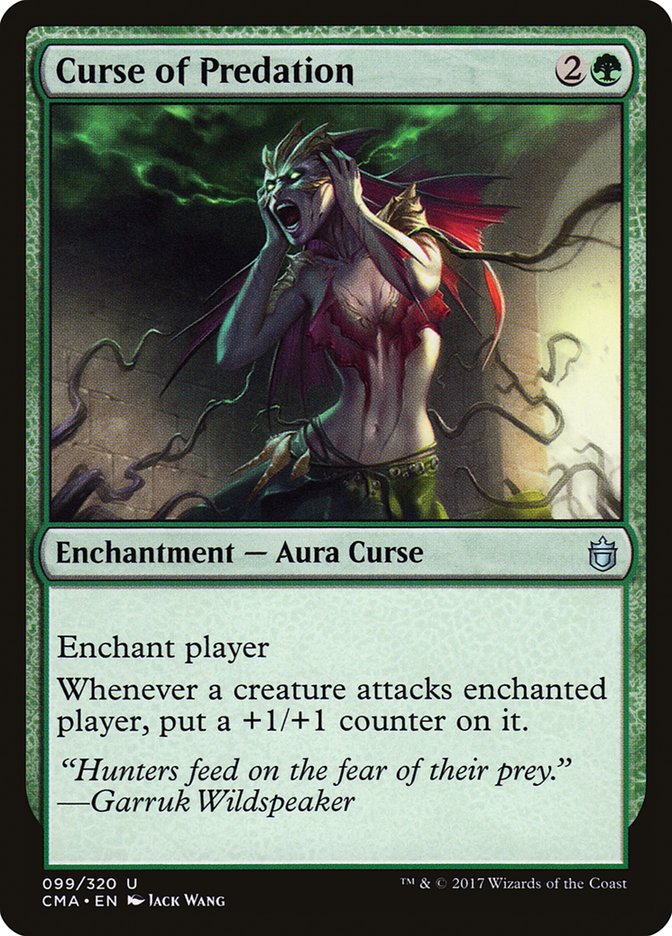 Thanks to Commander 2016 we can make a four-color Curse deck, but as I thought about what our Commander would be, none of the options felt right. Breya, Etherium Shaper wants a deck full of artifacts rather than enchantments. Ditto with Akiri, Line-Slinger and Silas Renn, Seeker Adept. Ishai, Ojutai Dragonspeaker and Kraum, Ludevic’s Opus want opponents to cast spells, but there is a Curse that discourages that, so it is a bit awkward. We could cobble something together from the remaining partners, but none of the combinations felt like a good fit.

Which then begs the question—do we want to go down to three colors? We cannot cut black because it has the best selection of Curses, and we cannot cut white because I definitely want to play with Overwhelming Splendor. Comparing the blue Curses to the red Curses, it quickly becomes obvious which color has the better Curses. Sorry, red. Hit the showers.

Really, the only Curse of the bunch I am going to miss too much is Curse of Bloodletting, but I think we will be okay. Esper it is! Searching through the Esper legendary creatures, one in particular jumps out as a natural fit. And it is a doozy! 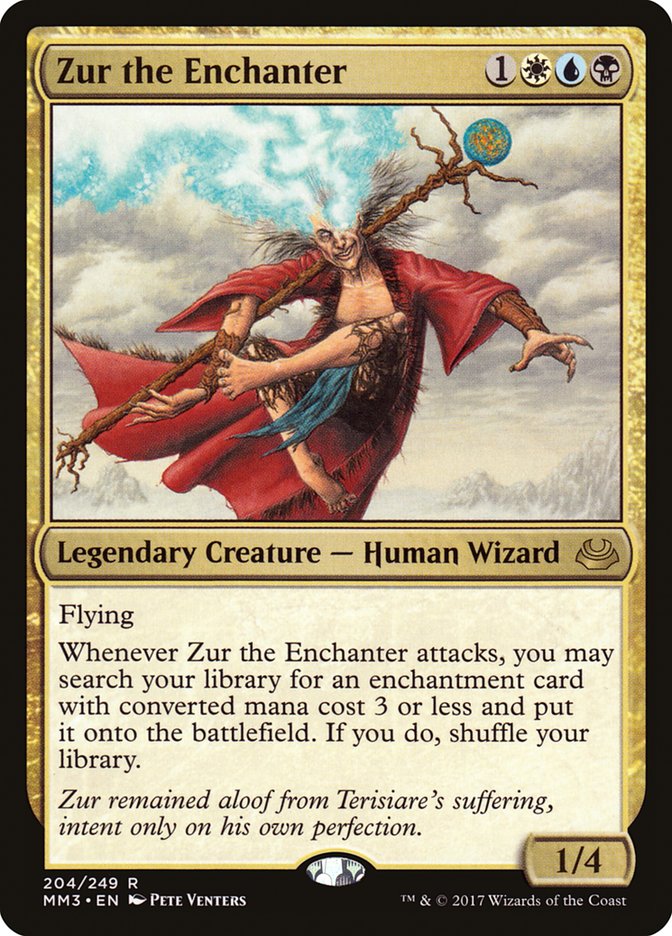 The cons of playing Zur are considerable. Everyone hates Zur the Enchanter because dedicated Zur decks can be nearly impossible to beat. My counter to that is that this is not a dedicated Zur deck; it is a Curse deck. I will take my lumps from anti-Zur bias, but eventually people will learn that my deck is not built to abuse Zur; my deck is about flavor. What is perfect about Zur is it can search up the cheaper Curses just by attacking, which you have to admit is pretty sweet. Curses are enchantments. Zur is an enchanter. Perfect!

Even cut down to just three colors, we have a ton of Curses for our Curse deck! What is fun is figuring out the right Curse(s) for the right opponent. Slap Curse of Vengeance or Curse of Exhaustion (but not both) on the player going nuts with cascade. Layer Curse of the Bloody Tome, Fraying Sanity, and Torment of Scarabs on the player that is not abusing their graveyard. For someone who is abusing their graveyard, let them work around Curse of Oblivion. Overwhelming Splendor and Curse of Death’s Hold form a lock against a creature-heavy deck or an overly abusive commander. Cruel Reality goes to the player who thinks they are above playing creature cards.

Let us not forget the flip side of Accursed Witch, Infectious Curse, gives us a discount on playing more Curses targeting that player.

I really love Bitterheart Witch as a rattlesnake against your opponents. Not only is her deathtouch annoying for attackers to get around, but also if someone plays mass removal and it is not to your benefit, you can hit them with one of the most powerful of the Curses.

Okay, we just finished up with the world of Amonkhet, so it seems only fitting to include mummies in our Curse deck. Of course, “Mummy” isn’t a creature type in Magic and they are lumped in as Zombies, but not all Zombies are mummies, are they?

Thankfully, Amonkhet and Hour of Devastation provide us with Zombies that are obviously mummies to include here, and then I went through and looked at the art of all Zombies in Magic and picked out a few that seemed like they were mummies (such as Cabal Interrogator).

I know it is probably a big flavor-fail to not include Cyclopean Mummy, but that card is just so bad…

Given our focus on Curses, I thought it would be good to include cards that care about enchantments generally and Auras specifically.

Greater Auramancy helps make our Curses a little more resilient to enchantment removal. Copy Enchantment can be another copy of a particularly potent Curse. Sigarda’s Aid lets us cast our Curses at instant speed! Kor Spiritdancer and Sram, Senior Edificer turn our Curses into cantrips (but only when we cast them). Sphere of Safety will make it very tough for opponents to attack you with all the Curses around.

Brago, King Eternal can reset our Curses, letting us move them around to different players if need be. I love that we could be spreading our Curses around the table as minor nuisances, and then when Brago attacks, you can pile all the Curses on one particular player that needs to be taken down!

Through the course of our games, Auras will make their way to the graveyard, so I have Retether, Replenish, and Starfield of Nyx to bring them back. The fact that Starfield will not “wake up” the Curses and make them vulnerable to creature removal is actually a good thing in this deck.

Seal of Cleansing makes it in as utility spell that plays nicely with all the enchantment synergies.

I will round the deck out with some good stuff cards that we can put in any Esper deck, including solid pinpoint removal along with mass removal. Nim Deathmantle plays nicely with some of our creatures that have enters-the-battlefield abilities (especially Sun Titan). If our opponents are working hard to stymie our Curse plan and appear unconcerned about our mummies, well these solid card will help us compete regardless.

If you are a regular reader of my Commander content, be sure to come back Monday where I kick off my new weekly time slot at the beginning of each week!