How are you digging our silver-bordered limited-time-only era of Commander? January 15th is coming up quickly and then the official rules go back to normal, but I have a feeling quite a few Commander players will want to keep an Un-Commander deck around for occasional wackiness! One new legendary creature from Unstable that I am particularly excited about keeping together for a while is Grusilda, Monster Masher! 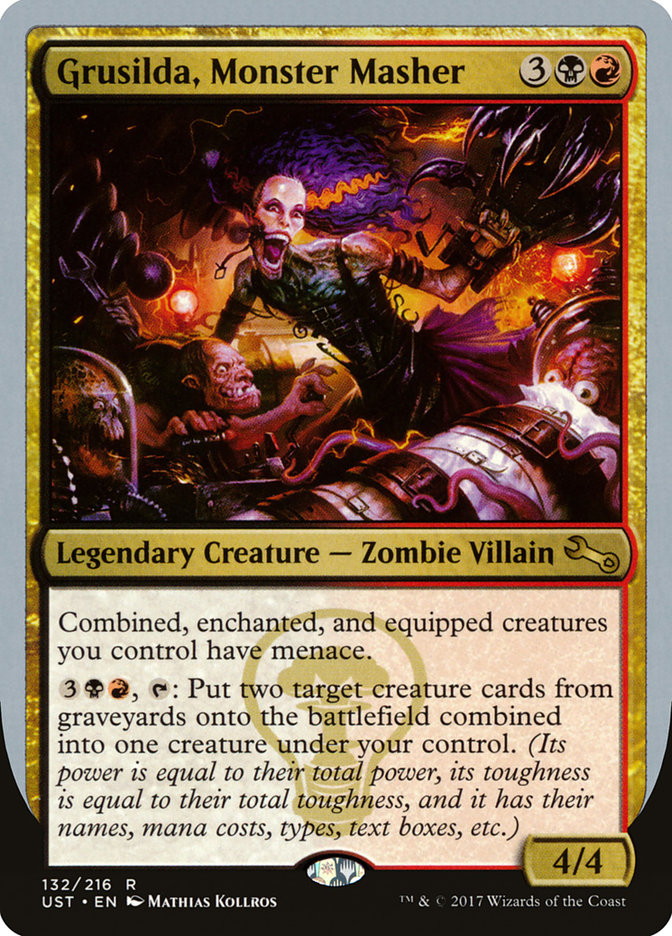 When I first saw this card, my first impression was a Rakdos version of Dr. Julius Jumblemorph. Initial decklist sketches used all the Host and Augment creatures I could muster in red and black. But then I realized that Grusilda could do better than that! Grusilda can mash together any two good creatures from graveyards and profit.

That is a beautiful phrase: “any two.” They could both be from your own graveyard, or one from yours and one from an opponent’s. Or both from an opponent’s. Commander is flush with fantastic creatures, so why limit ourselves to Host and Augment creatures? We can just play the sorts of great creatures we would play in a red and black deck, play lots of removal spells to kill our opponent’s great creatures, and let Grusilda mash together some battlefield-dominating creations!

The exciting thing about Grusilda’s ability is if the combined creature dies, both halves just go back to their controllers’ graveyards. This sort of ability is often attached to some sort of exile clause to prevent abusive recursion, but Grusilda does not play by black-bordered rules. If your mashup dies, you can recombine the part with other creatures that may have been put in the graveyard in the meantime. That is quite powerful and flexible. I am super stoked!

Let us get brewing.

The first ability I wanted to look for was haste. As soon as we can use Grusilda, we may want to attack with her creation, so having one part offer haste seems like a solid plan. Turns out, we have plenty of options and many of them have good text boxes in addition to haste. Mirri the Cursed offers a word salad of abilities on a modest body, so combining Mirri with something much bigger can lead to quite a fierce creature.

What I am really excited about is Party Crasher from Unstable. If an opponent presents an opening, you can activate Grusilda during an opponent’s attack step and combine Party Crasher to get in a surprise attack. How crazy is that?

There are sweet cards that are even better when you put them on the battlefield at instant speed. Disciple of Bolas in response to an opponent’s removal spell targeting one of your creatures. Stuffy Doll when an opponent is attacking you with some giant creature. Dualcaster Mage has flash anyway, but how nice will it be to copy a spell and combine it with something threatening?

Flayer of the Hatebound is interesting. Whatever creatures you combine with Grusilda from your graveyard will trigger the Flayer’s ability. I am curious—if the Flayer is combined with another creature and the combined creature dies, I assume both creatures will come back from the graveyard due to the undying ability, but not be combined any longer. There seems to be precedent from the Eldritch Moon release notes regarding meld:

“Combine” appears to treat the two cards as a single object, which will die with undying and trigger. The undying trigger will return both cards to the battlefield.

Thanks to Wildfire393 from MTGSalvation for pointing this out. That certainly makes undying a great ability to combine with Grusilda!

One brutal combination: how about a 7/7 flying, lifelink, deathtouch Hope of Ghirapur Wurmcoil Engine you can attack someone with and sacrifice to make two 3/3 Wurm tokens and keep that opponent from casting non-creature spells until your next turn? And just keep making that wicked brew with Grusilda? Reserve that play for the player who never ever casts creatures, not even their Commander.

Some creatures are a great collection of abilities but are just lacking in size. Vampire Nighthawk is a great example. But combine it with Grave Titan and now you have something going on! The double strike of Prophetic Flamespeaker or the triple strike of Three-Headed Goblin can certainly use some extra power mixed in.

Necrotic Ooze is not all that small, but in terms of battlefield presence in a game of Commander, it is not all that threatening outside of the abilities it might be copying. A great option for Grusilda to combine it with something else to boost the raw stats and take advantage of non-activated abilities in a text box.

Cryptbreaker can prime the graveyard with big juicy Grusilda targets while making Zombies and possibly even drawing cards. Do not forget Grusilda is a Zombie!

An early Pack Rat can also prime the graveyard with future Grusilda targets while potentially putting together a threatening battlefield presence early on. Later, if you combine Pack Rat with another threatening creature, being able to discard a card to make another copy seems like it could get out of hand in a hurry.

Netherborn Phalanx is not exactly huge, but you can transmute it early to go get something better (like Wurmcoil Engine) and have it in the graveyard for Grusilda fuel. The triggered ability can sometimes flat-out kill a player who may have gone overboard on a token presence.

Hopefully your opponents are playing some tasty creature targets you can combine with Grusilda, but you may need to encourage their early demise to do so. Luckily for us, red and black have no lack of that.

Grusilda is not all that expensive to cast, but neither is it cheap, and I expect the card to be killed by your opponents as often as they can. We will want a fair dose of mana acceleration. Fellwar Stone and Darksteel Ingot can ramp and provide us with off-color mana if we combine a creature from an opponent’s graveyard that has an activated ability using mana we would not normally produce in our deck.

Conqueror’s Galleon is a new favorite I like to find room for in just about any deck where the Commander has power sufficient to crew it. Grusilda works perfectly, coming down the turn after you cast the Galleon so you can go ahead and crew it, attack, and then transform it into a land with a ton of utility.

Faithless Looting is a slam dunk for when we want to fuel our graveyard for Grusilda, as is Wheel of Fortune. Thousand-Year Elixir will let us activate Grusilda the same turn we cast it, or use it twice in a turn, assuming we have enough mana (ahem, Black Market).

Sword of Feast and Famine can help us cast spells during our turn, attack and untap our lands, and have mana available to activate Grusilda.

I have to say I have really enjoyed playing Contraptions in Unstable Limited, so I have decided to juice up this deck with Contraptions. To do so we will need cards that can assemble Contraptions, and Rakdos has a fair number of them. What I like about many of these is that you can play them early to get Contraptions going, and when they invariably die you can combine them with Grusilda later to make even more Contraptions.

The “assemble a Contraption” version of Garbage Elemental with undying is perfect in this deck! Cogmentor is a super-cheap flier early, and if it dies you can lend its flying ability to combine with another creature later.

Our Contraption deck needs at least fifteen different Contraption cards and no more than one of each, so I’ve chosen these.

I think these are some of the best of the bunch, providing utility and power even if you have not been able to get Grusilda to stick around very much.

Here is how the deck has shaken out:

So what do you think? Are there any cards I have overlooked, especially any silver-bordered ones? How would you build it differently? What about the Contraption deck? What cards are you looking forward to playing during our Un-holiday in Commander?