Like the rest of the Commander-loving Magic world, I am chomping at the bit to get my hands on the new Commander 2017 decks!

Previews kicked off last week and were very exciting! I really love the tribal angle to the cards and how many cards can be used in any tribal-themed deck you want.

What is also super-cool is how many interesting legendary creatures that are included as one of the 99 that play nicely with the tribal deck but have their own thing going on. Take for instance Mirri, Weatherlight Duelist. She plays great in the Cat tribal deck, but she could certainly helm her very own Commander deck that does not have anything to do with Cats.

Another one of those cards that caught my eye is Taigam, Ojutai Master.

Taigam is obviously here for the Dragon deck, but because of the creative choice to tie this legend to the Ojutai clan from Dragons of Tarkir, we also get some sweet rebound action. So we want Dragons, and we want instants and sorceries that we would like to rebound, which generally will not include the typical counterspell suite we would be inclined to include in U/W decks. We also want to attack with Taigam early and often. Sounds like a very cool and different deck. 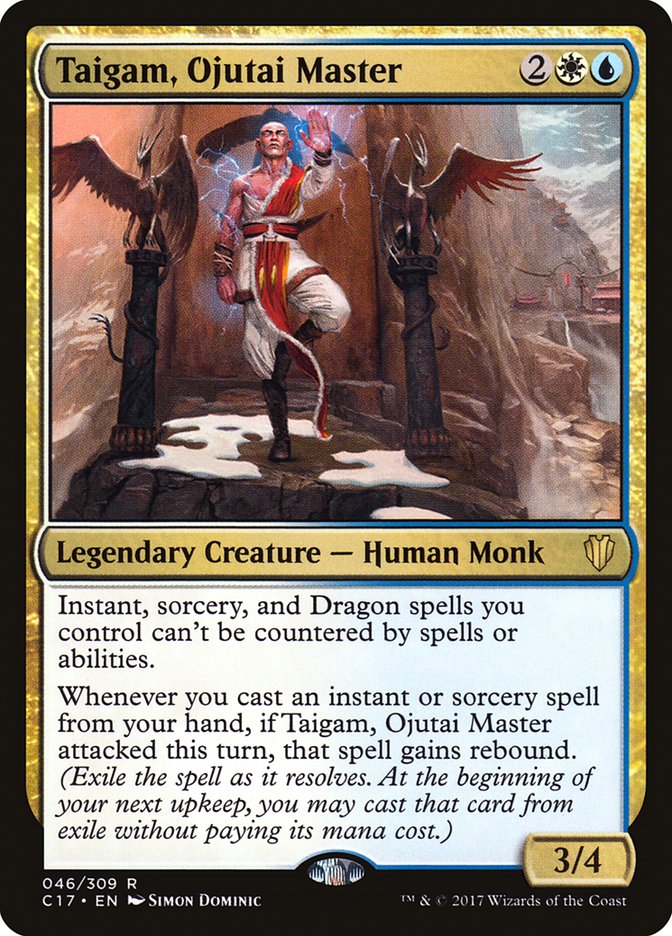 Let us get cracking!

First off, Dragons! Since we are limited to blue and white, the list is not very long but is quite potent, starting with Dragonlord Ojutai himself and ramping all the way up to his earlier incarnation Ojutai, Soul of Winter (who can actually help Taigam attack). Pristine Skywise interacts nicely with all the noncreature spells we will be playing, and Sunscorch Regent is a surprisingly potent force in multiplayer games. But I am super-stoked to poach yet another card from the Commander 2017 Dragon deck, and that’s Scalelord Reckoner. Wow, talk about a potent deterrent from pinpoint removal or even things like Maze of Ith!

Okay, but before the Dragons come calling, we’re probably going to want to play our Commander, attack, and start rebounding. In the early turns of the game, it’ll probably be pretty easy to find someone you can attack, even if it’s running into a blocker you’ll bounce off. That’s quite okay, since Taigam doesn’t care about combat damage; all he cares about is whether you’ve attacked or not. Since I will be playing some cards where casting instants and sorceries matters, I am leaning towards including those card types to help Taigam attack without being blocked and killed. Instants like Shelter are particularly good, since you can declare your attack and cast Shelter before blockers are declared to take advantage of the rebound ability.

Next on the list are instants and sorceries that either replace themselves or generate raw card advantage, since Taigam will let you get even more mileage from them. Rebounding Ponder, Preordain, and Serum Visions is going to almost feel like you are cheating, and if you can rebound Treasure Cruise you are really doing it. Learn from the Past is a nice cantrip that can either shuffle good stuff back into your library or slow down someone who’s doing bad things with their graveyard.

I also looked around for cards that have various modal parts to them. Sometimes the reason for casting an instant or sorcery will not really apply when it has rebounded, so cards with choices give us flexibility. This is especially true with counterspells, which just look silly on the rebound generally, but cards like Supreme Will or Mystic Confluence can let us counter a spell and then do something different on the rebound. I like that Commit can be used in response to someone casting a removal spell on Taigam when he’s attacking, and then when it rebounds, you can clear away a blocker to help Taigam attack again next turn.

These are just good utility cards that are even better when they get rebound. I like how Ephemeral Shields can make Taigam indestructible after attackers are declared and then rebound to do it again next turn. Overloading Cyclonic Rift after Taigam attacks to bounce everything your opponents control and then having it come back around on the rebound seems so wrong and so right, even though it’ll be in single mode that second time.

Return to Dust is a great utility spell, since exiling artifacts and enchantments is so powerful in Commander. Being able to cast it at instant speed after Taigam attacks lets you clear away blockers that happen to be artifacts (or even enchantments) and then rebound to exile something else during your next turn.

I really like how the retrace spells Oona’s Grace and Cenn’s Enlistment work with Taigam’s rebound, sitting in your graveyard to be used and rebounded again when needed. Sram’s Expertise is sweet too, since it lets you cast a spell for free and you would give them both rebound.

Cenn’s Enlistment and Sram’s Expertise got me thinking of a few more instants and sorceries that can create some token creatures to hold the fort until the Dragons come calling. Rise from the Tides seems particularly sweet to cast with rebound later in the game! Nothing quite says “epic haymaker” like Rite of Replication kicked, but playing it with rebound is not bad either.

I’m a huge fan of Monastery Mentor and am always glad to bring it into a deck with plenty of noncreature spells to make a Monk army from (not to mention the prowess). Talrand, Sky Summoner tags some 2/2 flying Drakes onto your instants and sorceries. Jace’s Sanctum is a perfect enabler, letting us cast more instants and sorceries and then scry for others!

When it comes to making tokens out of our instants and sorceries, Metallurgic Summonings does fantastic work in this deck making tokens – some of them quite large – and then with the option of reloading with gas later in the game!

When I was gathering my thoughts on this deck, originally the thought was to make it nothing but creatures, instants, and sorceries, but unfortunately there are not too many options for mana ramp in blue and white, so I buckled down and sprinkled a few mana rocks into the list. I also made room for Swiftfoot Boots to let Taigam attack right away and be resistant to pinpoint harassment.

Here is how the deck shaped up!

Which of the new Commander 2017 decks are you most excited about? I have been trying to decide which of the decks I want to keep together for a while just to play against other Commander precons, and which to buy just to cannibalize for cards. Do you have any thoughts on that?