I’m sorry, Masters 25, but I just can’t stop brewing up ideas from Dominaria! Last week I brought you the amazing five-color Commander Jodah, Archmage Eternal. This week I wanted to focus on the sweet legendary creature that’s only available as a Buy-a-Box promo. Check out Firesong and Sunspeaker! 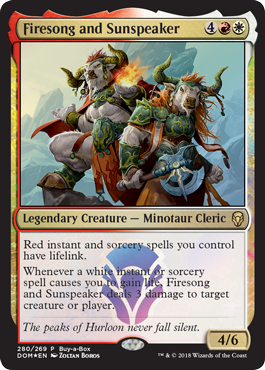 Before I get into the mechanical nitty-gritty of Firesong and Sunspeaker, let’s first put on our Vorthos hat and savor the flavor. Way back in the beginning of Magic, there was a card called Hurloon Minotaur. For three mana, you got a 2/3 creature… and that’s it. Hey, at least the artwork was sweet!

Since then, Wizards of the Coast has given us tons and tons of Minotaurs with sweet artwork and disappointing stats, but now that we’re returning to Dominaria, it’s time to call back to the original sweet-looking, disappointing Hurloon Minotaur. Firesong and Sunspeaker are effectively two three-mana 2/3 creatures stapled together, six mana for a 4/6.

The artwork is sweet! The stats… well… yeah, they’re not the most impressive. We’re in a different time now, where creatures are expected to carry a much bigger and badder role in our games of Magic, so thankfully Wizards added some extra sauce to our Hurloon companions, since games aren’t won by sweet artwork alone.

First up: “Red instant and sorcery spells you control have lifelink.” 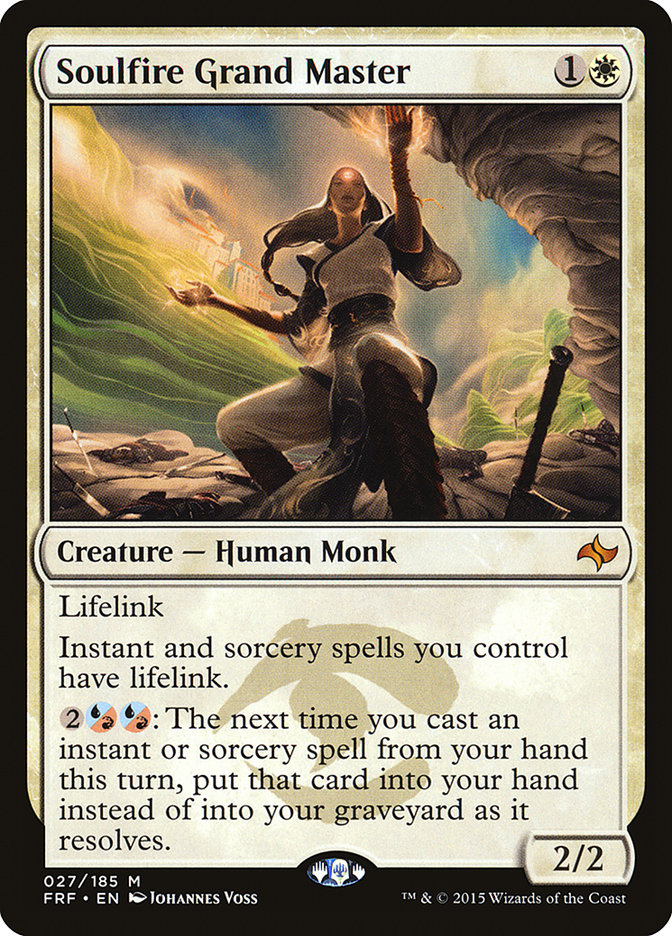 Now this is a sweet ability! I have Soulfire Grand Master in my Kynaios and Tiro of Meletis Commander deck, and giving my spells lifelink has done some crazy fun things. Case in point: Blasphemous Act. Of course, Soulfire Grand Master is one of the 99, so we don’t often get to pull off this sort of combo, so stapling the ability to our Commander is awesome. We can load up on lots of spells that dish out damage, and once we have our Commander on the battlefield, things will get a little nutty.

Next ability: “Whenever a white instant or sorcery spell causes you to gain life, Firesong and Sunspeaker deals 3 damage to target creature or player.”

This isn’t quite as nice since lifegain spells are a little less good in Commander, considering you already start at 40 life to begin with, but getting a free Lightning Bolt for each one you do cast can certainly do some nice work. Notice, however, that with the new way that damaging spells and effects interact with planeswalkers, Firesong and Sunspeaker’s ability specifically can’t Lightning Bolt a planeswalker, which is unfortunate.

The Release Notes have an extensive FAQ on Firesong and Sunspeaker, so here it is for convenience:

With all that in mind, let’s get brewing!

The first order of business: instant spells that dish out damage. Lightning Bolt is already an overlooked Commander card, and with your Commander on the battlefield it becomes a Lightning Helix, but Lightning Helix itself becomes… insane! For two mana, you get to Bolt a target, gain three life, gain three more life, and then hit a creature or player with three more damage. Warleader’s Helix and Energy Bolt do the same sort of thing on a bigger scale.

Price of Progress can dish out a ton of damage in the late-game if there are plenty of players around, and it’ll insulate yourself from the damage since you’ll be gaining it back as life. If the battlefield is complicated and cluttered, something like Fault Line or Starstorm out of nowhere can gain you a ton of life.

Sorceries are where the damage rubber hits the road and stomps on the gas. I mentioned Blasphemous Act before, but how about Star of Extinction? Twenty damage to all creatures with an even moderately cluttered battlefield is going to fuel a massive gain of life! Chain Reaction can get up there too for considerably less mana.

Firesong and Sunspeaker’s ability is going to net you some serious life points once you get it out there, but I did want to include a few cards that synergize well with that. Rhox Faithmender doubles all that life, and Archangel of Thune takes advantage of damage turning into lifegain and grows your team.

If you already want to throw a lot of spells around once you untap with Firesong and Sunspeaker on the battlefield, Aetherflux Reservoir can gain you some life here and there… but most impressively, it will let you cash out a large chunk of your life into a massive life total assault 50 points at a time.

Since the plan is to cast a flurry of spells once I untap with Firesong and Sunspeaker, I naturally wanted to search for some good prowess or similar triggers which will be good whether or not we have our Commander on the battlefield, and the first two that immediately got tapped for the job were Young Pyromancer and Monastery Mentor.

There weren’t too many others I wanted to recruit for the deck after outside of Soul-Scar Mage, which does a nice job of making sure your damage-deal spells can take down indestructible creatures that might otherwise be a big problem. I particularly like that its ability only applies to creatures your opponents control.

Blaze Commando isn’t necessarily in the same league as Mentor and Pyromancer, but in this deck I think it does some good work churning out some more token creatures. Plus, it’s a Minotaur, so it’s got some tribal loyalty to our Hurloon Commander. Kiln Fiend and Satyr Firedancer are two more creatures that synergize quite nicely with what we want out deck to be doing. While neither is a Minotaur, they do show some respect with the horns.

Cathar’s Companion does some nice work surviving our spells that do damage to all creatures on the Battlefield, and if we’re throwing around as much damage as I think this deck will, three points of power isn’t nothing. Pyromancer’s Goggles and Charmbreaker Devils provide a good measure of card advantage, which is a little bit lacking in this color combination.

One downside to our choice in commander is that it costs six mana, and there is some incentive for our opponents to make sure it doesn’t survive for us to untap with it on the battlefield. Boros isn’t known for a lot of mana ramp outside of the usual suspects, but thankfully Ixalan gave us the artifacts that transform into lands to give us some nice ramp when we need it. Primal Amulet is a narrow choice that fits perfectly with what we want our deck to do, and the Primal Wellspring side does a good Pyromancer’s Goggles impression.

Boros can make it tough to scrape up some good card draw and card advantage, but you can find some if you dig for them. I’m lucky enough to have been playing Magic for nearly 25 years, so I have several copies of Wheel of Fortune that I easily toss into my red decks, but it was pointed out to me lately that the singles price on that card is quite high these days. Even so, if you do play red decks, it would totally be worth your while to do what you can to trade for a hashed-up copy of Wheel from some old-timer, because nothing else fuels your hand for that mana cost.

If that’s not an option, I do think Wheel of Fate is a perfectly respectable substitute and in fact is a much friendlier choice, since it gives all your opponents the opportunity to plan for discarding their hand, while Wheel of Fortune is usually an unpleasant surprise for at least one of your opponents.

Outside of the O.G. Wheel, there are some reasonable other choices like Magus of the Wheel, Reforge the Soul, Runehorn Hellkite and the medium-expensive Memory Jar. Boros can even get vicious with the Wheel effects by pairing them up with Alms Collector, but be prepared for a very grumpy table to turn their wrath your way.

So, our Commander costs a whopping six mana and our best plays revolve around having it in play, so I think it’s a good idea to do what we can to protect our investment. Most of these choices can be cast before our Commander and can immediately provide protection. Boros Charm is a nice instant that can provide protection, but the other modes are great too in a deck such as this.

Let’s round out the deck with some “good stuff” cards. Red gives us some nice spells that copy other spells, which we can use to leverage a big turn for ourselves or give us some utility options when other players cast their spells. Speaking of big turns, the overload on Mizzix’s Mastery can give us a ludicrous turn if everything lines up right.

I really like Reveillark and Sun Titan giving us a nice way to recover from the inevitable battlefield wipes.

So, what do you think? Agree with some of what I’ve laid out here? Disagree? Let me know your thoughts this exciting new Boros commander!

For more Commander goodness, be sure to check out Sheldon Menery’s recent article Masters and Commander, where he digs deep into the juicy reprints in Masters 25 that you’ll want to snag for your Commander decks. There are some great cards for Commander that have gotten pricey over the years, so it’s nice to have a fresh batch of them to bring down the price and make it easier on our pocketbook to pick up now.

And if you’re eager for more Dominaria for Commander nuggets, be sure to read Mark Nestico’s Coming Soon to Dominaria, Part 1. Mark does a quick rundown of legendary creatures revealed from the Release Notes, and there are so many he had to break his column into two parts.