I am super-excited about Rivals of Ixalan and spent a good portion
of the weekend before last poring over the card image gallery and brewing
up deck ideas. For Standard, the card I’m most excited about is Path of
Discovery. I’ve got quite a few full and partial decklists written up
featuring the card, including adding it to my “Mono-Green Zombies” Dinos
and Deserts deck I’ve been running for a couple of months. Merfolk
Branchwalker has been doing fantastic work in the deck smoothing out draws,
and I’m looking forward to attaching that ability to all of my creatures.
If you’re interested in my Standard brews, be sure to check out my

There is a ton to get excited about for Commander fans, in particular the
new “Elder Dinosaur” legendary creatures. For old-school Commander players
who still call the format “EDH,” it is kind of neat that the acronym for
Elder Dragon Highlander can now refer to Elder Dinosaur Highlander. In the
earliest days of the format, each player chose an Elder Dragon legendary
creature to build a deck around. I wonder if people will do the same with
Elder Dinosaurs?

Now that we have seen each of them, I have to say that all of them offer up
some cool deck building options. Since Ghalta, Primal Hunter was given out
as a special foil participation prize for the Store Championships in
December,
I already wrote up one deck utilizing its cool ability about a month
ago
. Today, I wanted to build a deck around what I’ve heard referred to as
“Akromasaur,” calling back to a previous eight-mana legendary creature also
chock-full of abilities: Akroma, Angel of Wrath. I am talking about
Zetalpa, Primal Dawn! 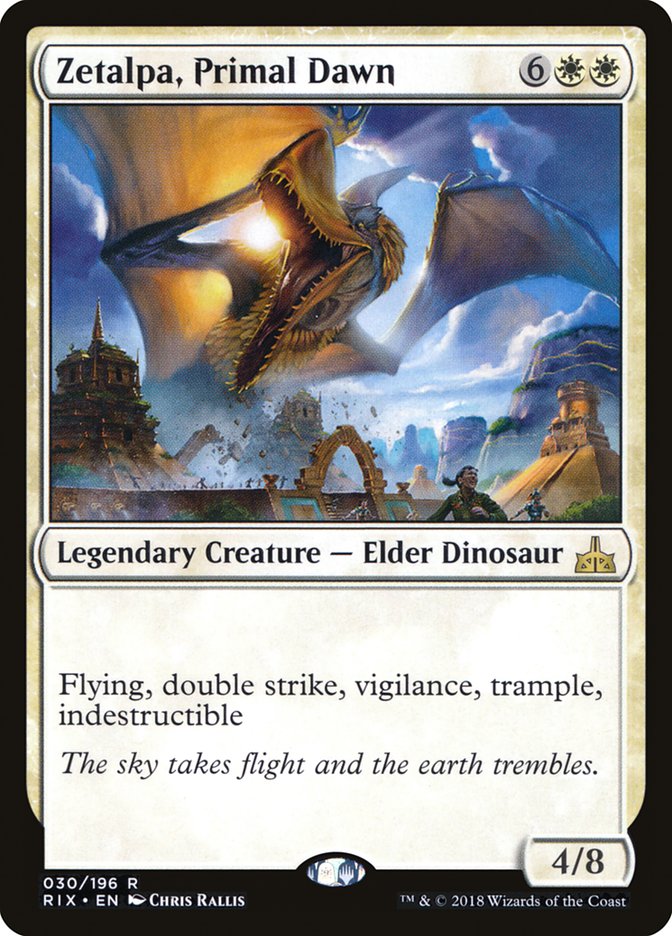 In terms of raw “word salad” volume, Akroma comes out ahead here. However,
if we take a closer look, Zetalpa looks quite good in comparison. They both
have flying, trample and vigilance, stellar abilities in just about any
Commander game. Zetalpa’s double strike is a strict upgrade to Akroma’s
first strike ability, and you could squint and count it as two abilities,
since the ability counts as doing both first strike and regular combat
damage.

You can also draw comparisons between Zetalpa’s indestructible ability and
Akroma’s protection from red and protection from black abilities. I would
say indestructible gives Zetalpa the edge here, making it immune to
sweepers like Wrath of God, while recognizing the corner cases where the
protection ability makes Akroma able to run past red and black blockers
while Zetalpa can run into blockers of any color.

The big advantage that Akroma has over Zetalpa is haste, which is crucial
on a creature you pay so much mana to cast. When you spend eight mana, you
want to make sure the creature gets in at least one good attack for your
investment. Zetalpa sits around and waits for all of your terrified
opponents to have a go before it gets down to business. Zetalpa hits harder
than Akroma so it will catch up on the damage race eventually, with both
able to kill with Commander damage the fourth turn after casting.

Outside of the text box, there are some important differences. Zetalpa
requires less colored mana to cast, which makes it easier to play outside
of a monowhite deck. The higher toughness of Zepalta can sometimes matter
when it comes to -1/-1 effects, and it is incredible in decks that care
about toughness—Zepalta is a slam-dunk top-end finisher in a Doran, the
Siege Tower deck.

For me personally, I think Zepalta is a more exciting choice for a
Commander than Akroma, but there are certainly plenty of reasons to play
the Angel of Wrath too. Let us dig in and explore what it means to follow
the lead of the Primal Dawn.

The first thing we need to keep in mind is that eight mana is quite a steep
price to pay for your commander, especially since we don’t have access to
green’s mana ramp spells. However, white has had a few mana ramp spells
printed over the years, like the conditional Knight of the White Orchid,
along with Kor Cartographer doing a halfway Solemn Simulacrum imitation. We
can also make use of the standard artifact ramping from cards like Sol
Ring, Worn Powerstone, and Gilded Lotus.

But I am particularly interested in the cards from Ixalan and Rivals of Ixalan that transform into lands. While the special
abilities on these lands get most of our attention, for purposes of casting
our expensive commander, all of these cards count as mana ramp. Since many
are artifacts, we can cram a bunch of them into our deck. I may be going a
bit overboard here, but I am curious to see how these play out as the core
of our ramp strategy.

Since I am running a fair amount of artifacts and especially Equipment, I
decided to try Inspiring Statuary as a way to provide a large infusion of
mana to cast Zetalpa.

Zetalpa’s abilities are great on their own, but why should we stop there?
Basilisk Collar seems like a great addition, as the deathtouch works
fantastic with both double strike and trample and the lifelink is always
helpful. Loxodon Warhammer gives us lifelink too, but even better, it
provides six addition points of damage due to double strike. Bonehoard and
Sublime Archangel are some great ways to seriously boost Zetalpa’s damage
into one-strike killing with Commander damage.

When a white commander provides this number of keyword abilities, can
Odric, Lunarch Marshal be far behind? Why, yes, I would like to give all
those abilities to my creatures each combat, please!

When playing a white Commander deck, you have to have a really good reason
not to include the combination of Scroll Rack and Land Tax. Hitting land
drops each turn is an important part of trying to cast Zetalpa as soon as
possible, and these sorts of cards can certainly help. Outside of the land
fetch, we can certainly make use of Skullclamp, Thraben Inspector, and
Mikokoro, Center of the Sea for some raw card draw, and I think Arch of
Orazca should gift us the city’s blessing consistently.

The deck looks to be running quite a few artifacts, so it made sense to
include some cards where lots of artifacts-matter cards like Puresteel
Paladin, Etched Champion, and Scrap Trawler. There are also some other
artifacts I wanted to add, like Temple Bell for more card draw and Hope of
Ghirapur to shut down an opponent’s counterspells the turn I want to cast
Zetalpa.

Any good white deck will want to use the many great removal spells
available for Commander. I am particularly happy about Path to Exile and
Settle the Wreckage here, since they can reactivate cards like Land Tax
that might otherwise cease to provide you cards in the late-game once you
have ramped your mana.

Eldrazi Displacer is a fantastic utility card, not only messing with your
opponent’s creatures but often protecting Zetalpa from an exile or –X/-X
effect that would otherwise circumvent its indestructible ability.

I will round out the list with these great Commander cards. Karmic Guide,
Reveillark, Sun Titan, Emeria Shepherd, and Emeria, the Sky Ruin provide
good card advantage engines later in the game. The bodies from Monastery
Mentor and Regal Caracal provide good defense in the early-game while you
are ramping towards casting your commander, and Indestructibility provides
nice emergency protection from one big threat.

Even though Zetalpa is resilient and we’ve lots of ramp, if games go long
enough, I imagine the Commander tax plus regular casting cost could make
Zetalpa difficult to recast after a while, so adding Command Beacon seemed
like a good idea, especially since you can get the land back with cards
like Sun Titan.

What do you think? How would you go about building this deck differently?
Which of the new Elder Dinosaur legendary creatures has you most excited?

For more Commander perspective on Rivals of Ixalan, make sure to
check out Mark Nestico’s
Competitive Commander: Rivals Of Ixalan Additions
; he gives his initial thoughts on the Elder Dinosaurs for Commander along
with a bumper crop of other cards. And keep your eyes peeled for the set
review by Sheldon Menery, a must-read for every Commander fan!