So Masters 25 has been fully revealed and will be available for
consumption next weekend. I think they did a pretty good job finding cool
cards to reprint from every Magic set ever printed, and I imagine drafting
it will be a lot of fun. There are a fair number of goodies that Commander
fans will appreciate too, though I wish they’d made some different choices
from the Commander products.

One card that caught my eye was Hanna, Ship’s Navigator. 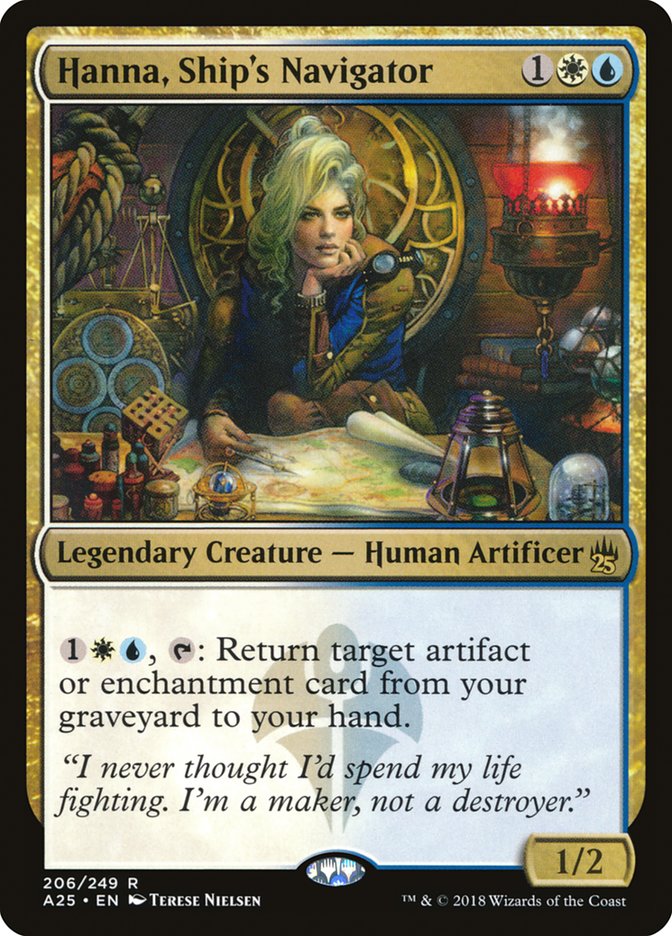 Nothing against Dave Dorman, who did the art for the original printing of
the card way back in Invasion, but Terese Nielsen’s artwork is
beautiful and riveting. Nielsen’s art was used when the card was reprinted
in Commander 2016, so I’m a little perplexed why they printed it
again so soon. If you missed the reprint a couple years ago, now is a good
time to pick up the card.

I’m actually glad they did reprint it, because admiring the artwork drew me
in to reading and thinking about what the card does and what a Commander
deck built around Hanna might look like.

Hanna is definitely not a powerhouse commander. Even for just three mana,
the stats are small, and the activation cost is not insignificant. You’re
not going to want to be using Hanna to bring back expensive enchantments or
artifacts from the graveyard since you’re already having to invest three
mana to activate the ability.

I have to admit, the first place my mind went with Hanna was all the cool
new artifacts we’ve recently gotten in Kaladesh and Aether Revolt. But then I realized we have no dearth of ways to
reuse artifacts in Commander that are more efficient than Hanna. That’s not
to say we can’t include some sweet artifacts, but that wouldn’t be my
focus. Instead, I thought it might be more interesting to lean towards
enchantments. Maybe a lot of auras? In fact, wouldn’t it be fun if we could
use some sweet auras to Voltron our one power Hanna into being a true
threat to take people down with Commander damage? In particular, if we
could give Hanna vigilance you could both attack and then use the activated
ability later to get back an artifact or enchantment from the graveyard.

I realize that we already have a legend available in U/W that loves auras
and is perfectly happy to Voltron into a giant monster– Bruna, Light of
Alabaster! In this case though I’m interested in the more grindy aspect of
Hanna and the utility the card can provide outside of just auras. Also,
killing someone with Commander damage with Bruna is old hat; trying to do
it with Hanna is a journey worth taking!

With that in mind…

As we know from Hexproof in Modern, Ethereal Armor plus Daybreak Coronet
and a couple other enchantments can add up to lethal in a hurry, and
Daybreak Coronet even gives us the vigilance that we’re looking for. The
totem armor ability of Felidar Umbra and Mammoth Umbra provide some measure
of protection from removal spells. Sage’s Reverie is a card I’ve had my eye
on for a while, and this deck is the perfect place for it. A source of card
advantage and size boost that scales nicely as the game progresses,
especially if Hanna has been able to keep you flush with auras.

Spirit Loop and Angelic Destiny both have great abilities, including coming
back to your hand if it goes to the graveyard from the battlefield. They
are tough to get rid of permanently on their own, so having Hanna as backup
means you’re likely to have access to these auras the whole game. Spirit
Loop in particular is nice because it provides the effect of lifelink
without actually providing lifelink, so it’ll stack with something that
actually provides lifelink.

Fool’s Demise is another aura that comes back to your hand on its own, and
while you can use it to potentially steal a creature from your opponent,
you can also use it on your own creature to improve its durability.

Arcanum Wings is a fun card from Future Sight. Its aura swap
ability can do some tricky things with something like Spectra Ward or
Felidar Umbra, and you can get a big mana discount if you use it to cheat
out Eldrazi Conscription. With enough mana, you can use Hanna to pick out
of the graveyard whatever aura is right for the moment and put it onto the
battlefield with Arcanum Wings, all at instant speed.

Thinking about auras, I was reminded of the bestow creature from Theros block. They were an elegant solution to two problems that
has long plagued Auras in Magic-first, how do you address the inherent risk
in playing auras on creatures and risking losing two cards from one removal
spell or combat gone wrong? And second, how can you mitigate the issue of
not drawing enough creature spells and stranding auras in your hand with
nothing to cast them on? The bestow mechanic let you play them as creatures
when you need a creature, or an aura when you need an aura. And if the
enchanted creature leaves the battlefield, your aura turns into a creature
on the battlefield. Having a fair number of them seems like a good idea
with our strategy, and I like just being able to pull out creatures from
the graveyard with Hanna if we need to build our battlefield presence.

Of course, thinking about Theros block brings to mind the heroic
mechanic, another design intending to make casting auras more beneficial. I
think these are the best of the bunch for a Commander deck that’s most
focused on enchantment recursion rather than heroic, specifically. I like
that Vanguard of Brimaz and Phalanx Leader support shifting gears and going
wide if you need it. Tethmos High Priest does a nice job of bringing back
his fellow heroes when they meet an early demise.

I’m a big fan of Darksteel Mutation and Imprisoned in the Moon, two
enchantments that can handle problems that other forms of removal can’t. In
particular, they can neutralize a problematic commander because killing it
or trying to exile it just puts it back in the Command Zone to be recast.
Of course, eventually your opponent finds a way to destroy enchantments and
then the problem is back, so having Hanna to bring them back is fantastic.

Prison Term is a nifty removal spell that you can use early and then move
it to something more threatening as the game progresses. Being able to
bring it back with Hanna is amazing.

Going deep on auras, we can tap into all the cards that do cool things when
we play enchantments and auras. Sigarda’s Aid turns all our auras into
combat tricks. Kor Spiritdancer, Mesa Enchantress, and Sram, Senior
Edificer provide a nice card-drawing engine. Sphere of Safety provides
solid defense while Sigil of the Empty Throne can churn out an impressive
offense.

I’m not the biggest fan of tutor cards in Commander, but I’ll make a couple
exceptions towards the top end of the curve. By the time we play Sovereigns
of Lost Alara or Boonweaver Giant you’ll probably have a pretty good idea
of the aura you need and if not, Eldrazi Conscription is a trusty default
choice.

In my search I kept an eye out for enchantments that sacrificed for some
useful effect that we could use over and over again with Hanna. Since Hanna
is going to tie up three mana, I leaned mostly on the lower end of the mana
curve with cards like Seal of Removal. Angelic Renewal provides a nice
measure of durability towards non-exile creature removal, and I suspect
it’ll be used mostly to keep Hanna on the battlefield. Seal of Cleansing
and Aura of Silence are nice safety valves to take out problematic
artifacts and enchantments.

I didn’t want to completely neglect the artifact side of Hanna’s ability.
Outside of the usual suspects – Sol Ring, Skullclamp, Solemn Simulacrum –
Inventor’s Goggles is a nice way to boost Hanna’s stats. Legion’s Landing
is a great way to get some mana acceleration going once you transform it,
and if it gets destroyed before you get to do that (or maybe destroyed by a
Strip Mine), it’s nice you can get it back with Hanna.

We’ll round out the deck with some removal spells and a few counterspells
that might come in handy and top it off with Dragonlord Ojutai and Sun
Titan, who are simply awesome creatures that aren’t bad targets for auras
if you need them to step it up.

Here’s how the deck looks with the lands added in:

So, what do you think? Agree with some of what I’ve laid out here?
Disagree? Let me know your thoughts on auras in a Hanna Commander deck.


For more Commander goodness, be sure to check out
Sheldon Menery’s fun mailbag article last week
. There’s even a dash of absinthe, Tide Pods, and The Illuminati in there
for your entertainment. Over on video the
Commander Vs crew get competitive and cut throat
just to see how the other side lives. Justin gets gorgon with Damia, Sage
of Stone, Stephen Green rocks mono-red with Etali, Primal Storm, Jeremy
partners up with Thrasios, Triton Hero and Tymna the Weaver, and Jonathan
Suarez is regulating the graveyard with Anafenza the Foremost.