Commander 2018
is almost upon us! I know some lucky ducks at Gen Con were able to get
their hands on the set a week early but the rest of us have to wait
patiently until the end of the week. I am super stoked about all the new
cards and can’t wait to see them in action. In particular the new legends
call out for some cool decks built around them. But what should I start
with?

I thought it might be fun to leave that up to my followers on Twitter, so I
ran two polls. The first one was choosing which deck to choose a legend
from. Bant jumped out to an early lead, but then Jund pulled ahead. Esper
made a late run at it, but Jund eventually held out and won the vote!

Which of the new #MTGC18
decks would you like me to pick a legend from to brew up a Commander deck
around for next week’s column?

So then I ran a poll on which new legend from the Jund deck to build
around. Xantcha jumped out to a sizeable lead almost immediately, and while
Lord Windgrace made it interesting, Xantcha sprinted all the way to the
finish line. Not exactly subtle for a Sleeper Agent, but the people have
spoken-Xantcha it is!

#MTGC18
NATURE’S VENGEANCE won the poll! Which of its new legends would you
like me to brew up a Commander deck around for next week’s
column?

I’d have been happy with any of the new legends, but I was pretty stoked
that Xantcha was chosen. It’s such a very interesting design with some
really cool deckbuilding implications. 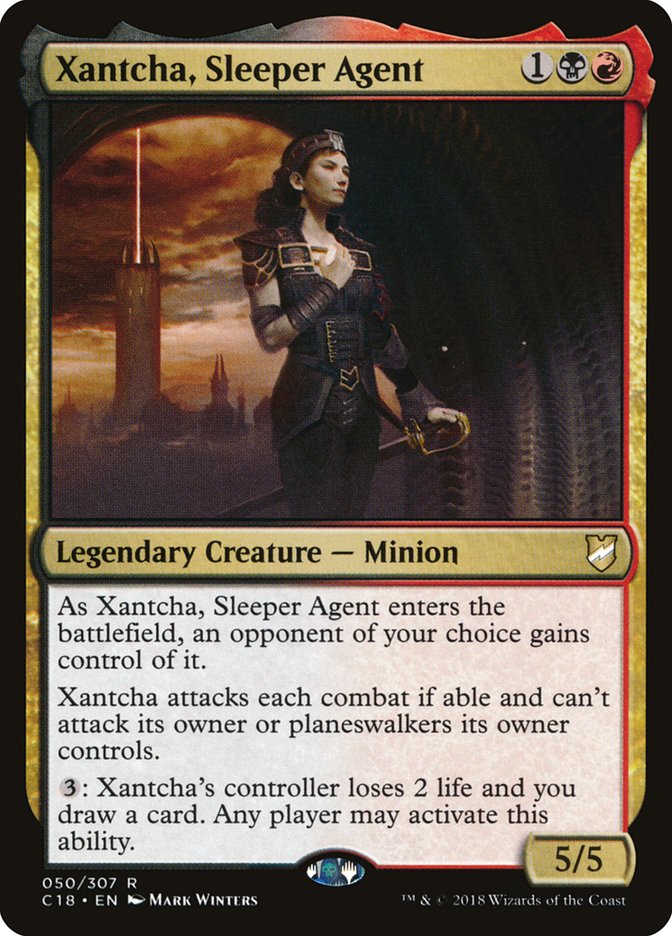 When Xantcha’s played it takes the normal flow of a Commander game and
spins it in another direction. I mean, what Magic player can resist the
siren call of drawing cards on demand? Especially if it means dinging an
opponent for two life each time? But then of course that opponent has
control of a three mana 5/5 creature that has to attack, so if you’re
spending mana on drawing cards you’ve got less mana available for defense.

So, two opponents are dinging the third opponent for cards, but then
Xantcha is attacking one of them because it can’t attack you… and you just
sit back and watch them kill each other. A perfect plan!

Of course, your opponents aren’t necessarily going to cooperate, and while
Xantcha is pretty big on turn 3, even a 5/5 can get outclassed relatively
early if an opponent resists spending mana on drawing cards. Xantcha’s
controller might even try to kill it with direct removal. So, I think a big
part of a Xantcha deck should be dedicated towards making Xantcha difficult
to kill.

Wizards may have recently decided to stop making cards that regenerate, but
there are plenty of ways to do it throughout the history of Magic. The
instants are a nice way to counter a removal spell or as a surprise combat
trick, but I like Thrull Retainer and Goblin Chirurgeon because they sit
out there and maybe persuade opponents to turn their removal spells to
something else. Goblin Chirurgeon’s potential reusability makes me want to
play with more Goblins so I’ll keep an eye out for that.

Cards like Wrath of God specifically say you can’t save a creature with
regeneration so in those cases making it indestructible does the trick.
There are only a few of them in black or red so use these sparingly.

A common way an opponent will use to try and get rid of Xantcha is to
attack it into a larger creature or a gang of creatures. Although this will
require cooperation from the defending player, they may decide it’s better
to stop your own fiendish plans and comply in which case a removal spell
will be helpful in keeping Xantcha around. I like Jaya Ballard here as a
way to make gang-blocking difficult, but also given the number of three,
four, and five mana commanders running around you can sometimes just
straight up destroy a potential blocker for just one red mana. Replenish
the card you pitched to activate Jaya by activating Xantcha’s ability just
for the rub-ins.

I like the idea of using some Auras to help make Xantcha more difficult to
deal with since you can potentially make up the inherent potential card
disadvantage by activating Xantcha’s ability. We can also play enchantment
creatures with bestow like Herald of Torment and Nighthowler that help
mitigate any two-for-one issues.

Rime Transfusion is an awesome card to enchant Xantcha with, and if there
are any blockers you can just pay a snow mana to make it unblockable. So I
guess we’re running snow lands!

Dead Man’s Chest is a card I’m in love with and look for any reason to fit
it into any removal-heavy deck. I feel like it’s decent to put on Xantcha
since the opponent will likely try to get rid of it and you might not be
able to save it.

There are some other cards we can include that help facilitate fighting
between our opponents, like Curse of Opulence and Curse of Stalked Prey.
Vow of Lightning and Vow of Malice can help keep threatening non-Xantcha
creatures off your back and hopefully attacking your other opponents. And
the new Hidden Staircase give you some redundancy for Xantcha’s attacks.

With Xantcha’s activated ability it certainly behooves us to have plenty of
extra mana lying about. The extra drawn cards will also help keep you
dropping lands every turn, but a Terrain Generator can make that even
faster. I like Victory Chimes here since it basically trims the cost of a
single Xantcha activation on your opponents’ turns by one mana. Neheb is a
fun way to turn life loss into more mana, which plays both sides of
Xantcha’s activated ability.

Your opponents will tolerate your pressures to fight amongst themselves
only so long, and the surest way to stop your shenanigans is to knock you
out of the game, so I’ll want some ways to keep that from happening.
Darkness is an awesome, cheap way to negate an alpha strike, and so is
Sudden Spoiling (which is also a nice combat trick when Xantcha is
attacking). Imp’s Mischief can protect you or Xantcha from an unfortunate
targeted spell. No Mercy and Kazuul, Tyrant of the Cliffs make attacks
costly in various ways. Lifegain from Basilisk Collar, Wurmcoil Engine, and
Exsanguinate gives you a nice buffer.

To boost the chance of Goblin Chirurgeon being reusable I’ve included a
fair number of Goblin cards, especially ones that creature extra Goblin
token creatures.

I’ll round out the deck with some good stuff cards. Phyrexian Reclamation
is a nice way to bring Xantcha back from the graveyard if it dies and the
commander tax has gotten too steep. Reiterate combines with Mana Geyser to
potentially give you arbitrarily large amounts of red mana, which you can
pump into Xantcha activations to whittle away the last few life points.
Speaking of mana, Heartless Hidetsugu combines with Neheb, the Eternal to
give you a huge rush of mana on your second main phase, as well as reduce
everyone’s life totals down so that Xantcha’s activated ability can be
lethal.

69 total cards, plus 38 lands, equals just 7 cards over the line. The mana
curve looks pretty good, with quite a few cards at the lower end. I think
that makes sense given how focused we are at casting Xantcha and protecting
it from harm, and then hopefully having some extra mana around to draw some
extra cards in the meantime. Still, we need to make some cuts. 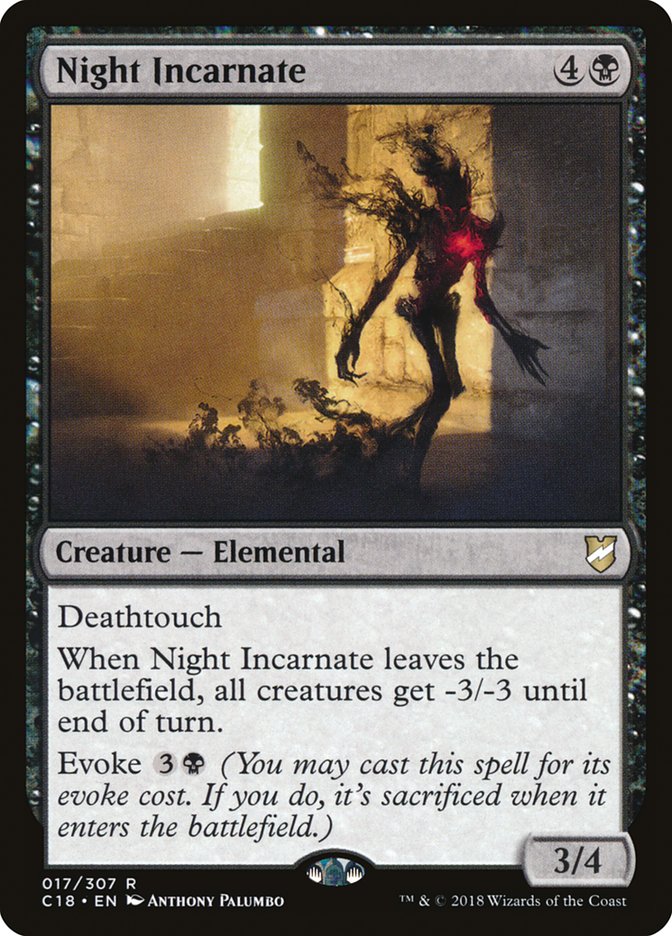 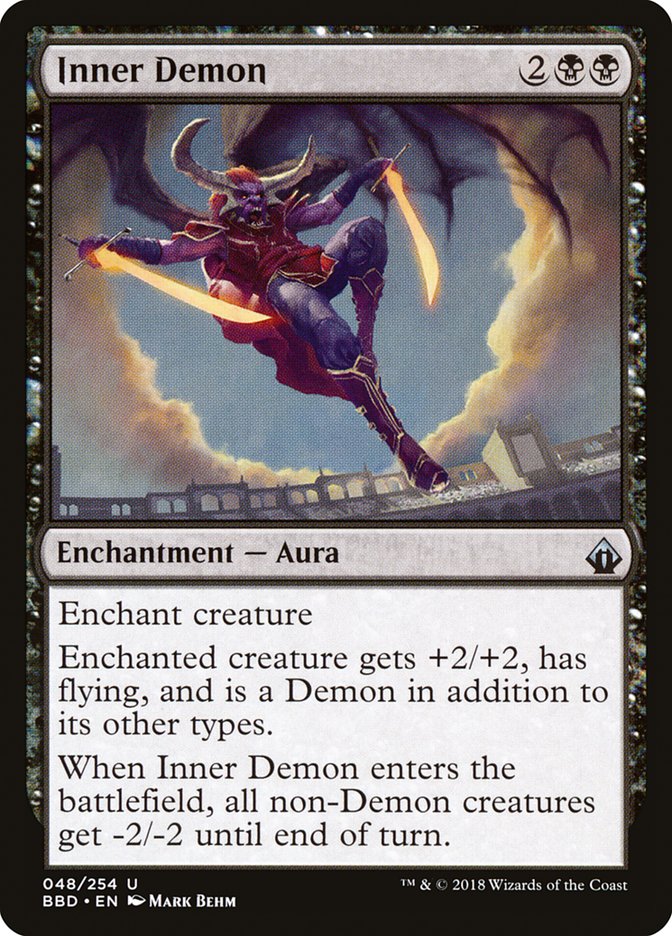 I like pretty much all the cards near the top of my curve, but I realize as
I’ve added more Goblins to the deck that Night Incarnate, a sweet new card
from Commander 2018, might lead to some awkward situations where I
lose my own chump blockers. So, I think that’s a safe cut. Inner Demon is
in a similar space, even though I like being able to boost Xantcha’s power
and toughness and give it flying. I think it makes sense to cut it too. 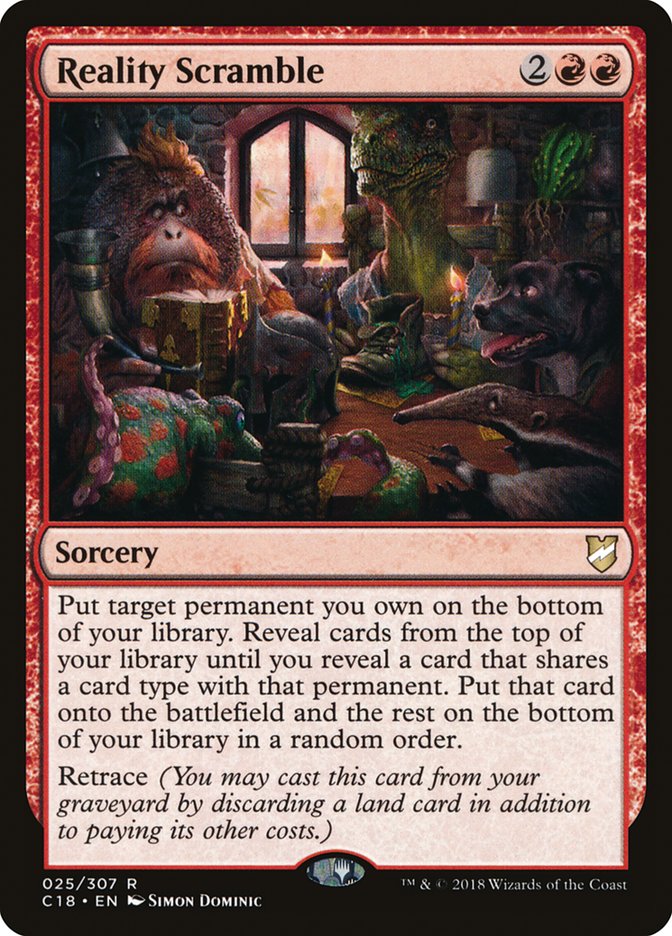 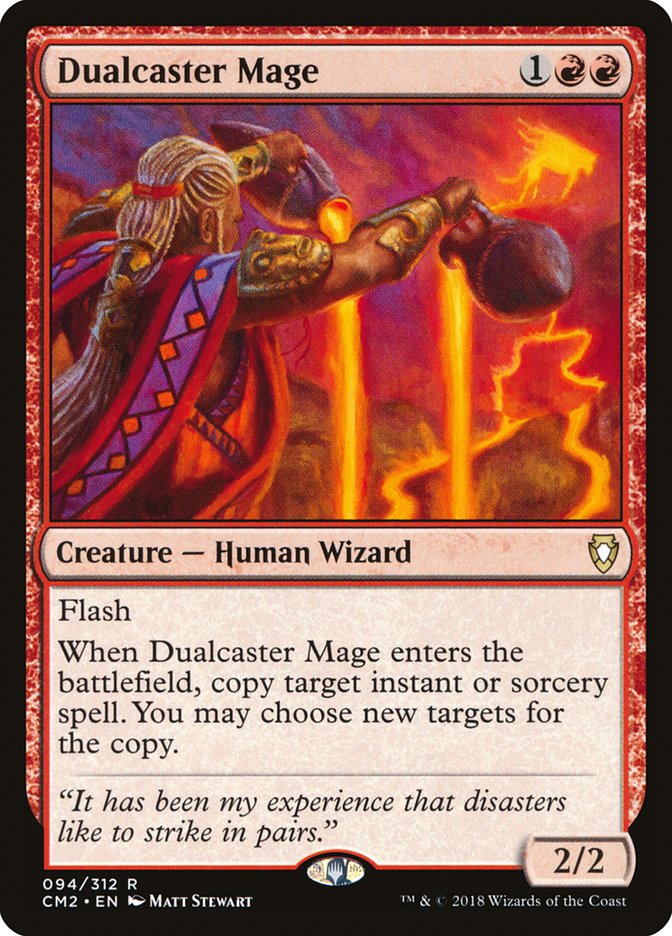 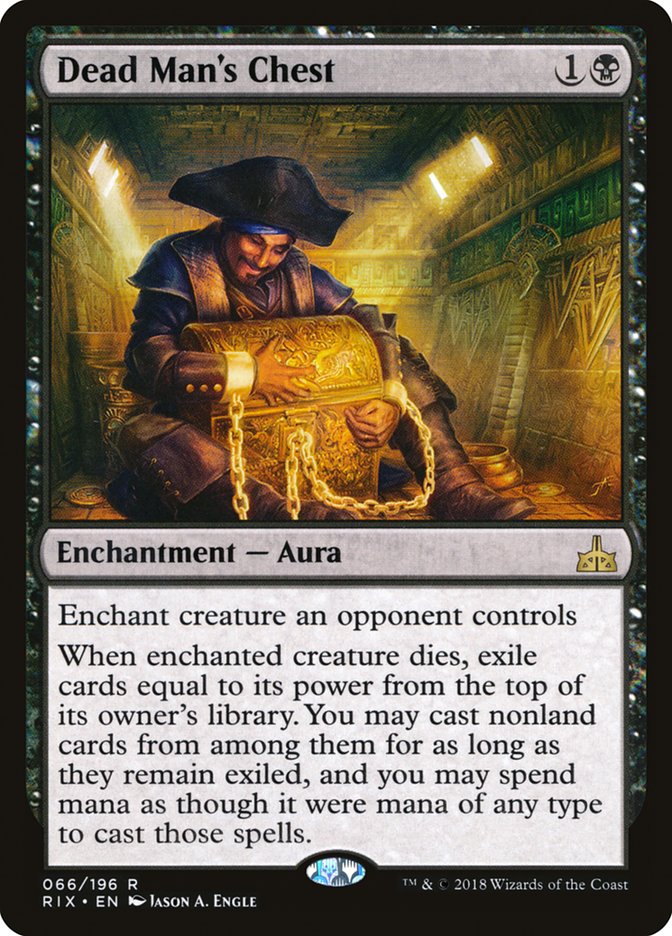 All of these are decent cards that I’m going to be happy having to fill out
red and black decks, but none of them really support the goals of our deck.
I’m really looking forward to playing with Reality Scramble, but I’ll save
that for a different deck. 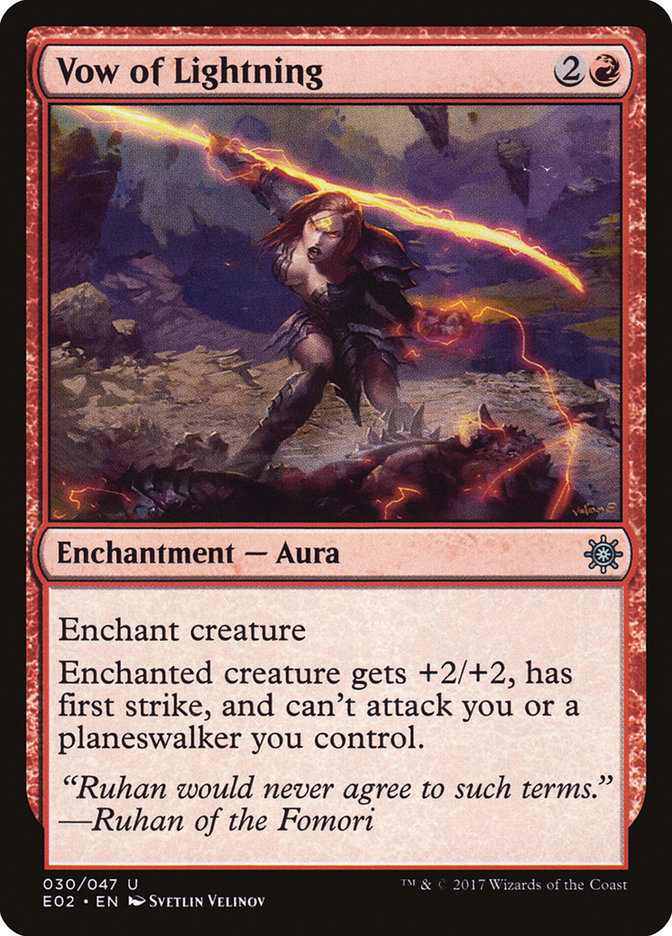 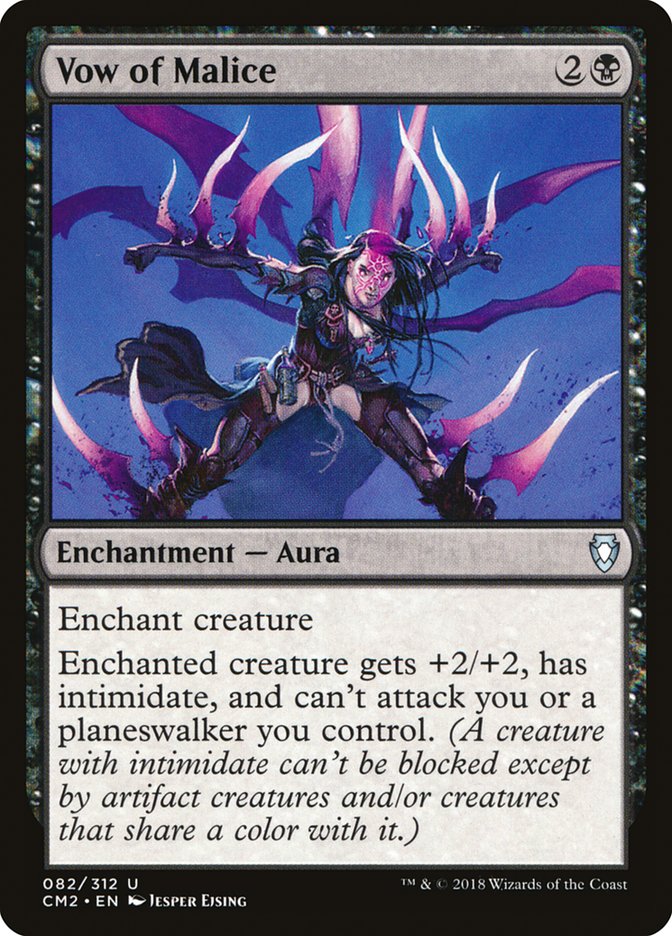 It occurs to me that playing these cards on opponent’s creatures that
aren’t Xantcha could end up making them big enough to block and kill
Xantcha, and that might lead to some unfortunate combats. The Vows fit in
theme, but I think the lines of play will end up not working so well, so I
think they’re safe cuts as well.