Dominaria
booster packs and singles are out in the wild-how exciting is that? This
set is just chock full of amazing cards no matter what sort of Magic you
play. But if you’re a Commander fan like me, the set is loaded with great
cards. I’ve written about building with
Jodah
, the buy-a-box promo,
Firesong and Sunspeaker
, the return of
Squee
,
Yargle
, and
Slimefoot
last week, and I feel like I’ve just scratched the surface of the new
possibilities!

When picking the commanders I wanted to write about, I tried to steer at
least partially off the beaten path, but for this week I can’t hold off.
Every Commander fan who loves to grind out value for days saw this card and
immediately started drooling.

You know what I’m talking about. Value Town. 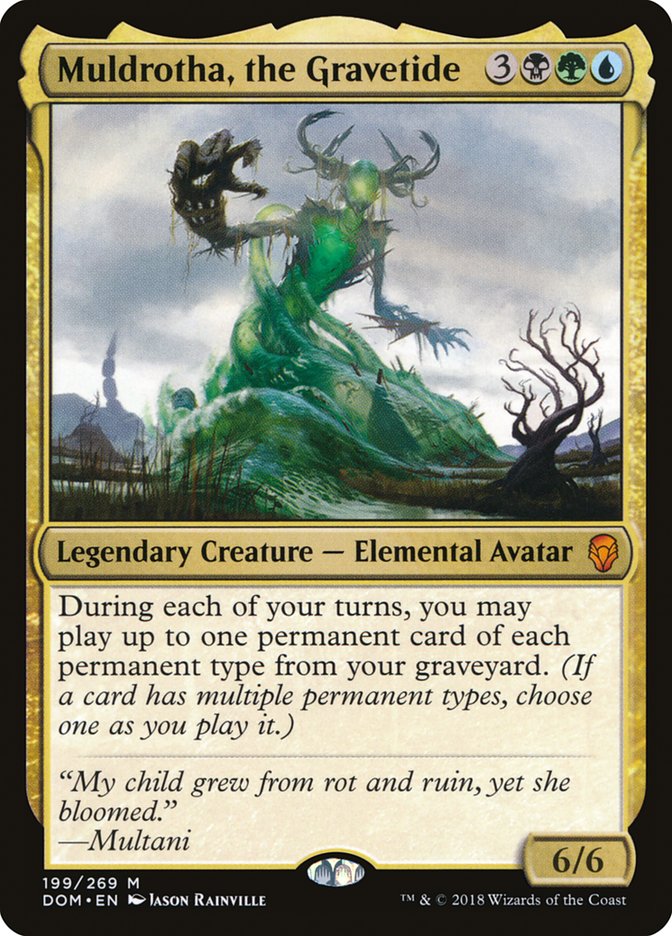 That is some super cool artwork sitting over top of a pretty incredible
text box. Sultai has long been about leveraging your graveyard for
resources, and Muldrotha epitomizes just about everything you’d want in
green, black, and blue. To maximize Muldrotha’s potential, you’d want to
play lots of permanents spread out across all permanent types, and either
have a lot of mana available, or play a lot of cheap options. If you can
actually play five cards out of your graveyard, that’s some pretty serious
card advantage right there. But even if you only play one or two extra
cards during each of your turns, that’s still going to be some great value.
So, let’s get cooking!

Now Muldrotha’s power is pretty straightforward, so your opponents are
going to be very interested in nuking your graveyard early and often. Which
leads me to think a few countermeasures might be a good idea. Ground Seal
does a good job of preventing individual cards from being targeted by exile
effects, like Scavenging Ooze. A good many of the more popular ways of
clearing out someone’s entire graveyard, such as Bojuka Bog and Nihil
Spellbomb, rely on targeting a player, so we can play Witchbane Orb to cut
off that avenue of attack. Then there is Voidmage Husher, which can counter
the activated ability of something like the Spellbomb or Tormod’s Crypt.

The nice thing about all those remedies is that they’re permanent based, so
if your opponents deploy counter measures to your counter measures, you can
potentially just replay them again during your turn.

Even with a few countermeasures, people are going to try and stop your
graveyard shenanigans, so I think a wise angle of play is not to go hog
wild with filling your graveyard. Instead, play out your value permanents,
and during the natural course of the game some of them will end up in the
graveyard. If you’re just grinding out one or two cards out of your
graveyard each turn, perhaps your opponents won’t panic.

Put Stuff in the Graveyard

That said, we’re still going to want to leverage our commander’s power
sometimes, so I decided to sprinkle in some cards that can push resources
into the graveyard. Something like Buried Alive is basically a three-card
tutor in a Muldrotha deck and will ring all the alarm bells from your
opponents, so I decided instead to stick with single shots from Entomb and
Corpse Connoisseur. Going to get your one answer or value card shouldn’t
attract too much attention, right?

A lot of value creatures have enters the battlefield triggers, so I decided
to add in some ways to sacrifice a creature for profit and then you can
replay it with Muldrotha. Merfolk Ranger and Jadelight Ranger are both
value creatures that can stock your graveyard on occasion.

Okay, so let’s choose some sweet permanents that might end up needing to be
replayed from the graveyard!

Now I generally avoid playing fetchlands in Commander and recommend you do
the same (see my article
Let’s Talk About Lands
to see why), but there are going to be exceptions. The Gitrog Monster is
one obvious exception, and I also think Muldrotha fits too. They are super
easy to get into the graveyard, so you can replay each turn. Similarly,
Myriad Landscape and Blighted Woodland provide some nice ramp options.

Mirrorpool is a card I’ve sprinkled into several Commander decks after it
rotated out of Standard (sigh…), but I’m extremely excited about it here in
Muldrotha. If you’re already playing value creatures, you certainly would
love to copy them early and often, and looping Muldrotha is a good way to
do that.

Command Beacon is a slam dunk for us here. Muldrotha is probably going to
have a big fat target on its head that may make it difficult to play from
the command zone after a while, so once you get Command Beacon in rotation
it’s bye-bye Commander tax!

Seal of Primordium is a slam-dunk inclusion here, and I also like Vessel of
Nascency since it’s searching for a permanent card while also putting some
extra cards in your graveyard.

Rancor is a potent creature enchantment that can be hard for opponents to
stop, but occasionally it’s going to go directly into the graveyard so
being able to rescue it with Muldrotha is amazing (especially given that
Muldrotha could certainly use the power boost and trample).

Song of the Dryads and Imprisoned in the Moon are two fantastic
enchantments that are great ways to stop problematic commanders that might
otherwise be difficult to stop. Typically, they only temporary stop the
madness since most Commander decks have ways of destroying enchantments
eventually, so being able to so easily replay them with Muldrotha makes
them even better.

I’ve also included some good quality enchantments that your opponents will
likely want to destroy at some point anyway, so they’d definitely be good
to replay again. I love that Agent of Erebos can count as either your
enchantment or your creature for the turn.

There are quite a few artifacts that sacrifice for effects and many of them
work perfectly in our Muldrotha deck. I’m particularly grooving on Lotus
Petal, since it can let you cast Muldrotha a turn early, and then you can
play it again right away from the graveyard, giving you an extra mana to
cast something else if you want.

Speaking of, I thought this would be a perfect place for Inspiring
Statuary, letting you leverage artifacts on the battlefield to help you
play more non-artifacts from your graveyard than you’d otherwise be able
to. In fact, the already busted Paradox Engine could really let you go nuts
casting multiple cards with improvise off the same artifacts.

Baleful Strix, Solemn Simulacrum, Phyrexian Metamorph, Wurmcoil Engine, and
Noxious Gearhulk can be either your artifact or your creature for the turn,
all while generating sweet, sweet value!

Here we go, the good citizens of value town, and the sheriff is none other
than River Kelpie! Just remember while the card is insane in Muldrotha,
there are a couple nuances to how it works you’ll want to keep in mind. If
you cast another artifact, creature, enchantment, or planeswalker spell
from a graveyard, only the second ability triggers. That’s because the card
is put onto the stack, not onto the battlefield. If you cast River Kelpie
itself from your graveyard, neither ability triggers. The first ability
doesn’t trigger because River Kelpie is put onto the stack; the second
ability doesn’t trigger because it works only while River Kelpie is already
on the battlefield.

Chief Engineer lets your creatures return the favor from your artifacts
under Inspiring Statuary. Spore Frog does a nice job of discouraging other
people from attacking you to the point that you may not even need to keep
casting it each turn. Vampire Hexmage combines with Dark Depths over and
over if Marit Lage needs some help sticking to the battlefield, but I also
like it as a planeswalker assassin.

Venser, Shaper Savant is cool as a pseudo-counterspell. You can play it
from your graveyard, then target itself with its ability to put it back
into your hand for counterspell duty.

For planeswalker I decided to keep with the grindy value theme and pick
ones that destroy problematic permanents.

Lastly, I wanted to pepper in some non-permanent spells for the occasional
circumstance that calls for something more: a few counterspells to keep
people honest and Damnation to reset the field. Eternal Witness (assuming
no Ground Seal) can be used to bring one of these back.

Spitting Image seemed like a good choice for the deck, delivering a copy
effect for value creatures you can recast by discarding a land that you can
then play from the graveyard. Aw, yeah that’s value gravy right there!

So, what do you think? I know there are so many more great cards you could
play in a Muldrotha deck that I didn’t make room for, but which ones do you
think are serious oversights?


For more Dominaria Commander goodness, be sure to check out
Sheldon Menery’s Dominaria Review for Commander, Part 2
. He goes over red, green, multicolor, colorless/artifacts, and land. Which
cards rises to the Top 3 for each section?

And make sure you don’t miss the
return of the Commander VS series with Season 11
! They spice things up for the inaugural matchup by adding a color to their
chosen commander’s identity. Justin adds green to Ixidor, Reality Sculptor;
Stephen adds white to Gonti, Lord of Luxury; Jeremy adds green to Marchesa,
the Black Rose; and Jonathan adds black to Kozilek, Butcher of Truth-now
with spells!