These Commander 2017 decks are really well made. They play great
against each other right out of the box and the Eminence legendary
creatures make fantastic Commanders. They also make fantastic jumping-off
points for decks capable of being competitive against decks that Commander
veterans have constructed from the ground up.

With linear decks that have a strong tribal focus, it’s not difficult to
find additions that will juice up the power level, and after some reps
playing the deck, it won’t be tough to figure out what can be cut to make
room. For instance, with Feline Ferocity there are a handful of “Cats
matter” cards from Amonkhet and Hour of Devastation that
drop right in: Regal Caracal and Pride Sovereign jump from the sidelines of
Standard right into the deck. There are a handful of Vampires from our
recent return to Innistrad that we would want to add to Vampiric Bloodlust,
and since Edgar Markov is Mardu, Vampire fans will be keeping a close eye
on the white Vampires from Ixalan as they are previewed.

I thought about running some columns where I write about making tweaks and
upgrades to these precons as I have done in the past, but I think for the
most part the upgrades are going to be straightforward for Commander 2017. Just pull up your favorite Magic card database,
plug in the relevant creature type as a keyword, and great choices will pop
up.

Instead, I think it will be more useful and fun to look at some of the
secondary new legendary creatures and ponder how to make decks that best
utilize their abilities.
A few weeks back
I talked about Mairsil, the Pretender. Today, let us talk about O-Kagachi,
Vengeful Kami! 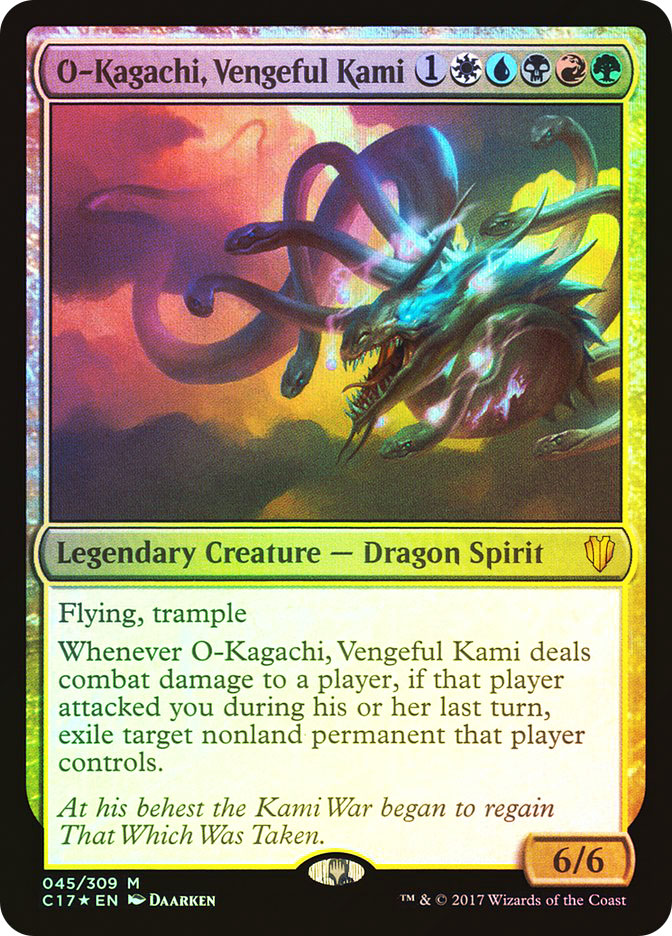 Now, if you have been playing Magic for a while, you will remember the Kami
from Kamigawa block. There were a fair number of “Spirits matter”
cards peppered through there, and if you still have some of those cards in
your Commander stock, I bet when you first saw O-Kagachi, Vengeful Kami,
you thought of finally being able to go full-tilt Spirit tribal with
soulshift shenanigans and visions of chaining Zubera Spirit triggers
together. I know I did!

But when I started sketching out deck ideas along those lines, I realized,
much like any tribal-focused deck, most of what I was going to put in there
would be the same as what others would do. Does anyone want to spend
Tuesday afternoon reading about Bennie’s take on Spirit tribal?

So I took a step back and looked at O-Kagachi, Vengeful Kami again. Other
than relevant creature types, it is not inherently a tribal card. What it
does have, though, other than amazing art that looks great in foil, is a
significant body and a cool triggered ability that really gets your mind
working when you think about the implications.

First off, just by the stats it is a 6/6 with flying and trample, which is
decent value already for six mana. Anything that boosts its power is going
to push it into serious threat territory very quickly.

But the exciting part of O-K is the remaining text box:

“Whenever O-Kagachi, Vengeful Kami deals combat damage to a player, if
that player attacked you during his or her last turn, exile target
nonland permanent that player controls.” 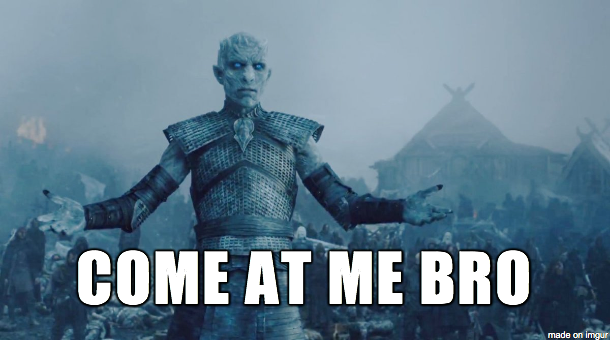 There are some interesting implications here. With two forms of evasion and
a sizeable body, having O-K deal combat damage is not going to be too
difficult. And that triggered ability is a doozy: exile target nonland
permanent! Just summon up the memory of any Commander battlefield state.
Any of us can quickly recall examples of nonland permanents opponents
controlled that deserved to be exiled, and exiling is so much better than
destroying in a game of Commander. Yes, O-Kagachi, let us exile all the
things!

But hang on there, Spirit Dragon—not so fast. There is a catch; there is
always a catch! You only get that sweet, sweet exile trigger if the player
you dealt combat damage to had attacked you during his or her last turn.

So here is the dilemma. Think back to that Commander battlefield state and
recall all those nonland permanents that deserved to be exiled. Behind each
one of those was a player who did not want them to be exiled. Luckily for
them, they can simply not attack you and not have to worry about O-K’s
sweet, sweet triggered ability.

For some players, this would be a feature, not a bug. In this way O-Kagachi
makes the ultimate pillow-fort Commander, letting you amass mountains of
cards from all five colors to wave away attackers with a legendary creature
who does the same thing. While I can appreciate giant epic four-hour games
of Commander and the struggle to defeat a near-insurmountable pillow fort,
what I find really cool about O-K is going the opposite direction and
making use of cards that I rarely see played in Commander. 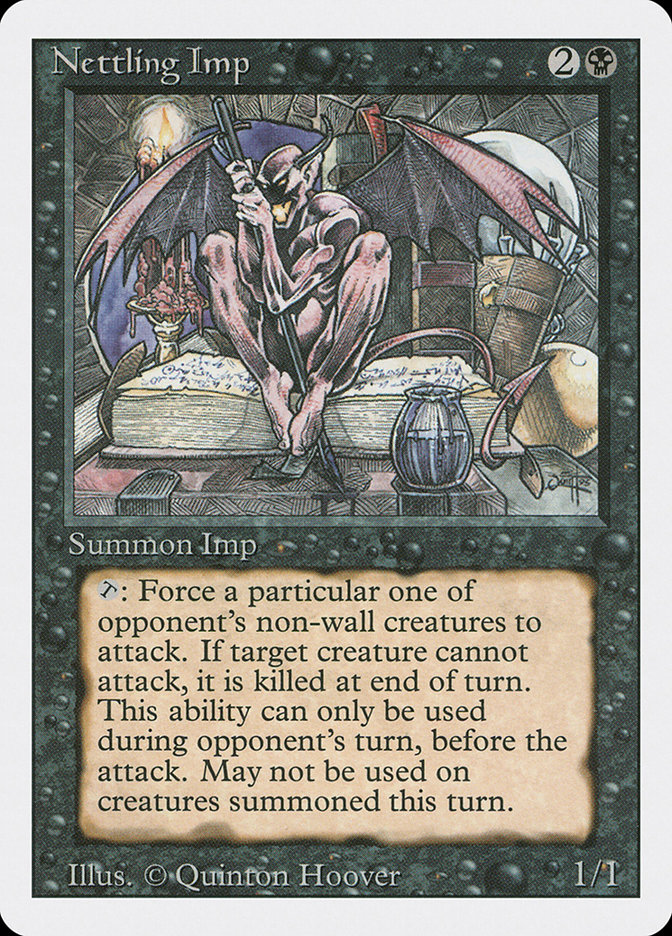 This is a flavorful, fun card from the very beginning of Magic’s history.
The idea was fun—have your nasty, rage-inducing Imp provoke your opponent’s
creature into attacking you so that you could block it and kill it with
your presumably larger creature. Of course, that begs the question—if you
have a larger creature, why are sitting back to block with it instead of
just attacking with it? Then people figured out you could combo Nettling
Imp with something like Icy Manipulator so that the taunted creature that
could not attack would just die of impotent rage.

Over the years Wizards has made quite a few cards with spins on this taunt
ability; some have turned out to be okay Limited cards, but I almost never
see them make the cut in Commander. O-Kagachi, Vengeful Kami gives us
incentive to provoke attacks, and since it’s five colors, we can jam all of
the Nettling Imp variants we want into the deck and see what happens!

Okay, so we can provoke one or more of our opponents to attack with cards
like Rage Nimbus, Shipwreck Singer, and Basandra, Battle Seraph in a
multiplayer game. How do we make sure they attack you? Sure, annoyance at
provoking them will get the job done sometimes, but if you are threatening
a retaliatory strike with O-K, they may very well choose to attack each
other. Well, that is actually not a bad fail state, no? If your opponents
are busy attacking each other, that is great! Maybe you can cast a
well-timed Berserk to kill off one opponent while destroying a threatening
creature at the same time.

To better incentivize their attacks at you, I decided to make liberal use
of the monarch mechanic. This does double duty because the extra card draw
will be helpful in keeping gas in the tank. Since we are five colors, we
get to make use of the very best of them! I was a little leery about the
ones that cost double of one specific color, like Custodi Lich or Regal
Behemoth, but I figured they were higher up the mana curve, and hopefully
my mana fixing will be good enough to handle casting them by then. I think
they are powerful enough to accept the risk.

Okay, so you provoked their creatures, they have taken the bait—now you get
to attack back! First up, I thought giving O-K haste would allow you to be
vengeful a turn earlier and that seems like a worthy goal. Temur Ascendancy
is a fine card, though your opponents will see that coming. Samut, Voice of
Dissent, on the other hand, can catch people unawares, jumping out at the
end of an opponent’s turn, and then during your turn, you can cast O-K and
immediately enter Vengeful Kami mode right on curve.

What’s better than vengeance for an attack, though? How about even more
vengeance! Giving O-K double strike from Fireshrieker or Rafiq of the Many
will give you two combat damage triggers. Or getting an extra attack from
Aggravated Assault or Finest Hour will give you two combat triggers. Of
course, the pinnacle of vengeance will be getting extra attacks with double
strike, though at that point you’re probably close to just beating someone
with Commander damage.

One interesting thing about O-K’s trigger is your opponent just needs to
attack you—they don’t need to land any punches. But I thought, in the
interest of fairness, if I’m going to be exiling a permanent, they should
at least dish out the damage. To offset that, I wanted to include some
lifegain measures.

Utilizing the monarch mechanic should help keep the card flow going, but
it’s obviously not entirely reliable, so I wanted to include some
additional ways to find some “nettling” cards and refuel. Seasons Past and
Rishkar’s Expertise have quickly turned into some of my favorite card
drawing cards in Commander and I would recommend trying them if you haven’t
already.

When I imagine how games will play out, I know there are going to be
creatures on the battlefield I definitely do not want to attack me, so I am
including ways to ensure that I had plenty of ways to weed them out. Since
we’re playing all five colors, we get to make use of the best ones.

I picked these cards to round out the deck. Since I’m five colors, many of
these slots are dedicated to mana fixing and mana ramp. I decided to lean
heavily on the green mana fixing, since it’s the best in the format, so I
juiced up the number of basic Forests in the deck and went whole hog on
cards like Farseek and Kodama’s Reach. I put Swan Song in here for the
surprise counterspell, and Sublime Archangel to help make O-K kill with
Commander damage quickly if need be.

Finally, I put Fractured Identity in here because the card just seems like
so much fun. I have yet to actually draw it or see it in action yet, but I
just know in my gut the card is going to create some fantastic stories.

What do you think of the deck? Is there anything big that I have
overlooked? How would you go about building it differently?