Rivals of Ixalan has no end of great cards for Commander! I’ve written about decks for each of the six Elder Dinosaurs and there are still more legendary creatures we can use. This week I wanted to focus on the insane former planeswalker, Ugin’s buddy and the progenitor of the Azorius guild: Azor, the Lawbringer! 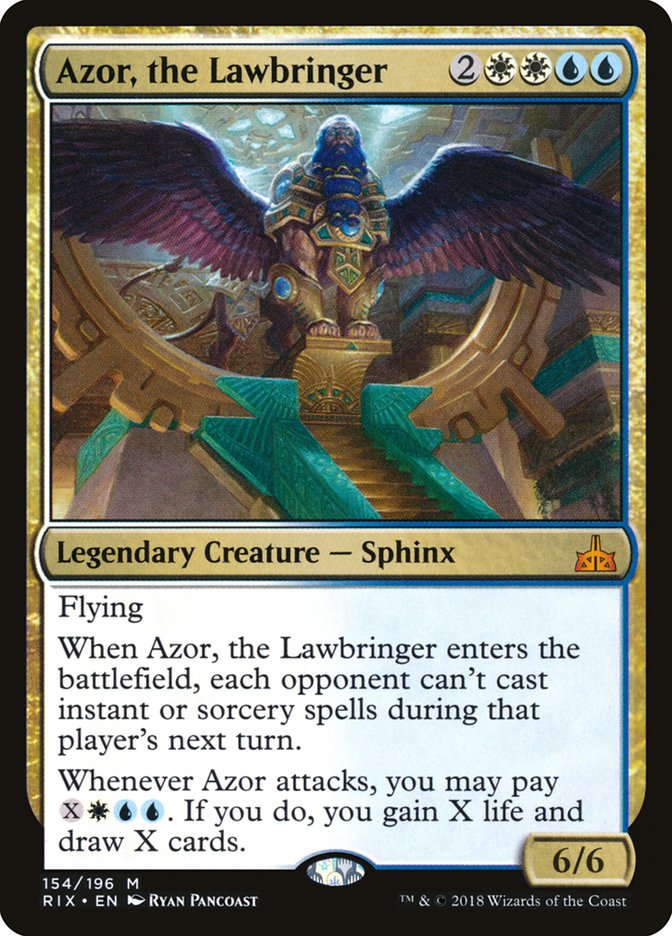 White and blue form the classic control color combination, and the number of control cards you have in the Commander card pool is quite deep. What I really like about Azor as a commander is how it encourages you to play a bit differently from a typical Azorius control deck. You’re probably tapping out the turn you cast Azor, and then each time you attack with Azor, you’re probably going to want to tap out too. How do you build a deck in control colors that shifts into a tap-out deck once you’ve cast your commander?

Let’s figure it out!

First off, we need to dip into the flavor of Azor. He is after all the namesake of the Azorius guild, so I’ve included a lot of things with “Azorius” in the name. Render Silent has the Azorius symbol very prominently displayed in the artwork and exemplifies what Azor and Azorius are all about. We now know that the original Sphinx’s Revelation was Azor’s, so let’s go ahead and add that to the mix. Then there are the Rivals of Ixalan Azor cards The Immortal Sun and Azor’s Gateway that would seem criminal not to include.

Many of the Azorius cards provide us extra mana, but Azor, the Lawbringer gives us a seriously good mana-sink whenever we need it, so let’s keep going on the mana production. The usual suspects Sol Ring and Solemn Simulacrum are a given, and for a two-mana rock I went with Thought Vessel, since the ability to keep more than seven cards in hand will likely be quite useful given the Sphinx’s Revelation on a Sphinx stick. Training Grounds is a wonderful card when our Commander has an activated ability, and for Azor it gives us a free extra two cards and two life.

The storage lands Calciform Pools and Mage-Ring Network work nicely with a more controlling stance we might have in the early rounds of the game, leaving up counterspells or answers and then storing up mana if we don’t need to cast anything.

Blue and white have no end of potential counterspells, but I’ve decided to learn away from too many hard counterspells that cost too much mana.

Instead, I’ve gone towards counterspells we could cast even with Azor on the battlefield and sucking up all or most of our mana. The creatures like Mausoleum Wanderer and Spiketail Drake pull double duty as attackers or blockers and can provide some measure of control even when you’re in tap-out mode. I’ve also added some counterspells we can cast for no mana like Foil and Force of Will. I’ve also added some cards that don’t cost very much mana like Swan Song and Glen Elenda Archmage’s activation so you can tap almost all the way out and still have a little bit of control.

Spell Swindle cast before you tap out for Azor can set up a way to keep mana up with Treasure tokens if you need it while giving you a rush of mana you can use for a huge Azor activation. Spelljack is another card you can cast before Azor to give you a free spell you can cast while you’re tapped out.

Azorius has no shortage of removal spells, and I’m particularly happy to have a lot of pinpoint removal spells, since trading one-for-one can be recouped by the cards you’re drawing with Azor’s activated ability. I always like being able to play spells like Darksteel Mutation and Imprisoned in the Moon because they can neutralize problematic commanders without killing them and letting them escape to the Command Zone.

Abolish and Aura of Silence are removal spells you can use even when you’re in tap-out mode, so they seem like great additions here.

A lot of the usual suspects for protecting your Commander are less than appealing with Azor. Swiftfoot Boots and Lightning Greaves are fine, but giving Azor haste isn’t really what you want to be doing—you want to have a lot of open mana when you’re attacking.

I like Mother of Runes and Bastion Protector, since they can come down earlier and provide protection without costing mana. Darksteel Plate provides protection with some mana investment, but it’s set-and-forget. Sword of Feast and Famine provides protection from black with some mana investment, but the main thing it does here is untap your mana at the end of combat so you can tap out as planned, yet still have mana to work with after you’ve refilled your hand.

Reverent Mantra can trade cards in hand for protection from damage-based or pinpoint removal for zero mana, so it can play well once we’re in tap-out mode.

Dragon Scales makes Azor a little hardier in combat but often is going to be a mana-free boost with the excellent vigilance ability that is so good in multiplayer. The +1 power increase to seven means that Azor can kill with combat damage in three attacks.

Mistmeadow Witch is a little expensive to be used to protect Azor, but if we’re already flush with cards and have a commanding battlefield presence, we can certainly shift gears away from a tap-out strategy and ride our Commander attacking through the air. In a pinch it can also mess with a large attacking creature our opponent may be threatening us with or blink one of our creatures that has a cool enters-the-battlefield ability.

We’ll round out the deck with some “good stuff” cards for our color identity. As Foretold can let us play a tap-out strategy and still be able to cast some spells for no mana. Frontline Medic allows us to counter an opponent’s X-spell if we need to, but more importantly it can let us get the batallion trigger to gain indestructible for our creatures and follow up with a post-combat Wrath of God to clean up a cluttered battlefield while keeping our creatures around.

Chasm Skulker, Venser’s Journal, and Psychosis Crawler all play quite nicely with our card-drawing engine. Alms Collector does a nice job of keeping your card advantage engine the only game in town so you can stay ahead of your opponents.

I like Authority of the Consuls and Blind Obedience to slow down any hasty beaters from your opponents, and also gain incidental life along the way. Monastery Mentor, Sunscorch Regent, and Dragonlord Ojutai are solid threats all on their own and can tempt out removal your opponents may rather hold for Azor. It’s always good to have these kinds of cards to put a strain on your opponents’ removal resources, especially since there seems to be a tendency to scrimp on pinpoint removal.

Of course, speaking of a solid threat, we’re happy to have Sun Titan around to bring back things from the graveyard. It makes a nice combo with Frontline Medic if you want to make your team indestructible each attack step.

What do you think? How would you go about building this deck differently? Do you think Azor, the Lawbringer is better as a Commander or one of the 99 in a different deck?

For more great Commander content, be sure to check out Sheldon Menery’s latest Commander column, where he celebrates the unbanning of Bloodbraid Elf with a do-over of a deck with Adun Oakenshield as Commander. Can he Voltron his one-power Commander and knock people off with Commander damage? Also, check in on Mark Nestico’s column where he argues that some cards are just no good for Commander, taking aim at Sol Ring and Paradox Engine among others. Does he make some good points? As a counterpoint, I wrote a column In Defense of Sol Ring a couple of years back. And don’t forget to check in on the VS gang where Justin, Jonathan, Stephen and Jeremy do battle with four random decks pulled from the minds of Kyle and Danny West. They end up selecting Tsabo Tavoc, Tolsimir Wolfblood; Braids, Conjurer Adept; and Jasmine Boreal. Pop some popcorn, sit back, and enjoy the carnage!

Last but not least… did you hear about the Commander Celebration going on at SCG CON June 8th through 10th? I’ll be there, along with Sheldon and the Commander VS crew Jonathan, Stephen, Justin and Jeremy. If you’re within driving distance of Roanoke, Virginia, come down for a fantastic fun weekend and play Commander with us! I am super-stoked and hope to see a lot of you there!