, built around Lich’s Mastery, which he used to win the Starcitygames.com
Classic on October 28th. I finally got to give the new Standard a spin for
last week’s Friday Night Magic and won the night with my Golgari Midrange
deck. I’ve been itching to push hard on graveyard themes, utilizing
Molderhulk and Memorial to Folly, along with Golgari Findbroker and The
Eldest Reborn, but in the end I went the mana acceleration route with
Llanowar Elves, along with general good stuff cards including Doom
Whisperer and Arguel’s Blood Fast. Now, I know conventional wisdom these
days is that Doom Whisperer isn’t very good, but in my limited experience
with the card, I killed a lot of people with my playset of Doom Whisperers.
It’s a Baneslayer Angel with an ability you can activate immediately. It
has two forms of evasion and has a huge body. It’s a great value for five
mana!

While all the Golgari goodies has me jazzed for Standard, the other guilds
has captured my imagination for Commander. I’ve got super-sweet decks built
around Tajic, Legion’s Edge and Emmara, Soul of the Accord, and a nifty
Yennett, Cryptic Sovereign deck that’s leans hard on Dimir’s surveil
mechanic. Speaking of Yennett, be sure to check out the
Commander Vs guys Coliseum of Randomness: First Blood!
video from last week, when it appears that one of the chosen decks may or
may not have been my cryptic deck!

I also covered Izzet with a deck built around Niv-Mizzet, Parun but as much
as I think the spell-focused Izzet guild is cool, I’m a bigger fan of the
color combination’s focus on artifacts from recent past sets. I looked back
and saw a few recent Izzet legends I had not yet given the Commander
treatment, so I decided to put it to a vote!

Feeling like writing up an artifact-y Izzet Commander deck
next. Which Commander would you prefer me choose?

109 voters spoke, and Brudiclad was the clear winner!

Brudiclad is definitely one of the most interesting Izzet commanders to
come around in quite a while, and plays nicely with the token-making themes
found in blue and red. The downside of Brudiclad though is just how insane
things can get when a deck is focused super-tight on abusing Brudiclad.
I’ve played against just such a deck a few times, and it basically turns
into Archenemy – you have to kill the Brudiclad player, or disrupt him
early and often, or you just get run over. When putting together my list, I
think I’ll try to be a little less “all-in” with the Brudiclad theme and
lean more towards just having some fun with artifacts and copying stuff in
red and blue.

Brudiclad is also a pretty popular deck. I checked over at EDHREC.com and
there are 169 decks as of this writing. Instead of reinventing the wheel
from the ground up, I thought I’d start with the average deck generator
from the EDHREC database and then tweak the list from there. Here’s what it
looked like:

Yep, that’s a Brudiclad deck! But man, that’s not a mana curve, that’s a
mana steeple… ouch! Take a look at it compared to my standard mana curve: 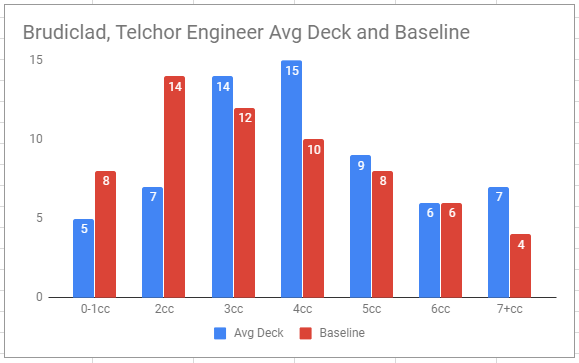 What we’ll want to do here is increase the count to eight cards.

First order of business is Bloodforged Battle-Axe. This is a great way to
make some tokens that can be turned into something later by Brudiclad. I’ll
also add a bit of control with Swan Song and pinpoint removal spells.

I include Hangarback Walker as a two-mana spell since it’s perfectly
acceptable to play it on turn two (or even turn 1 with a Sol Ring). What
we’ll want to do here is increase the count to 14 cards. I’m a little
tempted to cut the Cyclonic Rift here because everyone hates it, but
sometimes the card can save the table from someone trying to combo off.
Plus, if you make everyone spend mana to replay nonland permanents it might
give you a window of opportunity to pull off something cool with Brudiclad.

Arcane Denial and Fumble add a little more control to the deck, with Fumble
having the upside of potentially stealing some really cool Auras or
artifacts. Treasure Map provides eventual mana acceleration, card
selection, and then gives you three tokens to work with.

Chief Engineer and Vedalken Engineer are helpful in casting your expensive
commander ahead of time, while Slobad, Goblin Tinkerer can help you protect
it.

Tawnos, Urza’s Engineer is just a fun card that embodies the sort of Izzet
artifact shenanigans I was talking about.

What we’ll want to do here is decrease the count to twelve cards. I also
would like to add two cards-Magus of the Wheel for card drawing, and Arcane
Artisan for some additional token making. So, we’ll need to make four cuts.

Cutting Captain Lannery Storm for Arcane Artisan seems like a strict
upgrade. Fated Infatuation is super heavy on the blue mana, and I can see
sometimes in the early to mid-game where it would just rot in your hand.
Chaos Warp is a fine card and all, but three mana is a tough place to be in
Commander (
see my column from last week
). We’ve already got Commander’s Sphere and Worn Powerstone, so I’m going
to cut Izzet Locket as well.

What we’ll want to do here is decrease the count to ten cards. I didn’t run
into any cards that I was dying to add so these are straight cuts.

Flameshadow Conjuring is an okay card for our token-making plan and can
certainly lead to some crazy game states, but ultimately, I think it’s a
lot of mana investment for a risky payoff. I’ve already got Feldon of the
Third Path for this sort of thing, so let’s just stick with that.

I feel that Hedron Archive and Thran Dynamo might be going a bit overboard
on the mana ramp. I’ve added some ramp at the two-mana slot, and Storm the
Vault provides the potential for a huge amount of mana ramp when it
transforms into Vault of Catlacan.

I realize that Mechanized Production can potentially just win you the game
by your next upkeep, but it’s the exactly sort of card that alarms the
table and unites them against you. When I said I wanted to pull back from
the all-in approach with this deck, this is the prime example of such a
card.

Unwinding Clock… I’m not even sure exactly why it’s in this deck?

What we’ll want to do here is decrease the count to eight cards. However,
there are a couple cards I’d like to add to the mix-Echo Storm for the
copying–potentially quite a few–and Mystic Confluence for additional
control and card draw.

Siege-Gang Commander is a fine card in a Goblin deck but I don’t see it as
impactful enough for the five-mana investment in Commander, even in a token
deck. And Emrakul’s Hatcher is even worse in terms of card quality.
Tamiyo’s Journal is incredibly slow, though if you want to go nuts on the
combo kill aspect of Brudiclad, copying a bunch of clues and then
sacrificing them to fetch pieces of your combo might be exactly what you
want to be doing. But that’s not for me. Zndrsplt’s Judgment is kind of a
jerk card unless you’re just fully embracing a group-hug style of deck.

Since these cuts give us an extra card, I think I’ll add Solemn Simulacrum
to the deck at four mana as just an incredible value creature that’s also
an artifact.

We can keep the count here at six cards. However, I’d like to add Inferno
Titan here. This seems like a great creature we could potentially copy with
a token, and then turn all of our tokens into Inferno Titans and attack
with them. I figure having six or more Inferno Titans attacking is probably
a pretty good haymaker play, no? Okay, so let’s cut something. 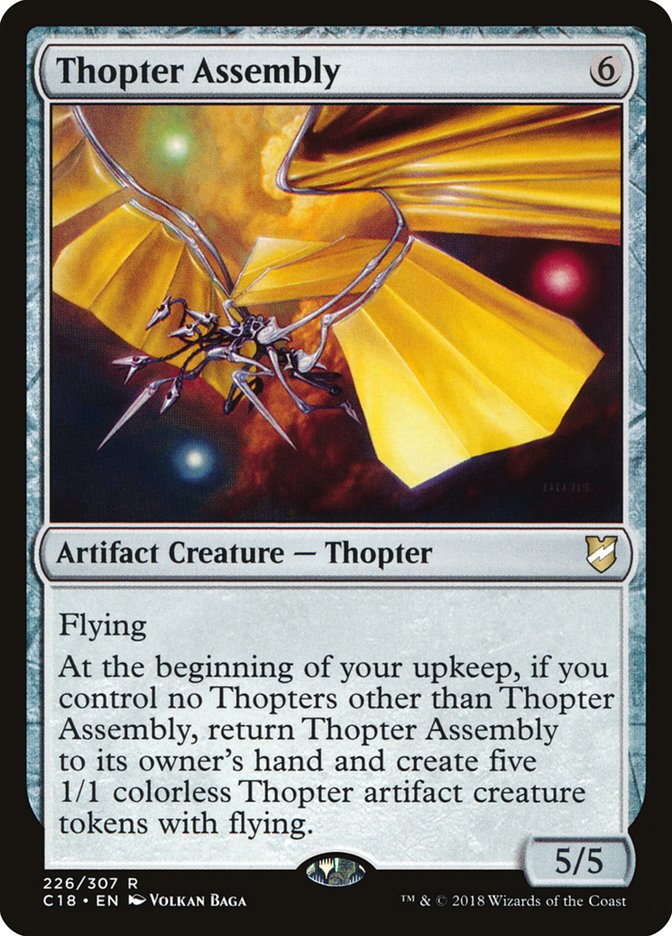 I feel odds are high that we could have at least a random Thopter around
that would prevent Thopter Assembly’s ability from triggering, in which
case what good is it other than a 5/5 flying artifact for six mana?


We’ll want to decrease the count here to four cards, and the ones that
remain are great inclusions. So, let’s cut!

None of these are bad cards and they all play strongly with our strategy
but seven spells at the top of our mana curve with an already expensive
commander is too much. Something has to go and I think Myr Battlesphere,
Utvara Hellkite, and Ancient Stone Idol are all super-scary cards that both
make tokens and can potentially be insane things to make token copies of.
And Blasphemous Act is grade-A removal we’ll want to keep in a back pocket
in case battlefields get too cluttered.

I cut one Island and added Hanweir Battlements because the sample deck
included Hanweir Garrison and it seems fine to have the possibility of
transforming it into Hanweir, the Writing Township. I also cut one Island
and added Kher Keep because, seriously, it’s going to be great fun to
transform a lowly Kobold into a Lord of Extinction one day. Telchor would
be so proud!

So, what do you think? What sort of changes do you disagree with? Are there
any cards that I overlooked?

! Right now, I’ll be posting Top 5 cards from each of my StarCityGames.com®
columns as a preview for each article, but I plan on adding other content
too. Also, I’ve gotten some cool video editing software that I’m slowly
learning, so the video quality will improve as I learn better techniques.