Wizards of the Coast (WotC) made an unscheduled update to the Banned & Restricted list today by banning Time Warp in Historic. 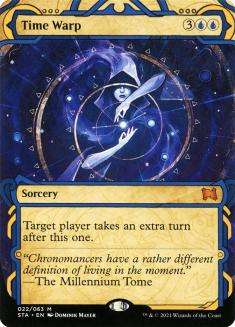 After the Jeskai Indomitable Creativity deck dominated the Strixhaven Championship last weekend, WotC is taking action against one of the pieces of the deck.

WotC cited the deck taking all Top 4 slots in the event and its ladder results as the reasoning for taking action.

The article also stated that WotC is prepared to take further action if it is needed. While Time Warp is one of the powerful cards in the Jeskai Indomitable Creativity deck, some notable players have pointed out that it isn’t the most problematic card from the deck.

The ban is slated to go into effect tomorrow, June 10.