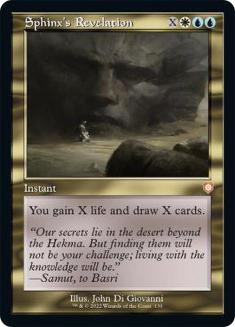 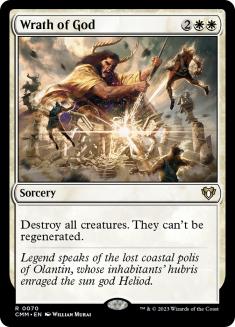 At Your Local Game Store

On September 2nd, 2021 Wizards of the Coast (WotC) hosted a show previewing many of the cards from their upcoming set Innistrad: Midnight Hunt. One in particular had control players around the world simultaneously give up on the archetype — Arlinn, the Pack’s Hope. Many knew they were already on borrowed time, but never imagined such an unmitigated disaster would occur to their beloved control decks. Shaheen Soorani, council leader of The Controlaholics, stated in an interview:

I’ve always despised control for a multitude of reasons. First off, I simply hate playing a control deck. Even when I know they’re so good that I’m forced to play one, even to a top finish, I still want to throw the deck away after the weekend. Oh, I also hate playing control mirrors. For whatever reason, control players think they’re performing some sort of aristocratic ritual when in reality it’s just a Monopoly simulator with the person having less real estate (lands) losing.

I don’t know why I’m punching down right now. It’s not like there’s anyone out there that thinks control’s been good in Standard for some time now. It’s been bad for a while, and only getting worse as it becomes less and less possible for any creature deck to flood out in this climate. Seriously, the amount of card advantage pumped into pretty much any playable Standard card is getting a bit ridiculous. When’s it going to end? 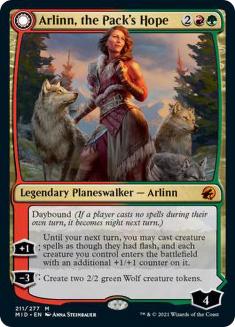 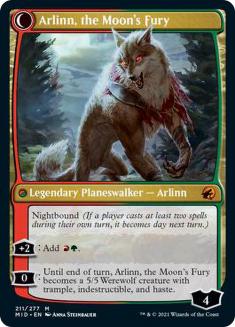 Arlinn, the Pack’s Hope looks like a card WotC would have printed ten years ago if control was as broken as Affinity was almost twenty years ago. Arlinn is everything a control player doesn’t want to see. It creates creatures, allows for flash counterplay against counterspells, and can turn into a pretty beefy creature itself. Like, seriously, this card is pretty messed up for anyone trying to control the tempo of a game!

We should probably stop talking about control at this point, because there’s just no way a counter-based strategy is remotely passable in Standard after Innistrad: Midnight Hunt releases. If the initial previews are indicative of anything, my best guess is that Standard will be 100% Gruul mirrors, so we should probably start figuring out what that looks like.

We should probably start things off by introducing a new game… mechanic? Is “mechanic” the right word? Regardless, we first checked in on the plane of Innistrad roughly ten years ago. Back then, there were Humans afflicted with a terrible curse that forced them to turn into Werewolves. Back then, however, they could all be on different sleep schedules, allowing you to have “flipped” and “unflipped” Humans and Werewolves. This all changes with Innistrad: Midnight Hunt.

Now the game will have an overarching day/night tracker signified with tokens. Day or night will be the same for both players at all times, and all cards with daybound and nightbound will all be on the appropriate side. Even cards entering the battlefield with daybound and nightbound will be subject to this rules change, meaning you can in fact cast Arlinn, the Moon’s Fury if something else has already triggered the game to go to night.

Werewolves, wake up. Who would you like to kill?

This rules change is flipping amazing, and is what I’m most excited about going into Innistrad: Midnight Hunt Standard. I’ve already told you a million times why I hate control, but I rarely express my undying love for midrange sequencing. I don’t know what it is, but I just love playing complex games when both players are trying to “get to the battlefield.” I especially love this when both players have planeswalkers they’re trying to protect, which is something we haven’t experienced in a while thanks to Embercleave. That’s all going to change, and I believe we’ll go back to a time where planeswalker are once again a focal point to Standard decks.

That’s honestly why the announcement of Arlinn and the Day/Night rules change really feels like I’m having my cake and eating it too. Being able to sequence in a way that allows you to “cast” the back side of a planeswalker is so unbelievably cool to me. It just opens the door to many potential lines, which is not something I’ve felt from Standard in a very long time. In all honesty, the game has felt more like “do you have it or not” Magic, which I’ve grown very bored of. 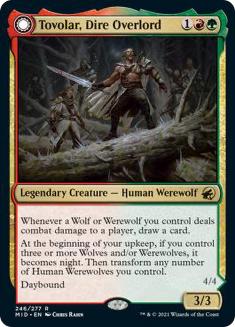 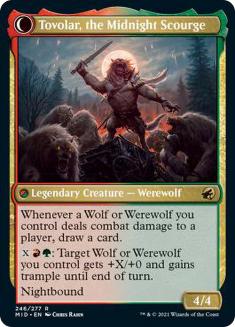 To really hammer this point home, let’s take a look at the new legendary creature Tovolar, Dire Overlord, a card which seems poised to share many of the same decks as Arlinn. Tovolar’s upkeep ability to trigger nightfall is particularly interesting when evaluating Arlinn in a multitude of ways. For starters, the sequence of Tovolar on Turn 3 into Arlinn on Turn 4, making two green Wolf creature tokens, allows for you to start your fifth turn with Arlinn transformed. This can give you a sizable threat to attack alongside your battlefield of creatures or a huge mana boost to cast Shatterskull Smashing or just some more threats.

Not only that, but if you already have a battlefield of Wolves and Werewolves that allow you to transform Tovolar, you can cast an Arlinn, the Moon’s Fury from your hand and then use its [+2] ability to effectively make it cost only two mana. I think this sequence in particular will be interesting when you’re falling behind on the battlefield, allowing you to catch up quickly on card stock.

The flexibility of Arlinn, the Pack’s Hope is exactly why I think it will be an all-star in Standard. It’s obviously not as powerful as a card like Gideon, Ally of Zendikar, but the problem with that Gideon was it was always the best card in any deck it was in. Arlinn will not only be a powerful addition to most decks, it will complement a variety of strategies trying to do specific things. Whether that’s flooding the battlefield with creatures, generating a ton of mana on key turns, or simply positioning oneself to attack from multiple angles, Arlinn has the capability to bring out the best in whatever strategy chooses to play it. 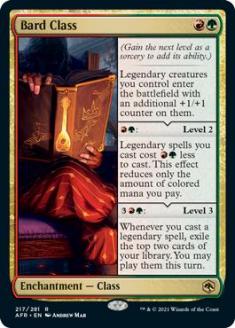 One of the most fascinating aspects of both Tovolar and Arlinn is that they’re both legendary. Bard Class was recently printed in a time where very few allied multicolored cards were in circulation. Innistrad: Midnight Hunt is the return of allied-color combinations, including a cycle of allied dual lands, which is a huge boon when trying to build the legendary-themed Bard Class deck.

I’m not going to lie — this deck looks rough. Luckily for us though, final grades aren’t in until the entire set’s released and I’m pretty sure there’ll be a couple more Gruul-based multicolored legendary permanents right around the corner. It’s just a hunch, ya know?

This deck is also in dire need of a maindeckable removal spell, as Thundering Rebuke isn’t really all that good (especially when it seems like Zombies will be a really good aggro deck thanks to the one-two punch of Champion of the Perished and Jadar, Ghoulcaller of Nephalia). In all honesty, the answer might just have to be playing Dragon’s Fire alongside Goldspan Dragon.

Ugh, I guess we have to play Goldpan Dragon!
Standard

I’ve really got a theme within a theme going on here. Obviously the Wolf/Werewolf thing is important, but I’m really putting a lot of my eggs into this Jaspera Sentinel + Magda, Brazen Outlaw basket, aren’t I? It’s no secret that this little combo is powerful, but how good is still to be determined. On one hand, Bonecrusher Giant can no longer make a quick meal out of either of them since it’s rotating, but on the other hand so is Embercleave. Maybe it’s not the biggest deal, as Magda can still search up a Dragon or Esika’s Chariot, but that’s about it.

So obviously these two decks don’t look that great relative to what we’re used to. That’s usually the case when it comes to preview season right before rotation. It’s especially rough given how busted Throne of Eldraine was! We’re all jacked up on eight-set Standard decklists, and now we’re supposed to be impressed looking at 4.5-set decks? No shot!

In reality though, Gruul is going to be disgusting once Innistrad: Midnight Hunt releases. It just doesn’t make sense to me that there’s any alternative. The color combination has access to a robust manabase with the best creature-lands in Lair of the Hydra and Den of the Bugbear. Not only that, but Shatterskull Smashing is going to be a house — I promise you that. It just got a much-needed dual land to support Werewolf Pack Leader and now has this awesome subtheme of Werewolves that all seem so busted.

Circling back to why I believe Arlinn, the Pack’s Hope will be phenomenal, the biggest boon for Gruul is going to be the robust way you can choose to use your mana. The archetype has many ways to spend its mana by casting, or not casting, spells. Werewolf Pack Leader, Ranger Class, Den of the Bugbear, Lair of the Hydra, and Tovolar, the Midnight Scourge all let you spend mana without casting spells. Then you’ve got lands that are spells like the aforementioned Shatterskull Smashing. I have 26 lands in the decklist above and that may very well be too few of them. You’ll always have something to do with your mana!

I also mentioned how easy it’ll be to play a third color in a deck like this. We’re not really going to worry about that right now, as we have many previews to go, but knowing it’s possible greatly increases the deck’s chance to be a mainstay in Standard. It’s just nice to know we can splash for removal or counterspells if we need to.

Anyway, I’m going to call it a night, as I’ve got to wake up in the day to play in the MPL Gauntlet. For better or worse, I chose Naya Winota as my weapon and was wildly off on my metagame prediction. Luckily for me, I think it’s not that bad, but it’s probably bad enough to justify me going nightbound to catch some zzzs.